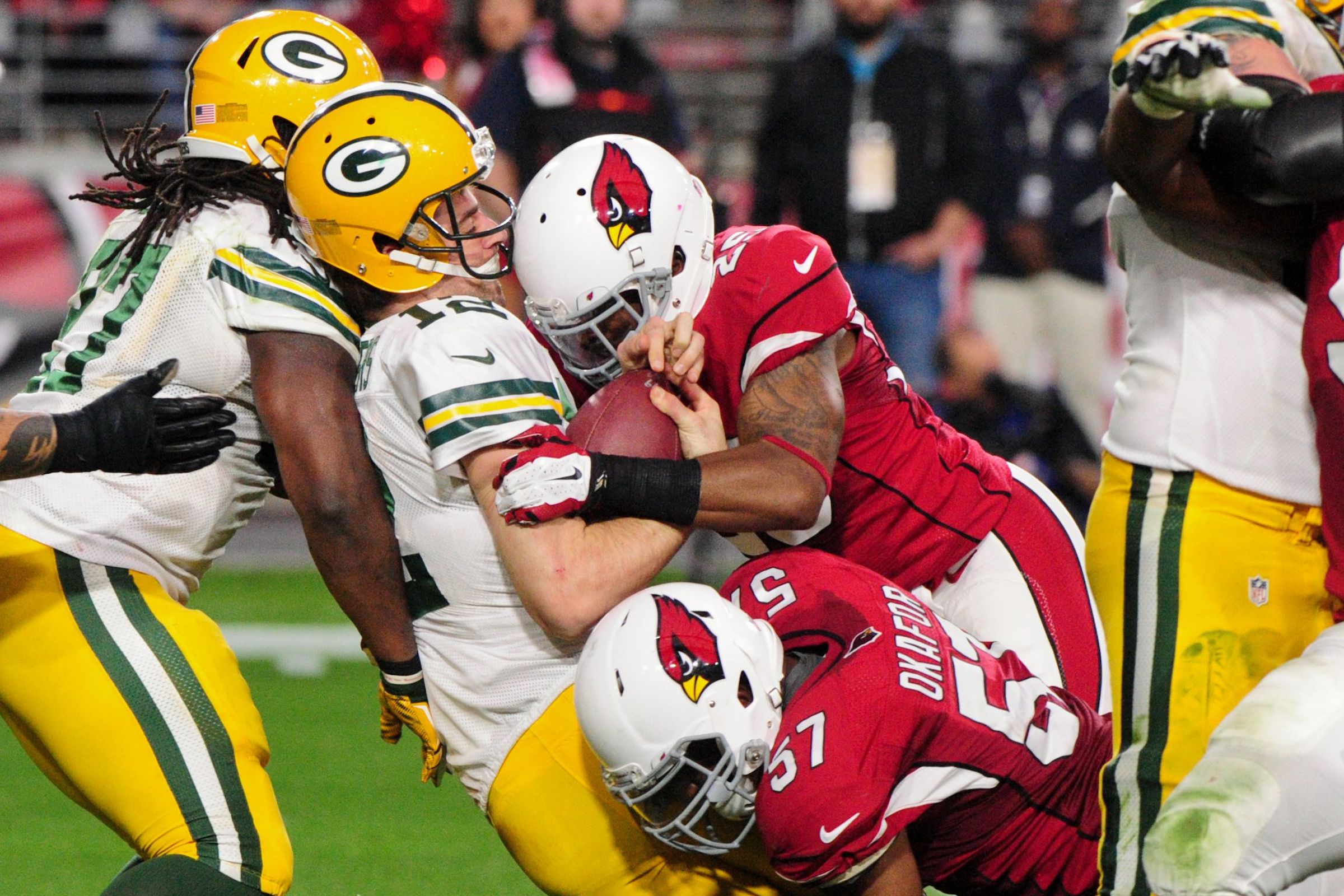 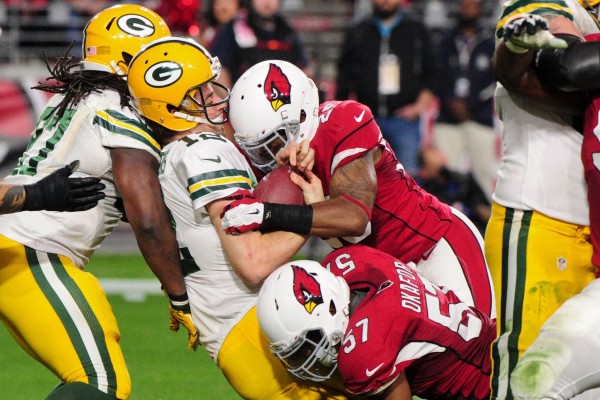 This game should alert Green Bay followers as to how far down the pecking order their team has fallen. Arizona is simply on another level, having their way with the Pack in every facet of the game.

Green Bay managed just eight points on a defense that was without their best player Tyrann Mathieu. Aaron Rodgers may be the best quarterback in the game, yet he can’t do much when he’s getting hammered on half his dropbacks.

Arizona’s David Johnson racked up huge numbers again with over 100 on the ground for the fourth straight game then added 88 in the passing game.

Eye-popping stat: Eight sacks on Rodgers for a 70-yard loss.

Fantasy carnage: Arizona’s defense with 35 points off a two-TD performance.

This game drove fantasy owners crazy as well as giving rival fans a chance to mock Bill Belichick for doing the unthinkable by kicking the ball away to start overtime.

Make no mistake the Jets were in control of this game early with a 17-3 lead. The Patriots got the game back within reach with a defensive touchdown, though.

Ryan Fitzpatrick was brilliant once again adding three more TDs to his 2015 resume. The last one came in overtime when he hit Eric Decker for the walk-off score on the opening drive. Fitz never let Brady have a chance to handle the ball in the extra period as the Jets needed just five plays to find the end zone.

Check out Belichick’s presser post game as he answers questions about the strange decision to kick in OT.

The win put the Jets in control of their own postseason destiny and has Pittsburgh on the outside needing help.

Fantasy carnage: No one on New England helped fantasy owners, but Marshall and Fitz were a hot combo for 44 total points.

Pittsburgh’s playoff hopes got sidetracked by none other than Ryan Mallett, who led Baltimore to the unlikeliest of wins over one of the hottest teams in the League.

Mallett ended the game with 274 yards and a score, never turning the ball over. It seems his firing in Houston woke this kid up, and he is acting like a real live pro.

There is no technical detail that explains how the Steelers let this game slip away. They just looked past Baltimore, who should have been no trouble with their dismantled roster due to injuries.

The Steelers need help to make it to the postseason dance now.

Johnny Manziel had a chance to play hero in this game but due to some bad clock management by the team, he fell short in the end.

Kansas City doesn’t care about style points as Andy Reid said they only focus on wins, not point totals. Cleveland managed to hang around in this contest despite KC running over their weak defense on a long grinding opening drive.

Alex Smith finished the game with just 125 yards in the air but did get his offense in the end zone twice as KC won their ninth in a row.

Eye-popping stat: Manziel was 13/32 for around 40 percent passing. Ugh.

Fantasy carnage: Smith with 16 was the top option in the game for standard leagues in title week.

Washington is one of the most fun teams to watch right now. Kirk Cousins is an exciting quarterback that is in a great rhythm right now despite his major brain fart at the end of the first half as he took a knee for no apparent reason.

Cousins has earned himself a big fat contract extension that should be offered to him very soon. He now has as many touchdown passes on the year as one Aaron Rodgers.

The Eagles are the exact opposite of Washington. They are the dullest team to watch in the NFL. I don’t care if they run a play every two seconds. The plays are boring and usually unproductive.

Look for the Eagles to stick with Chip Kelly for 2016 despite the terrible results of 2015.

Washington wrapped up the NFC East with the Saturday night victory.

Fantasy carnage: Cousins with 32 points crushed it and killed me in fantasy play. Jordan Reed also came out with 24 points.

Brandon Weeden is on fire. How would you have liked to lose your fantasy championship to a team led by this guy who struggled for three years trying to get a victory.

Two scores in the air and one on foot by the Houston quarterback was plenty as the defense stifled an inept Titans offense that never got going with Zach Mettenberger taking the snaps.

The main concern for Tennessee was not winning this game. All their efforts should be focused on finding a real head coach.

Houston did not come out unscathed as Jadeveon Clowney went down with a foot injury.

Fantasy carnage: Weeden along with the defense.

Teams like the Dolphins make fans question the heart of pro players. Miami has quit on this season.

The Colts are an easy out for most teams, especially with Matt Hasselbeck leaving the game again with an injury.

It would be better for all NFL fans if the Colts would just go away but apparently they are still alive for a playoff berth.

This game was tough to digest.

Eye-popping stat: Tannehill with 38 passes and still no touchdown.

Earlier in the year, I thought the Jaguars were a season away from being decent contenders for a playoff spot. Now it looks like only the offense is that close. Their defense is one of the worst in the League and let a banged up Drew Brees completely dominate them.

Blake Bortles has a nice TD total of 35 on the season after throwing four in this game. A lot of those touchdowns on the year came when his team was in the hole and the defense willing to bend, though.

Eye-popping stat: 412 yards for Brees, who was hurt going into the matchup.

Fantasy carnage: Brees with his running back Tim Hightower combined for 56 standard points.

Jim Bob Cooter may be the MVP of Detroit’s season. Taking over the offensive coordinator position has turned Matt Stafford into a very good quarterback.

I know the former Georgia star is subject to a four-game slump at any time, but for now, Jim Bob has his boy playing as well as any passer in the League.

The Niners just couldn’t generate enough offense to hang with Detroit despite being down just three after the first half.

Eye-popping stat: No interceptions for either quarterback.

Another forgettable game this weekend saw two teams out of the loop when it comes to postseason play. Dallas has been a mess for over ten weeks while Buffalo just continues to devolve into a lackluster unit that Rex Ryan can’t seem to rally.

Even the usually exciting Tyrod Taylor couldn’t spice this game up. It took a third-string running back to generate any fireworks as Mike Gillislee turned in a 50-yard scoring run in the fourth.

Not a game to remember with very little on the line here.

Tampa’s bright spot of the day came when both their running backs, Doug Martin and Charles Sims, went over the 1,000-yard mark for 2015.

Chicago got the win on the backs of their rushers Forte and Langford, who accounted for 160 total yards. It was third string running back Ka’Deem Carey who did the damage on the scoreboard as he ended up with two TDs on the day to help the Bears to their first win in four weeks.

Fantasy carnage: Winston for the Bucs and Chicago’s kicker Robbie Gould. Not anything explosive.

This was the last game in Oakland for Charles Woodson and maybe for the team itself. It took a long game into overtime on Christmas Eve, but the Raiders were able to get the win for the future Hall of Famer.

Oakland came back from being down most of the game as they scored eight points in the fourth then Janikowski managed to nail a 31-yard field goal in OT to seal the win.

Derek Carr despite earning a win didn’t make it look pretty. His receivers have also fallen off the hot pace they were on just a few weeks back.

Fantasy carnage: Rivers at QB for SD and Murray at RB for Oakland.

Seattle seems to have all the good fortune needed to get back to the Super Bowl. They lose in week 16 yet still ended up clinching a playoff spot.

The Rams are just a bad matchup for Seattle, so I wouldn’t take this loss as a sign that Seattle’s hot run is over. Russell Wilson did finally throw a pick after being perfect the prior five weeks, but he did toss two more touchdowns.

The Rams had little trouble shutting down the Seattle run game that is down to third-stringers with little game experience and an over the hill Fred Jackson.

The Hawks travel to Arizona next week for what looks to be a nice one as the Cards still have a shot at home field over Carolina.

Eye-popping stat: Baldwin scored again this week as his streak of TDs continued.

Fantasy carnage: Wilson but not the deadly fantasy game that he had seen of late.

No Odell Beckham Jr. spelled doom for Eli and the Giants.

Adrian Peterson was not slowed down at all and rested after three-quarters and over 100 yards.

We’ll see if Teddy Bridgewater can keep up his nice play as the Vikes head to Green Bay next week to determine the NFC North championship.

Fantasy carnage: Jerick McKinnon was a cheap option on DFS as he scored twice in mop up duty.

Denver would not go away after being down 14-0 to the AJ McCarron led Bengals in this key AFC matchup.

The game would be decided in overtime, and it was the Bronco defense who saved the team once again. DeMarcus Ware secured a fumble by AJ McCarron as he could not handle the shotgun snap. Game over.

The win for Denver stopped their two-game slump and ensured a playoff spot.

New England only needs to win against Miami, however, to ensure the Pats hold serve in Foxboro throughout the postseason, however.