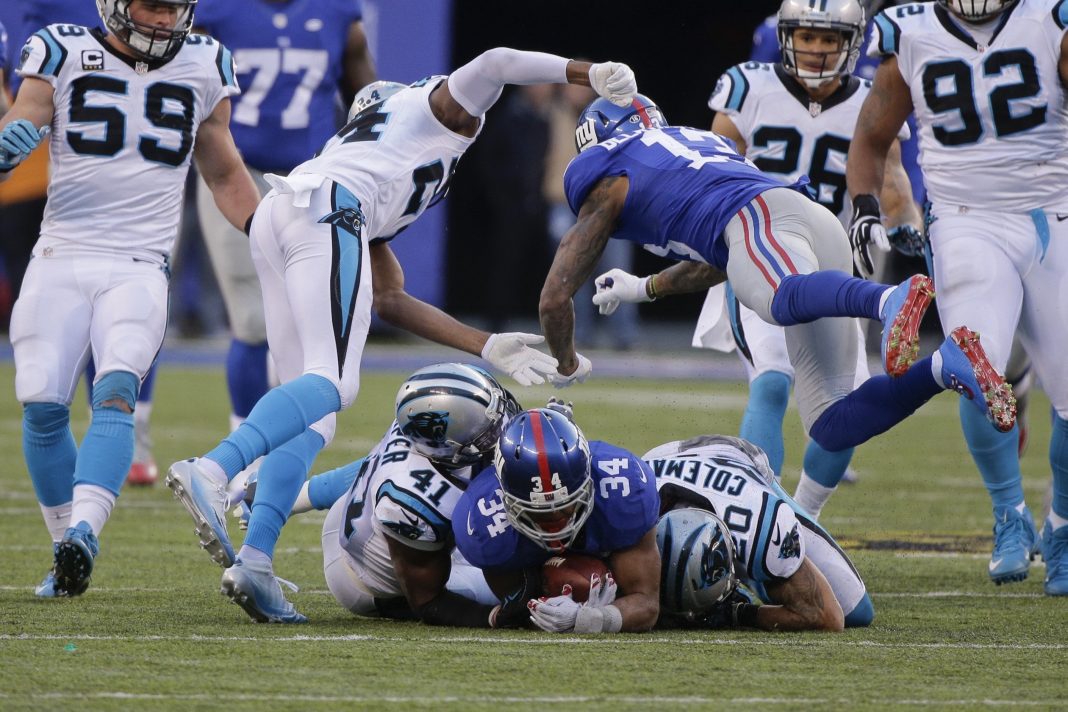 This game had it all. The dominance of the unbeaten Panthers. The uncanny ability of the Giants to wreck perfect season. An epic battle between two of the game’s best players in Odell Beckham and Josh Norman. And the best player on the field getting it done in the end.

Carolina jumped to a huge 28 point lead that evaporated with the help of a blocked field goal. The Giants came roaring back as Beckham and Norman traded shots all game long, a couple that should have gotten ODB tossed from the game.

Beckham was mentally thrown off his game by Norman, and it was clear to everyone, but did manage to catch the game-tying TD with under two minutes left.

Nice play but the real star of this game simply went out and showed ODB who was in charge. Cam marched his offense down the field calmly to set up the game-winning field goal and said after the game he was disappointed he didn’t get his team in the end zone. Guy is crazy competitive and didn’t care for the AI step over Beckham gave to Norman on the tying catch.

There is no answer for Antonio Brown. The wide out just goes superhero each week doing whatever he pleases. He’s just better than everyone else on the field.

Denver did have the lead early in a tale of two halves. Up 27-10 at one point, the stout Broncos defense couldn’t hold back the Pittsburgh offense any longer.

Ben Roethlisberger brought his team back with 21 second half points to get his Steelers to 9-5 and much closer to securing a playoff spot with two games left.

Brock Osweiler did his job and had his team on the march on a crucial drive, but Vernon Davis had another bad drop that cost Denver in this important matchup.

KC made it eight in a row with a win over the depleted Ravens.

Amazingly the injury riddled Ravens outgained KC in this game. It was the costly mistakes that gave Kansas City the victory.

KC now has a real shot to win their division with Denver falling to the Steelers. Andy Reid may be up for coach of the year after this monumental turnaround from the early season losses and injuries.

Eye-popping stat: Kamar Aiken is a star on the rise and had eight catches.

This Saturday night game looked to be a change for Dallas as they had a lead late in the game behind Kellen Moore replacing Matt Cassell. Despite three picks by the Dallas QB, his team was up headed into the fourth quarter.

New York couldn’t be put away though, and Ryan Fitzpatrick brought his Jets back with a ten point fourth quarter. The game was won on the leg of Randy Bullock, who knocked in a 40 yarder with 36 seconds left in the game.

As for NY, they are now relying heavily on Fitzpatrick and his two excellent wideouts, Marshall and Decker. Chris Ivory will still need to grind it out on the ground if they land in the postseason, but the running back is no longer the focal point of the Jets offense.

Eye-popping stat: 8, the number of receivers who caught a Fitz pass.

Fantasy carnage: Fitzpatrick but not a pile of points.

This game likely ended the year for Marcus Mariota after getting roughed up by the Patriots defense. The rookie was sacked on half his six drop backs and left the game with a knee injury.

New England totaled five sacks on the Titans’ QBs and Tom Brady orchestrated his banged up offense to 33 points. Just a normal Sunday for the Kings of the North.

This game was over at the half as NE led 24-3. Danny Amendola was injured in this game however and may take off the rest of the regular season. The good news is that Julian Edelman is almost ready to return to action though it seems unlikely the Pats would risk his return in the regular season unless absolutely necessary.

Eye-popping stat: 26 yards rushing for the Pats. They win however they need to.

Fantasy carnage: The defense for the Pats was huge for fantasy owners in semifinal matchups.

If there was a practice game set up for backup AJ McCarron to get ready to lead Cincinnati into the postseason, then the Niners were the team to ready the young QB.

The 49ers couldn’t generate enough offense to keep pace with the Bengals offense and got behind 21-0 before finally getting on the scoreboard. Blaine Gabbert had a forgettable game after playing well of late.

Cinci clinched a playoff spot with the win.

If this game was any indication of what a playoff game will look like with the AFC South Champion, then we are in for a snoozer in a few weeks.

The positive in this game was Brandon Weeden getting a win for the first time since 2012. Weeden came in for the injured TJ Yates and managed his offense to a victory by leading them to all 16 points. Good for the guy who got clowned after his disastrous Dallas experience.

It looks like the Texans will rep the AFC South since Jacksonville couldn’t beat Atlanta at home in J’ville. No one is afraid of the Texans though with the revolving door of the quarterback position over the season, no Arian Foster, and JJ Watt banged up.

Eye-popping stat: First win for Houston at Indy ever.

Fantasy carnage: None in this one unless you were trying to throw the game so your idiot brother could advance in your fantasy league. The Texans defense was pretty good actually.

This was a nasty rain soaked game that saw the Pack get the best of Oakland mainly due to the fact that they have Rodgers and the Raiders do not.

The Pack isn’t striking fear in the NFC headed to the tournament, but they can handle teams like Oakland usually. Derek Carr had two bad picks that cost his team dearly after being asked to throw the ball 47 times in bad weather.

After a great game last week, Eddie Lacy looked slow and out of shape again. If the Pack wins a single playoff game, it will be through the air and not with their runners leading the way.

The legend of Kirk Cousins is growing! I don’t want to get carried away, but the guy did give me like 40 fantasy points on DK this week and racked five touchdowns for his team, one on foot.

The Bills were knocked out of playoff contention with the whipping, and Rex Ryan is getting grilled for his defense’s poor play throughout the year. Mario Williams was also ticked about insiders in the Bills organization leaking reports of his imminent release after the season. Losing causes a lot of crying.

Washington is right in the mix to win the NFC North as they play Philadelphia next week who is tied for second with NY, behind the Skins in the division.

Fantasy carnage: Cousins with DeSean and or Jordan Reed.

While Arizona got an easy win after opening the game with the easiest TD drive ever, they did lose Tyrann Mathieu for the season with a knee injury. It’s tough to watch great players go down in non-competitive games against teams going nowhere like the Eagles.

Arizona used wrecking ball running back David Johnson to destroy the Eagles defense from start to finish. Johnson racked up 187 yards and three touchdowns in this cakewalk.

Carson Palmer left the game briefly with a finger injury but returned soon after that. Fantasy owners should keep a watch on Palmer’s hand as they enter championship week in standard leagues.

Arizona has the Packers next week then Seattle in the finale. Carolina only has Atlanta then the Bucs to wrap the season so it looks like Carolina will keep the home field advantage, but anything can happen.

Eye-popping stat: 6.4 average for Johnson on the ground and pound.

If Johnny Manziel wants to reach real fame for football related activities, then he should shadow Russell Wilson for an offseason.

Wilson is on some next level stuff right now. No QB in history has done what he is doing. After the demolition of the Browns, Wilson now has thrown three or more touchdowns with no picks in five consecutive games. Incredible.

Even down to third-stringers at tailback Seattle looks unstoppable, especially against Cleveland.

Manziel finished the game 19/32 with one TD, also one INT. Not an awful performance by the kid considering who he was up against on the opposing defense.

Eye-popping stat: See historical reference to Wilson above. Oh and Seattle punted just once in this game, probably to keep their punter loose.

There isn’t much left in the Bears’ tank as the season winds down. Teddy Bridgewater single-handedly rolled Chicago up in this one. Bridgewater ended the game with four touchdown passes and only three incompletions.

It looks almost impossible for Minnesota to get left out of the tournament at this point. they hope to get Adrian Peterson back next week after leaving this week 15 game with a tweaked ankle.

Fantasy carnage: Bridgewater with Diggs, who finally had another good fantasy day.

This game was relevant to fantasy owners who somehow put Danny Woodhead on their rosters this week. Congrats on that lucky pick. Dude scored four touchdowns on the now embarrassing Miami Dolphins who are now in vacation mode having squandered what should have been a good season for them.

The Chargers’ win over a bad Miami team didn’t mean much but the victory could have been the last one ever in San Diego as the team looks likely to bounce asap according to reports that say the Chargers have the most support among NFL owners to pack up and head to L.A.

Philip Rivers was choked up after the game and Eric Weddle signed autographs for over two hours in what looked to be a farewell salute to the remaining fans who hung onto hope despite a bad year on the field and most fans jumping ship mid-season.

Fantasy carnage: Woodhead in a surprise.

Matthew Stafford completed 88 percent of his passes as Detroit jumped on New Orleans early and never let up.

Drew Brees did manage to make the game closer in the end with some of his old magic, but it was too little too late. The Saints were hurt by some controversial goal line calls to end the first half that saw the Saints score on three different plays only to have penalties take the points off the board.