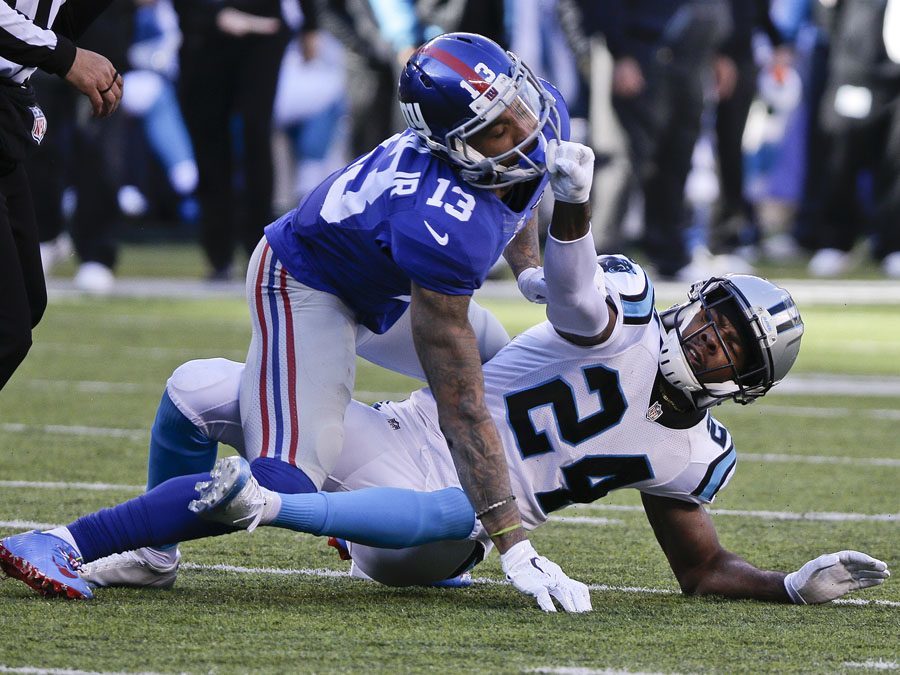 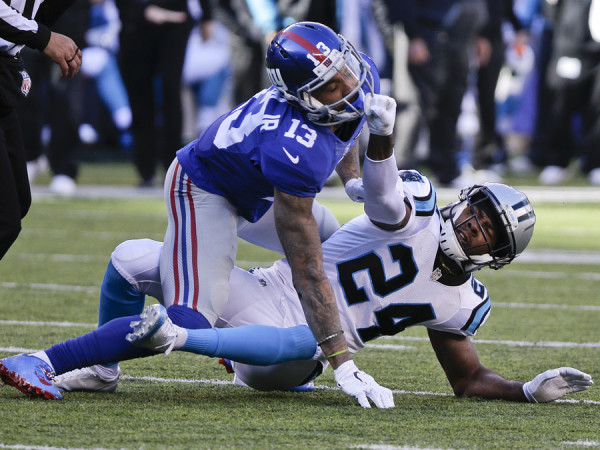 It is not easy for me to defend Odell Beckham. I don’t like the team on which he plays nor do I like the manner in which he carries himself. Don’t care for how the big media has made him into a god so early in his career either. I could do without the damn shampoo commercials too.

However, I’m not going to jump on the hate bandwagon for the NY Giants receiver for his actions this past Sunday as he and Carolina’s Josh Norman brawled their way through a 60-minute football game.

There is no place for the head hunting shot that Beckham took on Norman as the cornerback was facing the other way on a play that was over. Also, Beckham can stop excusing his own actions because he felt intimidated by the Panthers‘ pregame ritual of toting a baseball bat around the field.

Other than those two things, I’m fine with what went on between Josh Norman and Odell Beckham. I don’t want these two elite players to like each other, not even a little bit.  Hate is actually preferred. I love good sportsmanship, but all this modern day having dinner with the enemy the night before games is too much.

I guarantee Deacon Jones wasn’t having opponents over for a beer during the week as he prepared to wreak havoc on their livelihood.

This little squabble between Beckham and Norman has the talking heads on TV and voices of talk radio saying the most ludicrous things I can imagine.

“Baseball bats at a football game are a show of hostility,” one talk radio host said this morning. Uh, yeah it’s a damn football game where both sides are pretty amped up to run over the guys across the field from them.

Should FSU get rid of their mascot riding into the stadium with a flaming spear? And should we ban every mascot that looks intimidating? How about the vicious looking eye black painted like the Ultimate Warrior on many defensive players? Pretty hostile looking. Wouldn’t want the audience to get the wrong idea about football or scare the opposing wide outs.

I get that guys on the NFL Network have to tow the company line. The head shot by Beckham can’t be defended on any level, with concussions such a huge issue currently.

But when you have a guy like ESPN’s Ray Lewis calling out Odell Beckham for “going too far,” it makes me a little queasy. Mr. Lewis has no room to advise someone about taking things too far, having been involved in covering up a killing back in the day.

As for Josh Norman, this kid from Coastal Carolina University has benefited from all this controversy over two football players going at it harder than normal. He was a star on the rise already; now the casual sports fan knows Norman’s face and number. He didn’t back down from the media sensation that is ODB and is now sharing some of the spotlight.

An unintentional PR move of which Richard Sherman would approve.

We are in a new age of the NFL now. Violence for the sake of violence is frowned upon. Hitting is still a part of the game, but hatred fueled hitting is not going to be tolerated I guess.

I will agree that Beckham needs to control his anger. He should have been ejected from the game for his helmet shot on Norman, thus taking away any chance for NY to mount the amazing comeback we saw on Sunday. And now he is going to miss next week’s game after being suspended. Not exactly helpful to his team which is still in the mix for their division title.

Beckham has appealed the suspension of course, but don’t look for the League to budge since we are talking about a blatant helmet to helmet hit on a defenseless player at the whistle.

The NFL is evolving, and I’m all for it. I love the old school game but actually care about the employees who make this game happen each week. I don’t want to see guys take cheap shots on one another, but I will forever be on the edge of my seat when two high-level athletes go at each other with everything they have, hatred included.

We saw Norman and Beckham bring out the best in each other on Sunday, even though Beckham went too far. Had these guys been hugging each other after each play we would not have seen each guy rise to meet the other’s level. Their hostility made the game better, not worse.