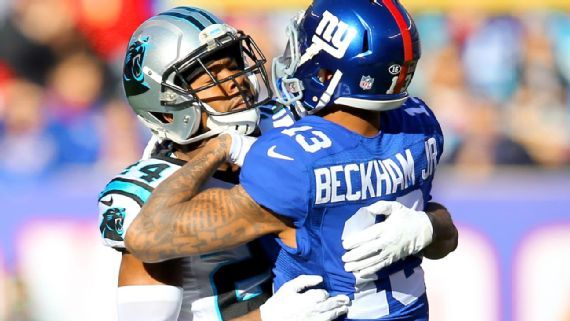 Alas, there’s more. After the Carolina Panthers 38-35 victory which saw an absurd amount of back-and-forth between Odell Beckham Jr and Josh Norman, we all had to listen to Norman run his mouth for 24 hours. Beckham, who drew three personal fouls in the game, has been suspended for the Giants upcoming matchup with the Minnesota Vikings, making New York’s fleeting playoff hopes a dim dream.

Of course, the Panthers aren’t out of the water themselves. Although Norman most likely will not face discipline despite starting the whole thing by throwing OBJ to the ground, the team is receiving some backlash for the way they treated the Giants’ wide receiver as a whole.

Carolina has been bringing a baseball bat out at warm-ups in honor of injured Bene Benwikere. They won’t be doing that again anytime soon.

“Because I’ll hear about it,” said head coach Ron Rivera after being questioned on his decision to end the tradition. “It’s the No Fun League for a reason.”

Well, I agree with you there, coach, but that’s not why it needs to go. A video of OBJ and Carolina practice squad member Marcus Ball getting into it pregame emerged, and during the confrontation, Ball had the bat. So for Beckham to say that he felt “threatened” by the Panthers players is more than reasonable. And then there’s another video of a player pointing the bat at the Giants as they ran onto the field. “Threatened” definitely describes it well.

Let’s also not forget that the Panthers verbally attacked Beckham and his hair with homophobic slurs before the game. Talk about taking trash talk way too far.