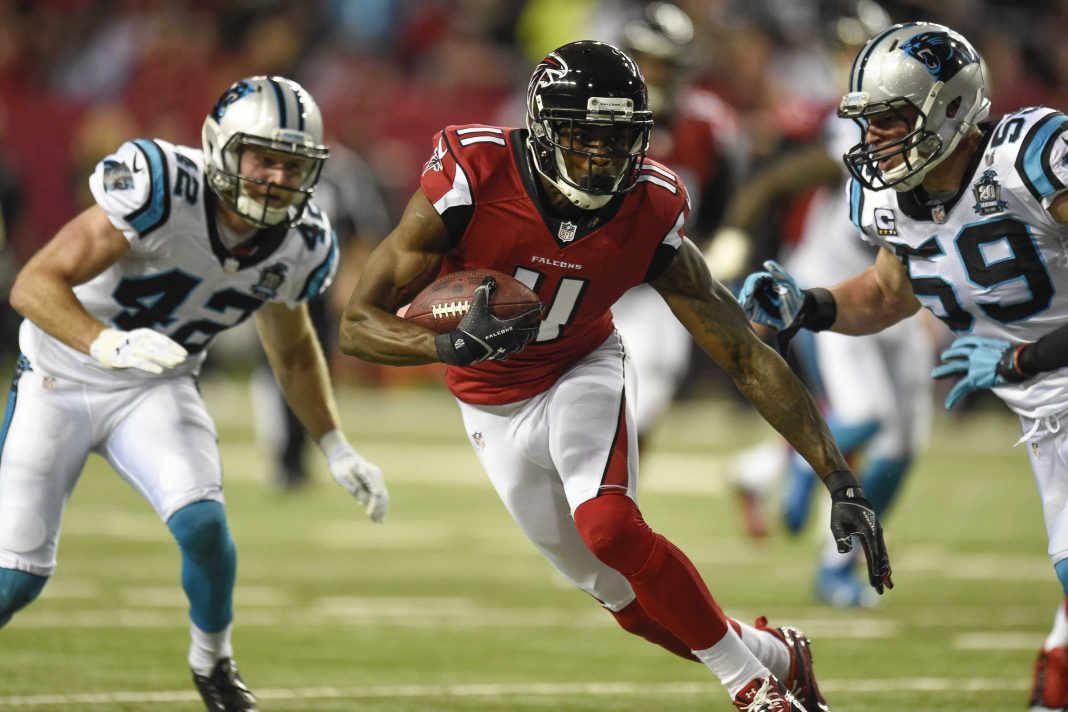 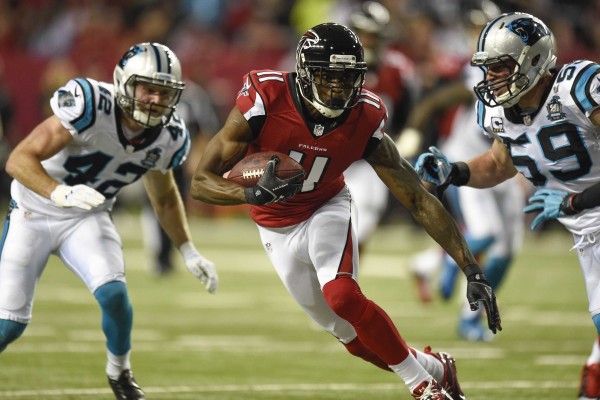 Two teams headed in drastically different directions. The home team Atlanta Falcons was just looking to regain some pride after being hammered 38-0 just two weeks ago by 14-0 Carolina. The Carolina Panthers, on the other hand, were looking to make NFL history, needing just two more wins to become only the third team ever to make it to an undefeated regular season.

The game opened up just like the previous matchup as Cam Newton lead his offense right down the throats of the Falcons D. Fozzy Whitaker was eating huge chunks of yards as Carolina stayed on the ground most on their opening drive. Whitaker would finish the half averaging 8.5 yards a carry, but it was Cam Newton who finished the drive off with an eight-yard run to go up 7-0 over the Birds.

Atlanta looked as bad as an alleged NFL team could on their first three offensive plays. A bad snap on first down started the mojo in the wrong direction. However, it was a flag on the Panthers’ Charles Tillman that extended the Falcons’ drive which should have ended after three awful plays.

On Atlanta’s first drive Roddy White was heavily targeted and ended the first half with two catches for 19 yards. The refs were making an obvious effort to keep this game in check after last week’s debacle with Josh Norman and Odell Beckham Jr. Cortland Finnegan was using the best of his instigating abilities early on as he tried to hook Devonta Freeman, who ran hard in the opening drive.

The red zone has not been a friend to Matt Ryan since week five, but he made a hell of a run on the ten-yard line that set up a Freeman scoring run. Ryan got popped after a seven-yard scramble to the Carolina four. Freeman walked in untouched on the next play to tie the game at seven a piece.

This game remained tied deep into the second quarter. Just like my Falcons to challenge an unbeaten team when they themselves have nothing to play for….except roster spots for 2016 for some.

Matt Ryan was feeling the effects of the big hit he took on his red zone run in the first quarter. I was going to be shocked if he finished this game.

Carolina was threatening with around five to play in the half as Cameron Artis-Payne was getting off along with Fozzy. The Panthers offense totaled 109 on just 12 carries in the first half. Carolina got a gifted first down after a review spotted them enough for a key first down.

However, Atlanta stood tall as they got a huge sack that cost Carolina 16 yards. The Falcons’ Phillip Adams dropped an interception on the next play that could have helped the ATL to better field position and a score to end the half.

Atlanta ended up starting their final drive of the half at the one-yard line after a brilliant punt by Norman. This drive was conservative and if you’ve seen all the late first half mistakes by Matt Ryan the past several weeks you can understand. 7-7 at the half.

The Falcons squandered a nice drive to open the second half when Shayne Graham came up short on a 43-yard field goal.

Carolina capitalized on their ensuing drive when they added three points on a 33-yard kick by Graham Gano. 10-7 Panthers but the Falcons not laying down.

Julio Jones snatched momentum by the neck and turned it in favor of his Birds when he ripped off a 70-yard touchdown over two defenders. Matt Ryan had been taking shots to his own detriment and this deep ball to Julio was no different. Ryan was hit as he released the bomb that saw Julio get in the end zone to take his club up 14-10 on the undefeated but reeling Panthers.

Cam threw another pass that should have been picked on his next drive. Carolina once again punted. This team had averaged 32 points a game coming into this divisional matchup.

Atlanta tried to give the game away when Ryan couldn’t handle a decent looking snap. Josh Norman scooped up the ball and gave Newton another shot at the Falcons’ defense.

Newton only managed to move his Panthers close enough for a FG that brought the game within one point, 14-13 Falcons.

Atlanta put together several nice plays on their next possession as Roddy White caught another pass for a first down and Devonta was simply brilliant in the open field. This drive was eating clock, making the upset more and more likely.

Freeman dropped a pass that would have converted on second down and Atlanta ended up getting a field goal from 37 yards out by Graham. 17-13 Birds.

Cam couldn’t get anything going on the next drive and gave the ball back to the Falcons after five plays. Atlanta was no better as they ran four plays and only 18 seconds off the clock after committing three penalties. Shayne Graham did knock in the 54-yard field goal to go up by seven. 20-13 Atlanta with just 1:30 left.

I could feel this game going into overtime despite Atlanta playing their freaking hearts out.

That wouldn’t be the case, though. After a big pickup on first down, Cam was stripped by Vic Beasley on second down. Adrian Clayborn recovered the ball, smearing the 14-0 record of the Panthers.

The end of perfection….to the thunderous applause of Cam haters. I’m back on that bandwagon of hate BTW.

– This game was about the Falcons’ pride and about player evaluation for 2016. Many of these guys in the red and black won’t be around for next year as the roster gets shaken up after such a rough stretch from week five forward. But these grown men have pride, despite what many fans say about professional football players. Yes, they get paid, but they still have a desire inside them to win and getting embarrassed 38-0 just fourteen days ago wasn’t easy to swallow for this Dan Quinn led team.

–  Carolina has looked shaky the past two weeks. If they play in the same fashion if and when they meet Seattle or Arizona, they will get beat by ten or more.

– Julio Jones showed what could have been this season. He is just better than any defender in the NFL and if Kyle Shanahan can’t figure out how to get him the ball deep or in the red zone then he can be replaced. Shanahan, not Julio obviously.

– His 70-yard manhood ripping TD was what swung momentum to the Falcons’ side. You could feel the confidence oozing into every other Falcons player after that play.

– Jones finished the game with nine catches for 178 yards and that all important score. He would need an incredible 16 receptions next week to tie the all-time catch record for a single season set by Marvin Harrison in 2002.

Julio Jones has taken ownership of the second half today, even when covered by Josh Norman. Falcons lead, 14-10, with 12:18 left.

NOT FAIR. Julio Jones goes up and over Luke Kuechly for a 70-yard TD https://t.co/s5tkL9yFUN pic.twitter.com/IRUqpTwMEX