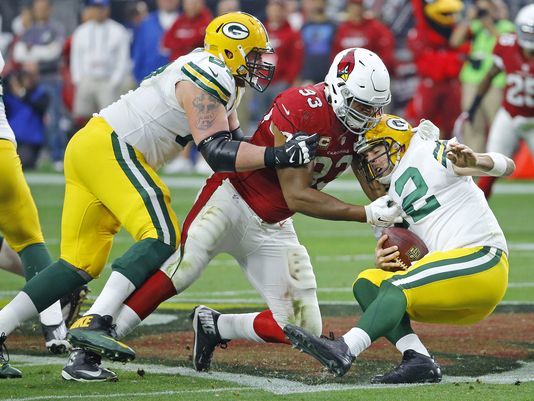 Another week, another dominant victory by the Arizona Cardinals. The Green Bay Packers were this Sunday’s victim, falling flat on their faces in the presence of the Birds, losing 38-8.

Like it or not, Carson Palmer and company are red hot, and it couldn’t have come at a better time with the playoffs right around the corner. At 13-2, Arizona has now clinched the NFC West, a first-round bye, and could potentially seal home field throughout the postseason with one more Carolina Panthers loss.

Sure, the Packers aren’t what they used to be, but to absolutely dismantle the offense of Mike McCarthy (who resumed play-calling) without Pro Bowl cornerback Tyrann Mathieu is nothing short of impressive. Arizona’s defensive stand calls to mind that of the Denver Broncos back when the Packers were still undefeated.

The best part about this team is they won’t get full of themselves (*cough, cough* Cam Newton) and lose focus. Head coach Bruce Arians understand that’s nothing really matters till games 17, 18, 19.

“There were moments in the game, defensively, that it’s the best we’ve played, but I thought we played better in Seattle,” said Arians, always seeing room for improvement. “We still haven’t done anything, other than get a bye. You don’t get rings for byes; you only get t-shirts and hats.”

Losing Mathieu is a devastating blow, but even without him, the Cardinals are poised to run straight through the NFC to Super Bowl 50.

If you read my article on the 14-1 Carolina Panthers, you’ll understand why I don’t consider them a huge threat to this Cardinals team. The Packers, Seahawks, and Washington Redskins also fall under the “not-so-important” category. I know, the Skins are heating up, but they haven’t shown any ability to compete against playoff-caliber teams, never mind championship contenders.

That leaves the Minnesota Vikings, whom the Cardinals beat 23-20 in Week 14. If anyone is poised for an upset, it’s Adrian Peterson and crew. If the Vikes top the Packers next weekend, it’s unlikely they’ll meet anyways.

I don’t normally like to pick sides, but…just kidding, I always pick sides. I’m predicting a Cardinals Super Bowl. Whom they play and whether or not they win, however, is a story for another day.