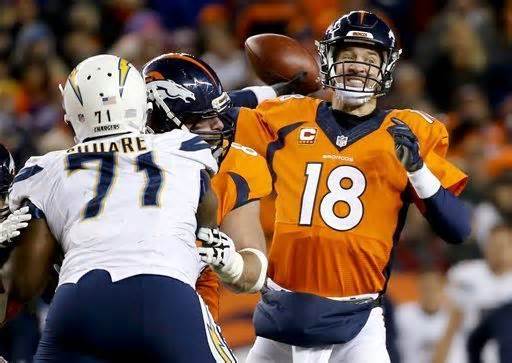 Peyton Manning is getting a lot of credit despite not producing much in the air once he relieved Brock Osweiler in this game that ended up giving Denver the AFC home field advantage in the postseason.

Manning himself acknowledged how little he did, but emotion could have played a role as he entered the game with his team fighting through three turnovers by Osweiler to that point.

The Denver defense was the key at the end as they held off Philip Rivers who had the ball with under five minutes to play and down just seven.

Eye-popping stat: 210 rushing yards by Denver, which bailed out the QB situation.

The Phins got a win that cost New England playoff homesteading as they battered Tom Brady in a ten point victory.

One explanation for this inexplicable loss by New England is the fact that they were trying to protect Brady in order to have any shot in the postseason. They can win on the road if need be, but without Brady we know what would happen.

Edelman sat out again this week, but he should be ready to re-enter the lineup once the playoffs start for the Pats in two weeks.

Eye-popping stat: Steven Jackson is not the answer at running back with 35 yards on 14 carries.

Incredibly, Rex Ryan had the same effect on the Jets playoff hopes as when he was still coaching NY, namely causing the Jets to miss the postseason.

Revenge games are overplayed in the NFL. The Bills were just the better team in this game that saw Ryan Fitzpatrick fall apart in the fourth quarter, throwing three interceptions.

Sammy Watkins sunk Revis Island with 11 catches for 136 yards, signifying Revis may not be able to shut down the youngest, fastest receivers going forward.

Even with three turnover gifts to the Browns, Cleveland could only turn those freebies into three points. Austin Davis v. Ben Roethlisberger was just too much to overcome.

Antonio Brown was busy tying Julio Jones for catches on the year while Johnny Manziel was missing medical appointments for his concussion, a great contrast of these two clubs’ fortunes.

Pittsburgh slid into the 6th seed in the AFC as the Jets lost. They will travel to Cincinnati next week, and it will be Big Ben with the QB advantage again as the Steelers face AJ McCarron most likely at QB.

The Steelers have the best passing game in the playoffs, but they may need every bit of it if DeAngelo Williams is unable to go next week with an injured ankle.

The Browns have fired everyone with a pulse as look to rebuild again. The new head coach will be number five since 2009. Not the blueprint for a dynasty. If only they had a young Bill Belichick ….wait.

There was no let down by Carolina in the final week after two rough games the past couple weeks. They hammered Tampa by four touchdowns on their way to 15-1.

The Panthers wrapped up the number one seed in the playoffs for the first time in their 20 year history and will get two weeks prep for their first playoff game.

The Bucs look to be set at quarterback with Jameis Winston having a great rookie campaign with no off the field issues as he threw the ball for over 4,000 yards.

Cam Newton is assured the MVP with four more TDs to make his total 45 on the year (10 on foot). No one is saying the Panthers are the most dangerous team in the playoffs, but it’s hard to argue with their record and dominance on both sides of the ball.

Eye-popping stat: Panthers defense with most takeaways in NFL.

This one was over at the half with Seattle crushing the Cards 30-6.

Arizona conceded the loss since it was obvious Carolina was about to win over Tampa. Still, the Cardinals may not be able to shake the shellacking that they received while Palmer was still in this game should these two teams meet again in the postseason.

Russell Wilson continued his brilliance with three more touchdown throws making it a 24-1 TD to INT ratio in the past seven weeks. Simply amazing heading into the tournament.

Seattle is the hottest team heading into the playoffs even with KC on a ten game roll.

The Jaguars were not even effective on offense this week as their players packed for vacation. The Texans defense had something to do with the mere six points by Jacksonville as well.

JJ Watt was much more effective with his cast gone as he wrapped up the sack title once again and may be the defensive player of the year for the third time, which would tie Lawrence Taylor.

Eye-popping stat: 2 INTs by Bortles with no TDs to offset them.

The Chiefs held off Oakland to keep their ten game winning streak alive. Regular season win streaks don’t mean much in the postseason, but it’s hard to ignore how the Chiefs have won close games without their best players over the course of those ten weeks.

Alex Smith did more damage rushing the ball than he did throwing, as he pierced the Raiders defense for 61 yards on just nine carries.

It remains to be seen if Justin Houston will return next week for KC.

As for Oakland, they had a chance in the fourth quarter just like in many of their previous losses this season. They just fell short with neither the run game nor Amari Cooper producing much for the offense.

Cincinnati got to 12 wins after they held off a game Ravens team that had knocked off Pittsburgh a week earlier.

AJ McCarron did his job by protecting the football while throwing two touchdowns. Cinci will be the three seed in the AFC playoffs as they host Pittsburgh, who may be without DeAngelo Williams due to injury.

Matt Stafford looked like the new and improved version that Jim Bob Cooter has crafted. The Lions got win number seven on the season with Stafford throwing three touchdowns and zero picks.

Jay Cutler was on the opposite side of things with three interceptions that kept his offense from keeping pace with Detroit.

The Lions won their last six of eight and if not for a bad facemask call on TNF against Green Bay it would have been seven wins.

Eye-popping stat: 1-7 to start the year was Detroit’s record until some firings righted the ship.

In a game that Washington didn’t need for any playoff help, they still tore the Cowboys apart, jumping to a 24-0 lead.

Kirk Cousins filleted the Cowboy defense with three touchdowns before he exited the game to rest up for the tournament.

Cousins finishes the year with 34 touchdowns total on the year and gets set to play Green Bay at home next week.

Eye-popping stat: 3 TD throws in under 2 quarters for Cousins.

The Colts were eliminated from the playoffs officially despite them beating the doormat that Tennessee has become without Mariota in the lineup to give them a puncher’s chance.

Good riddance to the Colts. I would prefer the Brian Hoyer led Texans in a playoff game as opposed to the uninspiring play of Indy. JJ Watt will be entertaining along with DeAndre Hopkins even if the Texans can’t win in round one.

DeMarco Murray had a decent game without his mortal enemy Chip Kelly in the way. He went for 5.8 yards per carry and scored a touchdown in this meaningless game.

It’s unclear who will be coaching either of these teams next year with Kelly already gone from Philly and Tom Coughlin on shaky ground in NY.

The Rams finished their usual 7 win season by dropping the last game to lowly San Francisco.

Blaine Gabbert outdueled Case Keenum by 150 yards in the air to be the difference in the game.

Fisher will remain no matter where the Rams play next year while San Fran fired Jim Tomsula after just one year.

Eye-popping stat: 354 passing yards for Gabbert, who has turned into a real option at QB for his team in 2016.

Daily fantasy carnage: Gabbert was the best bet in this one.

It was a nice story for Minnesota to finally win a division title over Green Bay who had been king of the AFC North for the past four seasons.

The victory rings a bit hollow with the result being Minnesota hosting Seattle next week in the playoffs.

The Vikings got this win by jumping to a 20-3 lead and stopping Aaron Rodgers with an interception on his second to last drive and turning him over on downs on his last drive.

The Vikes defense gets the credit with Bridgewater throwing for just 99 yards and AP gaining only 67 yards on the ground.