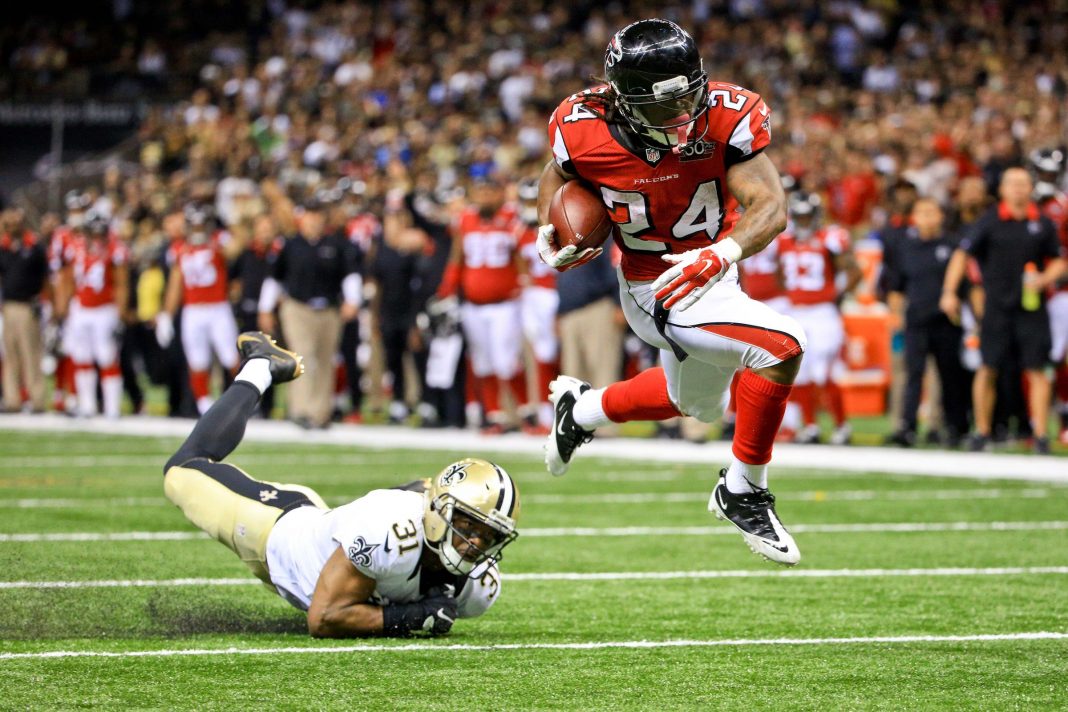 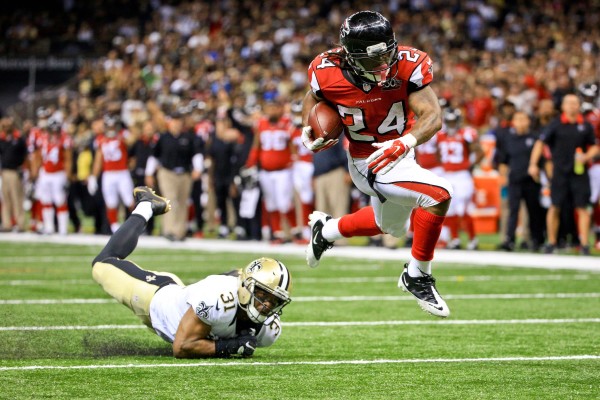 It was a fitting but hard to watch the end to a rough season for the Atlanta Falcons as they fell at home to the New Orleans Saints. Matt Ryan was the usual suspect once again as he threw the late interception that set up the division rival for the winning field goal as time ran out in this game and the 2015 season for both clubs.

Atlanta ends up 8-8 while New Orleans finishes 7-9. No playoffs for either team.

Ryan had two passes on Atlanta’s first drive that would have been touchdowns had he not overthrown Julio Jones and Jacob Tamme. They ended up settling for a field goal as the drive petered out even though Freeman was chewing up chunks of yards early. 3-0 Birds.

Freeman went over 1,000 yards rushing for the year and had 81 in this game.

The Saints wasted no time answering on their second drive of the day as they marched down for a touchdown with Tim Hightower doing the honors twice after one TD run was called back for holding. 7-3 Saints in a game that could end up being the last for both Sean Payton and Drew Brees in the black and gold.

The tight ends played a big part for the ATL in this game with Ryan using each of his three tight ends. Moeaki caught a 42-yard pass for a score as he crushed a defender upon entering the end zone giving Atlanta the lead at 10-7.

Ben Watson killed the Falcons in the year’s first contest between these two teams. He hurt them again on Sunday with a highlight reel TD catch to rip the lead back from the home team. Brees was 7-10 on that drive and continuously kept the chains moving on third down all day long. 14-10  Saints.

Julio was quiet up to this point and even had a drop on the next drive. Jacob Tamme stayed in the mix with a big 32-yard catch though that helped lead to a FG try that was ultimately blocked.

New Orleans couldn’t capitalize however as they turned the ball over on downs on a failed fourth down attempt. Robert Alford, who had a fumble recovery in this game as well, made the big tackle to give Atlanta possession once again.

At the half, the score would be 17-14 with Atlanta scoring on a Ryan pass to Devonta Freeman near the end of the second quarter. Ryan overthrew Roddy White in the middle of the drive, but White’s catch in the red zone did set up the TD.

Roddy White dropped a perfectly placed deep ball in the first drive of the second half and ended the game with just one catch for ten yards.

After Atlanta’s punt, New Orleans was able to tie the score at 17 with a 41-yard field goal from Kai Forbath.

The Falcons had a shot after a long drive. Their red zone woes continued though when Freeman fumbled the ball on the one-yard line. New Orleans took the ball 95 yards and returned the favor when Travaris Cadet coughed up the ball on the Atlanta two yard line.

The Birds had a chance at a go ahead FG but were hit with an unnecessary roughness flag that forced a punt instead.

Atlanta appeared to have the last offensive say in the outcome of this matchup as they took over with 1:42 left. That was not the case. Ryan tossed a devastating pick over the middle to Jamarca Sanford on the first play of the drive.

The Saints barely had to do anything except wait for the clock to run down then they knocked in a short field goal to beat Atlanta for the second time this year.

Jones didn’t get the 17 catches he needed to break the all time receptions record for a season, but he did have another standout game. He finished with nine catches (seven short of tying the record) on 11 targets for 149 yards. With production like that, it is on the offensive coordinator to figure out how to get him in the end zone. Clearly 17 points aren’t enough to win in the NFL consistently.

38-10 Carolina Panthers. Damn if we just had not lost that one game to the Falcons.

Ah, the romantic fantasy of a local draft choice. Not how player evaluation works. “Where is the kid from? Athens? Let’s get him before another team realizes where he played in college!”

Falcons please draft someone from Athens or sign a free agent from Athens.

Julio ended up with big numbers in catches and yardage for the season. Scoring was where he fell short and not by his own doing in my opinion.

The 2nd-most receiving yards in a season all time.

What a season for Atlanta Falcons WR Julio Jones.#builtbybama pic.twitter.com/8VNgsrVrpC