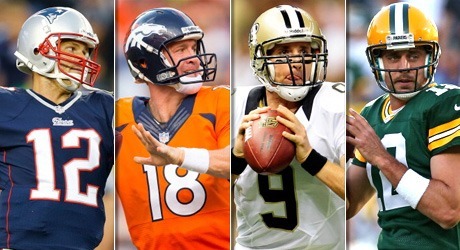 The 2014 NFL season is coming at us, and we’re still waiting to see if some of our favorite quarterbacks will be traded or staying with last year’s team. So naturally, we had to get moving on our Top 10 favorite quarterbacks for the upcoming season. We’ll also have our predictions on who will be making it to Super Bowl 2015 too.

If you have some high hopes for your NFL team this upcoming season, you had best hope to see your field general on this list. Without a top ten quarterback, it is very hard for an NFL team to make a playoff run, much less appear in a Super Bowl. That might seem obvious, but the passing game is becoming even more important with each rule passed to protect both receiver and quarterback. The guys on this list give their teams the best shot at riding on a ridiculous float through their city the week after the Super Bowl.

Sure his team got embarrassed in the Super Bowl in 2013, but Manning is super consistent. He also has tons of offensive weapons around him again.

The Packers always have a post season shot as long as Rodgers is healthy. If their running game improves again this year, that will make #12 even more dangerous.

This guy may be the hardest working young QB in the league. He knows his role and takes it as seriously as the veterans on this list. He has a great team around him of course but he is the team’s clear leader.

I fear that the golden boy’s Super Bowl chances are over, but with Brady, the Patriots always will have a puncher’s chance. It is amazing how well the team has done considering the generic receivers they have used over the past few years and the so-so defense. Brady has been the constant there.

Everyone loves Drew Brees, even opposing fans seem to give him the credit he deserves. He is not just a likable guy, he is a fiery vet that is as accurate as Peyton Manning.

Having just signed a huge new contract, Kap will need to guard against complacency. He has shown what a dangerous weapon he is both passing and also running when called upon.

The Colts leader is all he was promised to be coming out of college. As he gets more and more NFL games under his belt, the worse chance opposing teams will have against the Stanford alum.

Last year could have been an aberration as Foles lit the league on fire. But it is hard to imagine it being a fluke, the numbers he put up in 2013. Talent has to be the explanation. Either that or Chip Kelly is a true genius.

Just because the Falcons fell off the grid last season does not mean it was their franchise QB’s fault. Ryan did his job and he is a steady superstar that does not get the attention he deserves.

He may not put up the numbers of a Manning or a Brees, but the guy does lead his team to plenty of wins. Last year was disappointing for the Steelers, but they finished strong and look to be much improved in 2014.