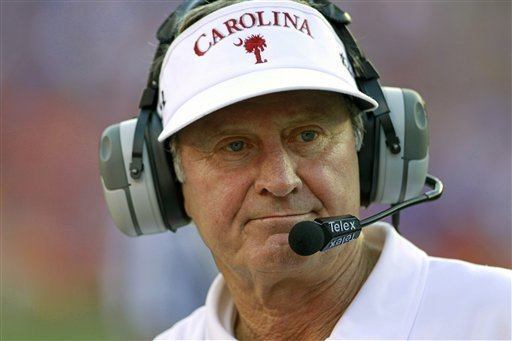 I think I like Steve Spurrier more with each passing year. He seems to be more player friendly than any big time coach that I have ever seen. He made a point of saying how he thinks underclassmen should not be talked out of going to the NFL if they have the itch to leave college early. Spurrier talked about the issue at SEC Media Days.

This is not the first time that South Carolina’s head coach has made statements that go against the status quo opinion of coaches. He said recently that he thought it was not only fair to pay players to play college sports, but that is was a great idea. You won’t hear most coaches say anything of the like, with their buttoned up attitude. These coaches have no trouble sleeping at night with their multi million dollar contracts while their roster is full of players with no cash in their pockets most of the time.

Spurrier has never been one to just go with the flow. He does his own thing with no regard to what people may think. That is refreshing in a sports world full of coach-speak and clichés. And if I were a high school player trying to make a decision on where to take my football talents, I would be drawn to a coach that really cared about the overall well being of the players. It is one thing to flatter a kid you are trying to recruit, but it is quite another to be a real proponent for the betterment of student athletes.

Was Spurrier right about his opinion? I would say so. He is right in a financial sense mainly, in that these underclassmen do deserve to make money playing in the NFL. And if they have a chance of getting drafted they have earned at least the shot to go pro whenever they choose. Will some of these guys get passed over by the NFL? Of course, but that could happen when they are seniors as well. It is also possible that some underclassmen will miss the draft, not get picked up as a free agent, and never return to school. That scenario does suck, but players know this is a possibility. They are young, but deep down they know there is no guarantee on a NFL career, no matter when they leave college.

Spurrier’s underclassman opinion also is the right advice in terms of coaches not wasting their time. If a guy has made his mind up to go pro early, then talking him into staying is a waste of time. Even if a kid can be pressured into staying an extra season, he may have mentally checked out and won’t be the player the team needs him to be. Were I coaching a football team, I would rather have a hungry player stepping into a starting role, than a guy with his mind somewhere else.

The horrific injury possibility is the biggest factor I see with this issue. No coach should want to be the man who convinced a star player to stay, only to have him get hurt and miss most of the season….not to mention destroy his draft stock. Marcus Lattimore having his knee twisted like a wet towel is something that has stuck with the Gamecock’s head coach. No one wants to see a player get injured in that fashion, no matter if they were headed for NFL riches or not. But mix in the loss of a family tree changing contract, then you can see why underclassmen should listen to the ole ball coach.