Home All News NFL Week 10 Recap: Tony Romo Back & Johnny Manziel Worth It... 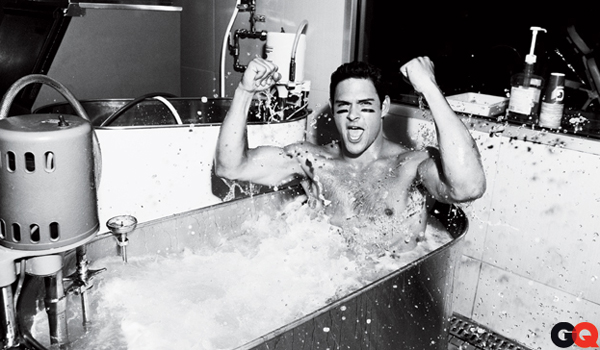 Is it just me….actually, don’t need to ask….I know it seems like the season just started and yet here we are just six weeks away from the end of the regular season. Time flies when having fun (i.e. drinking beer and watching the NFL). Once again, week ten proved a front runner can get cooled off in a hurry. I am looking right at you Steelers fan. It also proved that I will never win a dime on FanDuel.com. I am looking right at you Ben Roethlisberger! Thanks for that pitiful performance over the one-win Jets. Make that two wins now.

Johnny Manziel was clearly the right man for the Cleveland Browns to take to help at the quarterback spot. J-football has not been a factor for the Browns on the field. But it is possible he lit a fire under Brian Hoyer, who has been steady as a rock for the 6-3 Browns. The team got to the six-win mark with a victory over the Cincinnati Bengals in Cincy this past Sunday, 24-3. The words “postseason” are now being used in regards to the historically maligned franchise. There are some suspect opponents coming up too so that will help the Cleveland cause.

Kansas City kept their solid pace going in a win over Buffalo 17-13. The Chiefs don’t stand out in any one area, but they are getting wins based on their all-around play. Alex Smith is not the fantasy QB of your dreams, but he gets wins, and that is all that matters when it comes down to it. In the playoffs, a team will have to contend with a powerful rushing game from the Chiefs. K.C. will have to make sure they don’t get behind in a game where that running attack won’t help. Playoff talk may be starting too early. My bad.

Megatron made his return to the lineup as Detroit got by a game Miami team. The Dolphins would have folded by this point in prior seasons, but they are hanging around at 5-4. The Lions got a score from CJ in his return and seven catches for 113 yards. Matt Stafford has learned to spread the ball around and now that he has his favorite Decepticon back, the Lions are looking to dominate the NFC down the stretch. Detroit over Miami in this one 20-16.

Dallas got back on track with a win over the helpless Jaguars 31-17. Tony Romo came back from a back injury that cost him a game last week and his team a loss. The Jags could have been beaten without Romo most likely, with a heavy dosage of DeMarco Murray, but the Boys were not taking that chance. They are now at 7-3 after the win in London. Hopefully, England will not wage another war with us after getting sent Jag games every year now.

San Francisco kept their hope alive with an overtime win in New Orleans 27-24. The game should have ended in regulation as Jimmy Graham caught a Drew Brees hail mary as time ran out. But the bull of a tight end was flagged for OPI (offensive pass interference). Sure he put his hands on the defender and the little corner ended up on the turf. But the acting job was more the issue than the actual push from Graham. The Saints still have slim playoff hopes in the NFC South; that is if the Commish doesn’t go NASCAR and make a rule change mid-season to ban that division from wasting playoff time this year.

The Steelers didn’t take long to topple off their Big Ben high of the past two weeks. After throwing 12 touchdowns in that time period, the Steelers QB went dormant against the lowly Jets. He manged one TD throw in this game. Mike Vick, on the other hand, played really well for NY and may end up messing up the Jets’ chance at the #1 pick in the 2015 draft. Jets 20, Pittsburgh 13.

The good news for Arizona is that they got the win over the Rams 31-14 thanks to a 21 point fourth quarter. The awful news came as the team learned that Carson Palmer tore his ACL and will not be a part of their possible playoff run. The starting quarterback for the Cardinals had just signed a contract extension with the team days earlier also. That is a huge blow to the team that is as good as any in the league at the moment. How they will fare with Drew Stanton at the QB1 spot is up in the air. He has played well, but the post season is a different animal, and he will be under the microscope then. It will also be a chance to show the rest of the league his value. A few backups have earned big contracts in the past by filling in at the right times and playing well.

The Seahawks got a win versus the Giants and are now 6-3. Their 38-17 win came with a big day from Marshawn Lynch, who had a monster fantasy performance. The beast scored four touchdowns and made the Giant defense look dumbstruck in the latter half of this game.

Aaron Rodgers showed up Big Ben by tossing six touchdowns in only one half! The Packers QB is the unquestioned best passer in football, period. The Pack laid waste to the Bears 55-14. Chicago has all but quit….check that, they just announced their official quittage via twitter. “We quit”, was the team’s statement.

Philly rode the hot play of one Mark Sanchez to a win over Carolina 45-21. This game was over at halftime in all honesty. The Panthers are struggling mightily and the rest of this year will not be pleasant. Look for Cam Newton to go emo any day now. I am not confident in the Eagles‘ ability to go all the way to a Super Bowl with Sanchez, or Foles for that matter. But this team keeps on winning each and every week. Chip Kelly has his team flying under the radar at 7-2. They are not getting nearly the credit given to other teams with similar win-loss columns.