Home All News THE WALKING DEAD Self Help Recap: Eugene Likes to Watch 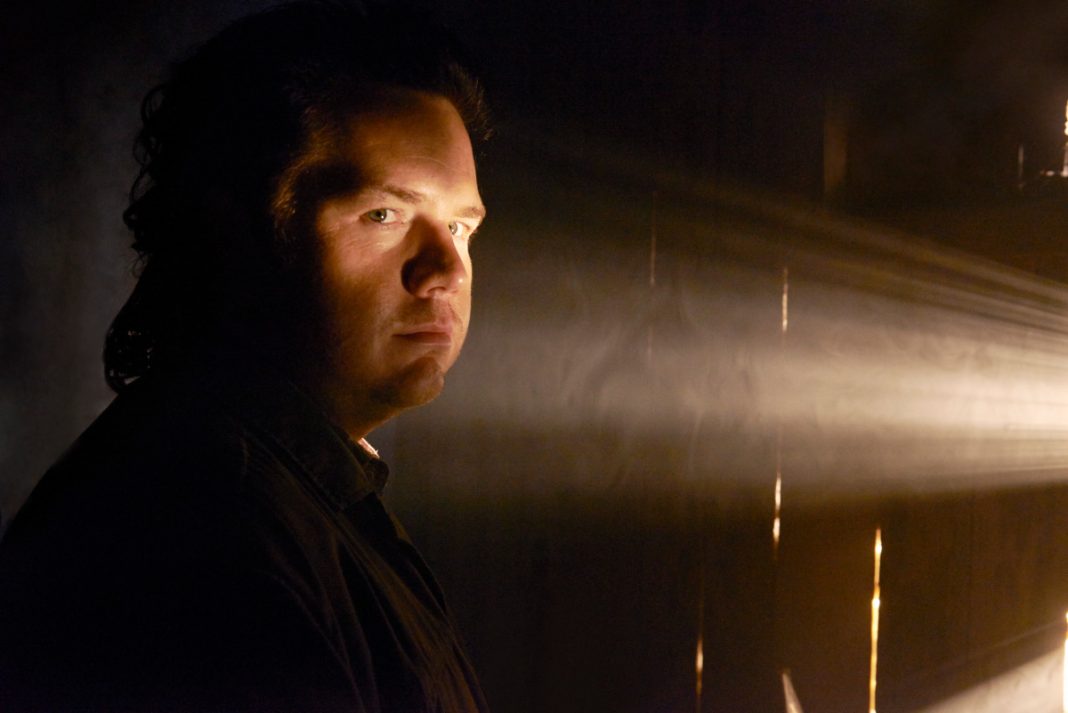 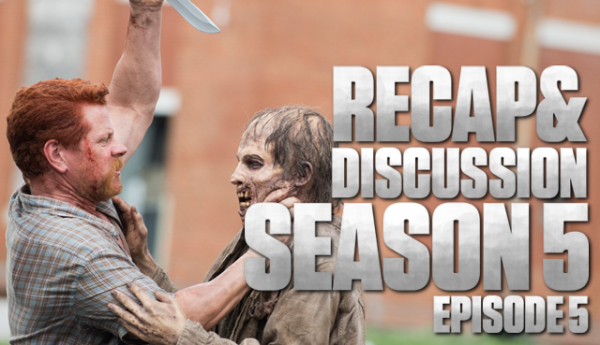 Our zombie adventure starts out this week with the short bus rolling toward Washington D.C. We see Rosita stroking Abraham’s fire red hair and the payoff from that comes later in a dark library. Then the camera turns to the gloom and doom face of Eugene. He is apparently depressed and can’t hide his pitifulness as the bus crew makes its way down the highway.

Maggie and Glenn show a ton of faith in Eugene’s ability to fix all the problems of the current world they inhabit. They are asking the alleged genius scientist how long it will take him to solve the zombie issue. They make it sound like he is going to be fixing the brakes at a car repair shop and they want to know how long they will have to wait. It would seem to me that getting rid of millions of walkers would take some time, like a few months minimum. These are undead humans walking around trying to eat what is left of the normal people. This is not going to be fixed overnight, if at all. This little scene made me question Maggie’s and Glenn’s intelligence. 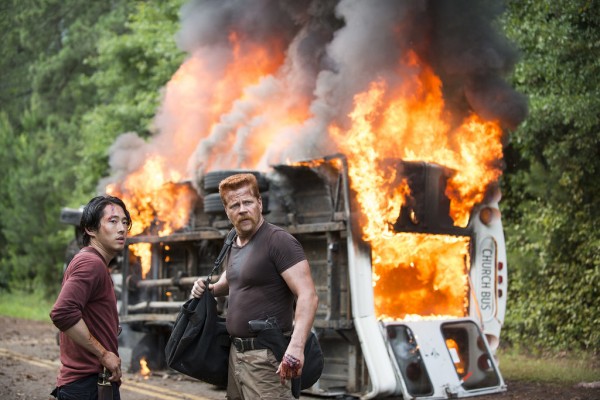 As it normally turns out on “The Walking Dead“, you can’t have an uneventful car ride. Sure enough Abraham inexplicably loses control of the short bus and manages to flip it on its side. Not shockingly the bus is then semi surrounded by walkers, but the crew manages to exit the bus wielding knives to fight off the unfortunate undead traveling the road. Eugene is shown to be a true coward as he is scared to breathe much less move. Tara forces him to get out of the bus that is just a tiny bit ablaze. Eugene finally musters up the courage to get off the bus but has a hard time fighting the walkers. He does manage a half hearted stab to the back of the neck of a walker who had a hold of Tara. It is amazing Eugene lived through the world pre zombie apocalypse, much less the dangerous environment he is navigating now. I am shocked he wasn’t killed in a stapler accident at his lab back in the day.

In this episode we get a few flashbacks of Abraham and they are none too pleasant. Smashing in the head of a guy with a can of beans at a wrecked out grocery store is not a good look for the red headed leader of the present time bus gang. He was doing what he had to do at the time I assume, but the brutality is in question. It is so shocking that his wife and kids are afraid of him after seeing what he has done on the meat isle. It is becoming more apparent how unstable Abraham actually is as well. He flies off the handle easily and is not in full control of himself as a leader needs to be. Oh, and the bloody hand is a theme throughout this episode. Was big Abe bitten or scratched by a walker or not?

Once the group finds some sanctuary at a library they set up camp with book shelf dividers for rooms and even do some cooking on top of a trash can with coat hangers. Pretty smart. Again we see Glenn talking about the new world they are going to bring about when they get to D.C. Glenn has his rose colored glasses strapped on tight. And maybe that is the hope he needs to keep going forward with this mission. But it seems he is too confident in the cowardly doctor they are in charge of getting to a lab to solve humanity’s greatest problem ever.

In the library it is revealed by Eugene to Tara that he sabotaged the bus with some glass in the fuel line. Apparently the guy is insane because his reasoning made no sense to me. He was afraid so he made sure the bus got jacked up out on the road amongst walkers and who knows what else? A logical scientist would not plan such a fool hearty incident. Not to mention old Eugene is outed as a peeping Tom as he stares at Abraham and Rosita getting intimate. The guy looked like a Saint Bernard, with a mullet, gazing at humans having sex. Pretty disturbing, but no one seems too shocked at his odd behavior. 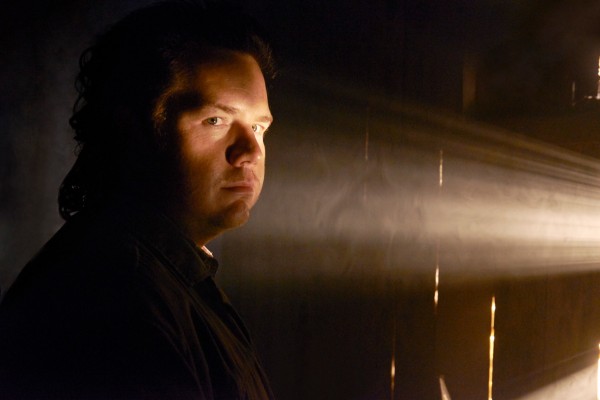 More flashbacks ensue as we learn that Abraham’s wife ran away with their kids since they are terrified of the man he has become in the grocery store massacre. He is left with a note and no more.

When the group decides to keep heading north, they have to round up a new vehicle. They find a fire truck that will do, so they mount up. I get a bad feeling from the start as I assumed the siren would get stuck blaring away and drawing in every dead-head within five miles. But the truck cranks up then sputters out as it creeps forward, allowing a building full of the town’s walkers to pile out toward the group. It is a nasty scene and looks bad until Dr. Eugene pulls out the fire truck hose from atop the vehicle and destroys all the walkers with the powerful water flow. This scene was a good concept but it didn’t come off right to me. The water was not strong enough from what I saw to just rip the zombies apart. If the walkers were that frail they would be much easier to kill by hand. 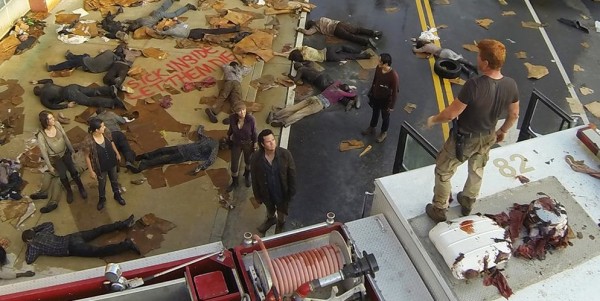 After the gang gets the fire truck on the road, they end up at a long stretch of highway where they stop to smell the stench. They walk over the hill to see a pile of zombies about two miles ahead blocking their path. When I say a pile, I mean a horde the size of which overran Hershel’s farm way back when. Crazy Abe insists on going through, but the group finally bucks him, even his lover Rosita. The big man won’t hear it and insists on moving forward, a theme throughout this episode. There is a scuffle and I thought, actually wished, Eugene was going to get accidentally shot as a gun barrel was waved by his giant head.

To stop the fight, Eugene breaks down and confesses he is a liar and a coward. The coward we already knew about and I had guessed for a while that he was no scientist. Not hard to guess by the way. He admits he knows nothing about curing the world’s zombie virus and that pisses Abe right off. After recounting all the people who died trying to protect him, Eugene the fraud is struck with a few haymakers from Abraham. The liar then drops face first on the pavement with a nasty thud. That big brain full of facts, figures, and video game stats may be forever scrambled after that fall.

At the end of the episode we see the start of Eugene’s lie in another flashback. Abraham is about to off himself, pistol in mouth, because he sees the remains of his family in a ghastly fashion. Then the mulletted one calls for help as he is chased by three walkers. Abe has to stop his suicide attempt to save Eugene. That is when the terrible lie began. However, it gave Abraham hope to keep moving forward to help Eugene get to Washington. Eugene did what he thought necessary to get help from Abraham. It kept both of them alive. How much longer, I am not sure. 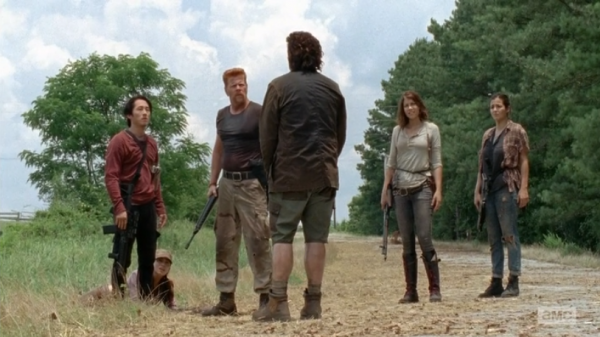