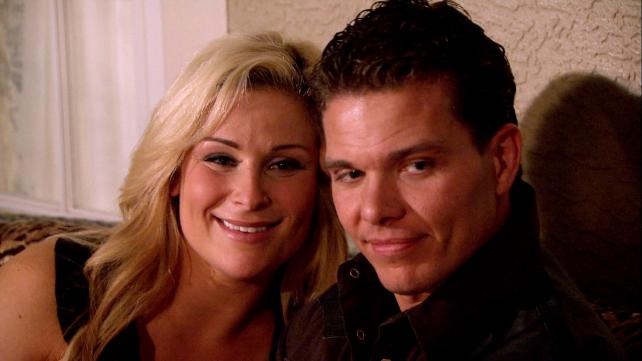 On this week’s episode of Total Divas we continue to see what a monumentally huge asshole TJ is to his wife Natalya. The show opens with just about everyone asking her what is up with her and TJ. This is after the two of them got into quite an argument on last week’s show that many people backstage witnessed.

A year into their marriage TJ and Natalya may already be headed down the road to a divorce. It’s not too often I root for a couple to break up but I am the biggest cheerleader for getting Natalya away from TJ ASAP. He seems to have no respect for, desire for or interest in his own wife unless he is berating her in front of the cameras. Why she has yet to clock him for treating her this way, especially when they know they are being filmed for a reality show.

Though Natalya doesn’t strike me as the most sentimental person ever, you know the problems in her marriage are getting to her when she pours her heart out to the camera that will broadcast her heartbreak for the world to see.

To give you a smidgen of an idea of what a jackass TJ is, notice that in this episode Natalya pulls Eva Marie aside and tells her that, though TJ is pumped about attending her and Jonathan’s wedding, Natalya doesn’t want to cause drama at the wedding so her plan is to beg Eva Marie to seat TJ away from her during the nuptials and reception. That pretty much says it all right there, so I am done with the topic of what a sleezeball TJ is (for this week, at least. Don’t think we won’t go into this again during the next recap though.) What shocked me more than Natalya’s request was Eva Marie’s response to it, which was basically, “you’re a big girl. Suck it up and sit with your own husband.” Which, if you ask me, is pretty harsh. But then again I have never been a fan of Eva Marie anyway…

In happier relationship news Eva Marie is busy preparing for said upcoming wedding. This week’s episode shows her and fiancé Jonathan shopping for her wedding dress and his tuxedo. It also brings viewers into the gym to see Eva Marie working out for her upcoming cover shoot for the women’s version of Muscle & Fit Magazine.

After watching him in the ring every week I have to say it is shocking and a little jarring to see John Cena of all people dealing with laundry (though I highly suspect once the camera stops rolling the maid steps in and takes over.) When he holds a pair of Nikki’s G-string panties in his hand they look like they were made for a Barbie doll.

Poor Nikki and Brie are seen walking into an L.A. restaurant with Daniel Bryan and an excited fan runs up to them and asks them to say something to her friend on the phone. Though Nikki and Brie happily complied I wouldn’t be surprised if they only did so because the cameras were rolling. I met Nikki and Brie at a convention folks, and I have to tell you in real life they are a bit standoffish. So don’t believe everything you see on TV.

Once the girls made it into the restaurant Nikki, sitting right across from sister Brie and BIL Daniel Bryan stubbornly declared that (for this week anyway) she is content in her relationship with John Cena and she is starting to be OK with the idea of them never getting married. Of course, viewers who have tuned into Total Divas from the beginning will know that the couple already previously broke up because she wants to get married and have kids and he doesn’t. In a sidebar during this scene Brie stated that she knows her sister better than anyone and that Nikki is covering up the pain of knowing the man she loves doesn’t want what she wants.

In the next scene Brie and Brian are out with Brie’s parents and sisters, discussing the fact that they all know Nikki wants to get married and have kids but is stubbornly clinging to someone who has declared (more than once by the way) that he doesn’t want to.

This week’s show actually concludes Eva Marie and Jonathan’s outdoor wedding in Sonoma Valley. Eva Marie ditched her bizarre shade of hair that looks like she achieved it using red Kool- aid to her natural hair color of dark brown. If I had turned this episode on towards the end I would not have known who I was looking at. This stunning beauty of a woman does not need to be pouring a pitcher of Kool- aid over her head in order to be the picture perfect image of a woman.

During the after ceremony footage we see Brie and Nikki once again discussing the idea of marriage and that Nikki wants it. Brie states that she knows her sister feels defeated and she wants to talk to John about the future of his relationship with Nikki.

Poor Natalya is finally willing to admit in this point of this week’s episode that her marriage is falling apart and she needs to do something about it. As we sit there wondering what exactly she’s going to do we enter the final scene of the episode to see not only Brie, but her mom and brother meeting at a restaurant where they intend to have a discussion with John about Nikki John stuck to his guns and stated that from the first date they went on she knew he wasn’t interested in marriage or kids with anyone. Nikki’s brother pressures John to break up with Nikki so she can find someone else.

I don’t know about anyone else, but I will be counting down the days to the next episode of Total Divas.