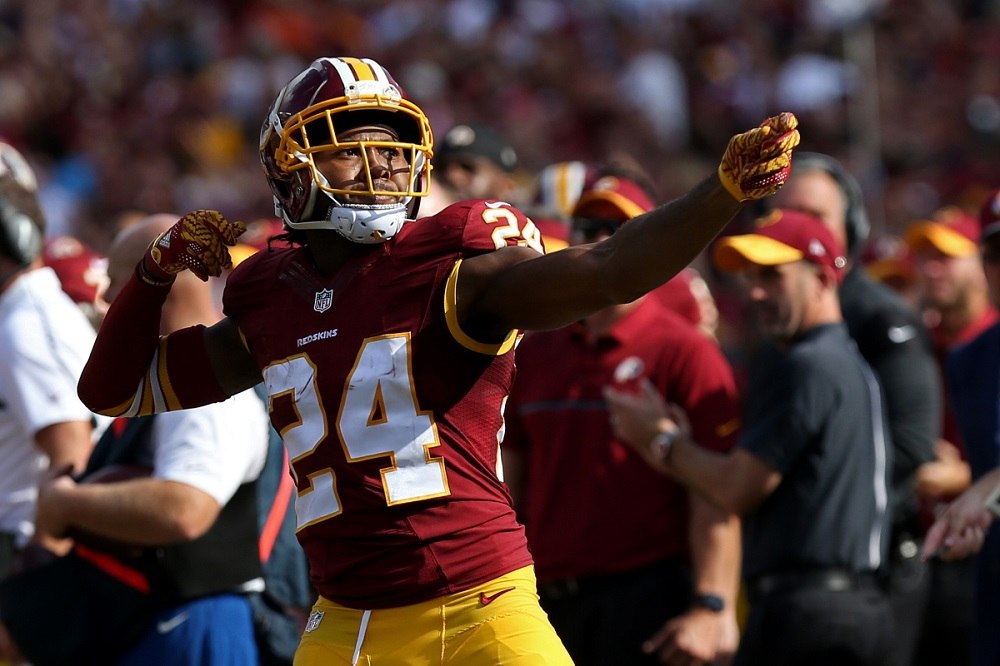 Washington’s Josh Norman is no stranger to NFL fines. His altercation with Odell Beckham Jr. last year cost him a few bucks. And this year, his bow and arrow act on the field after a big play has gotten him fined as well.

Now his week Norman is contemplating a celebration involving a beer keg, according to his interview with USA Today.

“I’ll say this,” Norman said in the Washington locker room after practice on Thursday, when asked for a hint. “Since they sell beer on TV while kids are watching it, I’m thinking I might open a keg on the field, and I’m going to drink it on the field. And I don’t see that being on the rule book.”

Norman is trying to show the hypocrisy of Roger Goodell and the League. Clearly, imposing fines for fun expressions by the players makes no sense when contrasted with zany beer commercials designed to entertain fans who love the game of football.

What Josh Norman doesn’t get is the fact that the powers that be in the NFL don’t really have an issue with specific celebrations. The Redskins cornerback is not going to beat the system by finding celebration loopholes.

What the all powerful League is interested in is not eliminating fun. League officials just want to make sure their authority is not questioned.

Killing creativity on the field is just a side product of that mission.

There was nothing wrong with Norman’s little bow and arrow skit. It was kinda cool and didn’t hurt anyone. And I doubt anyone could have been offended by it.

But Roger Goodell and his cronies don’t want players getting the idea they can do whatever they want to in between plays. Let Norman get away with his drama production and next thing you know Odell Beckham will be setting field goal practice nets on fire.

Or did that happen already? I’ve lost track with ODB’s antics this year.

The bottom line is that NFL wants no part of players breaking away from the pack. That could give individual players more power than the League is comfortable with. Pretty soon a superstar cornerback with a big following can stop playing football after five years, and make living off his celebrity if he is allowed to market himself too much every Sunday.

That’s what the League wants from the workers on the field. The NFL will coordinate the entertainment with ridiculous state lottery showcases during Falcons’ halftimes and terrible Super Bowl concerts that have zero business interrupting a football game.

I hope Josh Norman does tap a keg on Sunday against the Lions. I like seeing the pot stirred on the gridiron. Anything to ruffle the feathers of the Commish. Norman just needs to realize he won’t change anything and won’t open anyone’s eyes to the League’s hypocrisy.

We see it already Josh, with the beer commercials and scantily clad cheerleaders (both of which I am in favor of).

The NFL isn’t stamping out celebrations in order to protect children from seeing out of control pro athletes make a mockery of a touchdown. The NFL just wants to keep a tight clamp on its workforce, just in case the players get the idea they are bigger than the Shield itself.

If Norman really wants to make some waves, he should promote a product on the field after a play. Maybe snap into a Slim Jim after a pick-six. He would see a heavy fine, but a deal with a mega-corporation that sells a ton of “mechanically separated chicken” products would be worth it.

And it would cause Roger Goodell to blow a gasket, making it even more worthwhile.