Tony Romo has been an elite quarterback over the past decade. He just hasn’t done enough to deserve “his” starting job back with the Cowboys.

That doesn’t mean that Dak Prescott is a better player than Romo. He’s not. Not yet anyway. The kid is a rookie after all.

Just like Tom Brady was not a better passer than Drew Bledsoe when he took over for the Patriots back in 2001. Brady was the better option though because he was a better fit for the team at the time.

Prescott’s poor play against the Eagles last week showed his flaws. He redeemed himself in overtime of course, and the Cowboys moved on to a 6-1 record. And he has the team looking like the second best club in the NFL.

Winning is what’s important in Dallas. Not individual stats. Romo has piled up enough impressive passing stats to make him worthy of getting back to QB1 status. But what has he done in the big picture to make anyone think the end result of this season would be any different than in previous years?

Romo is 2-4 in the postseason. Prescott is 0-0. So, while the rookie is an unknown when it comes to getting the Cowboys to the next level, Romo is not. Jerry Jones knows what he will get with the veteran QB.

So does Jason Garrett. His legacy is firmly attached to Romo at this point. And it remains to be seen if he has the stones to detach himself from Romo to test the playoff waters with his new QB1. 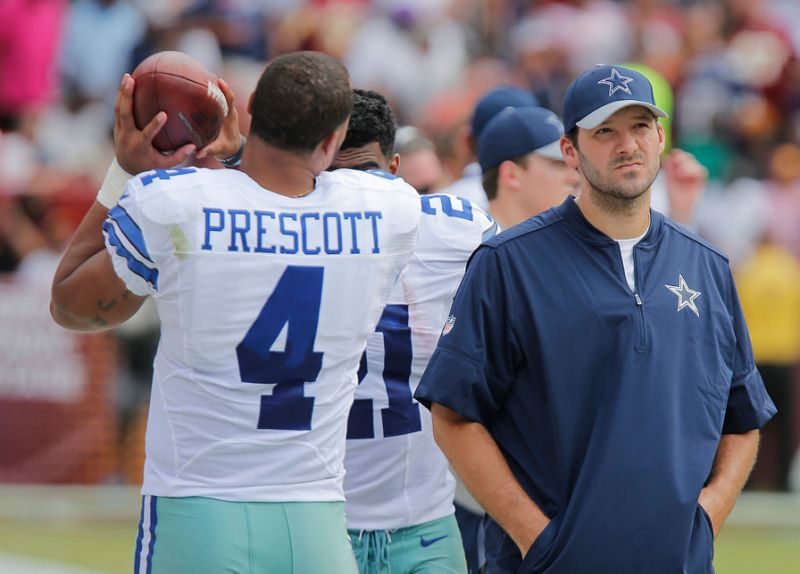 Bill Belichick did take a chance back in the day. Long before the Patriots were NFL royalty. Rolling the dice paid off for Belichick and his franchise. Having the courage to change up the most important position on the field made New England into what they are today.

Of course, there’s a stark difference between how the Pats run their team and how the rest of the League does things. Even the Cowboys can’t say they are on the same level, despite still being one of the most popular teams in the NFL.

Jerry Jones sees himself as a maverick. A real trailblazer in pro football. Yet, if he sits by and lets Tony Romo become his starter again, Jones is a coward.

The Texas oil man has never shied away from controversy or interfering with on the field operations. So that shouldn’t stop him, should Garrett need a nudge in the right direction.

Nor should some sort of nostalgia for Tony Romo and the good ole’ days.

The good ole’ days don’t involve Romo. Those belong to Aikman, Emmitt, Irvin and other Dallas teams of the 1970s.

Romo has been a good regular season quarterback. He can hold his head up proudly. He’s made a lot of money and got a lot of wins for Dallas.

His time is over, however. Now is the time to see what a new leader can do for “America’s Team.”

Don’t expect Prescott to become a football god like Brady. 4 Super Bowls is a lot to ask.

But at this point, Dallas fans would take just an appearance back in the big game. Something that Tony Romo has had a decade to accomplish.

He has failed. Time to move on.