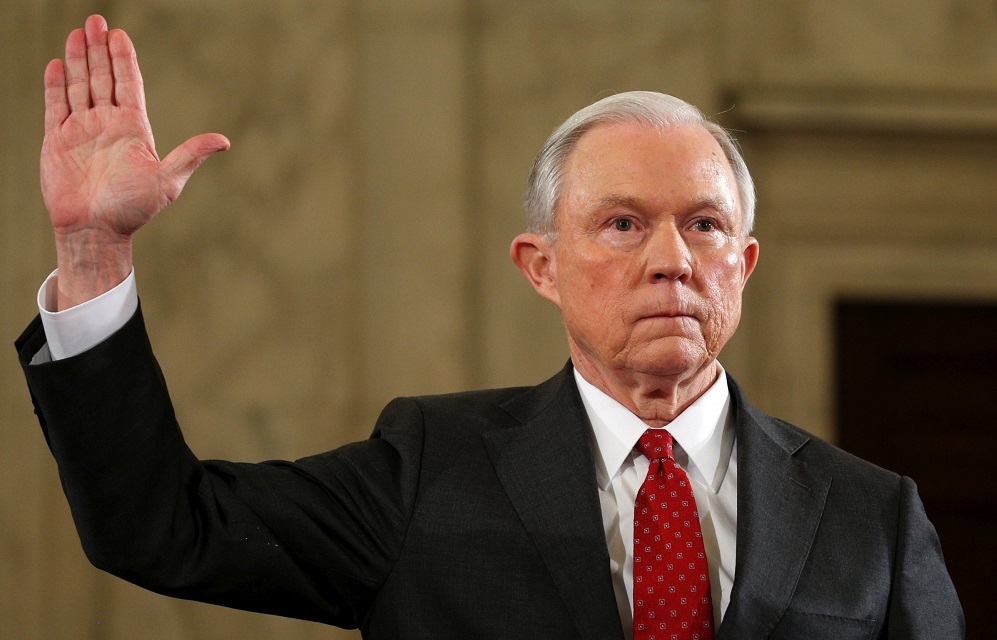 Not long after President Donald Trump was flying high from his speech to Congress Tuesday, another Russia connection story hits the White House. This time with Attorney General Jeff Sessions.

On Monday, White House press secretary Sean Spicer continued denying any Russia connections with the Trump Administration even after the controversial Wilbur Ross confirmation. Nearly every day is now bringing in yet another strand in this strange web connection between Russia, Vladimir Putin and Donald Trump.

As originally reported by The Washington Post, apparently Attorney General Jeff Sessions met twice last year with the top Russian diplomat in Washington during the presidential campaign. The diplomat’s interactions with Trump’s former national security adviser Mike Flynn led to his firing, according to the Justice Department.

During his confirmation hearings, Sessions neglected to mention either of the meetings when he said he knew of no contacts between the Russians and any Trump surrogates. A Justice official did say that Sessions didn’t mislead senators with his confirmation answers.

Russian ambassador, Sergey Kislyak, is considered to be one of Russia’s top spies and spy-recruiters in Washington by US intelligence, according to current and former senior US government officials.

Naturally, Russian officials heavily dispute this characterization of the ambassador

Jeff Sessions met with Kislyak twice in July while attending the Republican convention, and in September in his office when Sessions was a member of the Senate Armed Services committee. Sessions was an early Trump backer and regular surrogate for him as a candidate. Defenders of Session have said that he met with Kislyak while under the hat of being a Senator not while being a Trump surrogate.

That definitely is rather thin, but this has caused quite the shake up in Washington which led to Sessions responding quickly on Wednesday stating that he never discussed campaign-related issues with anyone from Russia.

“I never met with any Russian officials to discuss issues of the campaign,” he said in a statement. “I have no idea what this allegation is about. It is false.”

Kislyak’s potential proximity to Russian spying is one reason why Flynn’s interactions with him, and Flynn’s failure to disclose what he discussed with Kislyak, raised concerns among intelligence officials.

In his confirmation hearing to become attorney general, Sessions was asked about Russia, and he responded at the time that he “did not have communications with the Russians.”

Sessions’ spokeswoman Sarah Isgur Flores said there was nothing “misleading about his answer” to Congress because the Alabama Republican “was asked during the hearing about communications between Russia and the Trump campaign — not about meetings he took as a senator and a member of the Armed Services Committee.”

“Last year, the Senator had over 25 conversations with foreign ambassadors as a senior member of the Armed Services Committee, including the British, Korean, Japanese, Polish, Indian, Chinese, Canadian, Australian, German and Russian ambassadors,” Isgur Flores said in the statement.

A Justice Department official confirmed the meetings, but said Sessions met with the ambassadors “in his capacity as a senator on the Armed Serviced Committee.”

A White House official said: “This is the latest attack against the Trump Administration by partisan Democrats. (Attorney) General Sessions met with the ambassador in an official capacity as a member of the Senate Armed Services Committee, which is entirely consistent with his testimony.”

In reaction to the report, Rep. Elijah Cummings, a Maryland Democrat and the ranking member of the House Oversight Committee, also called for Sessions’ resignation.

“There is no longer any question that we need a truly independent commission” to investigate potential ties between Russia and the Trump campaign, Cummings said. “It is inconceivable that even after Michael Flynn was fired for concealing his conversations with the Russians that Attorney General Sessions would keep his own conversations for several weeks.”

Cummings called Sessions’ claim during his confirmation hearing that he did not have communications with the Russians “demonstrably false.”

Minnesota Democrat Sen. Al Franken, who asked Sessions about Russia at the confirmation hearing, said if the reports of Sessions’ contacts with Kislyak were true, then Sessions’ response was “at best misleading.”

“It’s clearer than ever now that the attorney general cannot, in good faith, oversee an investigation at the Department of Justice and the FBI of the Trump-Russia connection, and he must recuse himself immediately,” Franken said.

News of Sessions’ contacts with Kislyak came as the New York Times reported Wednesday evening that officials under former President Barack Obama had sent information throughout government about potential Russian contact with Trump’s associates and interference in the 2016 election. The officials did so, the Times reported, in order to preserve the information after Obama left office.

Regarding the Obama administration efforts, Obama’s spokesman Eric Schultz told media outlets: “This situation was serious, as is evident by President Obama’s call for a review — and as is evident by the United States response. When the (intelligence community) does that type of comprehensive review, it is standard practice that a significant amount of information would be compiled and documented.”

Cardin spokesman Sean Bartlett told media outlets that the senator had received the classified documents on request and that they were shared with both Republican and Democratic committee staffers.

Sessions did say “no” when asked in a written questionnaire by Sen. Patrick Leahy if “he had been in contact with anyone connected to any part of the Russian government about the 2016 election, either before or after election day.”

If it turns out that Sessions did have these conversations, it will put another black eye on the Donald Trump administration which is suffering many cuts and bruises already from Russia.

How the Russia claims have dogged President Donald Trump

May 2016: Reports first emerge of hackers targeting the US Democratic Party. Over the next two months, reports suggest US intelligence agencies have traced the breaches to Russian hackers.

July 2016: Jeff Sessions meets Russia’s envoy to the US Sergei Kislyak and several other ambassadors at an event on the sidelines of the Republican National Convention.

August 2016: Paul Manafort, Donald Trump’s campaign manager, quits after an FBI investigation into his alleged ties to Russian interests in Ukraine and the US.

September 2016: Senator Sessions has a private meeting in his office with Mr Kislyak. The justice department says all meetings were linked to his work on the armed services committee.

October 2016: The US intelligence community release a unanimous statement formally accusing Russia of being behind the hacking of the Democratic Party. Mr Trump questions the findings. Over the coming months, more reports on the hacking emerge. The US intelligence agencies, the justice department and four Congressional committees are all currently investigating the allegations.

February 2017: Mike Flynn resigns as Mr Trump’s new national security adviser after it emerges he discussed the potential lifting of sanctions against Russia with Mr Kislyak and then misleading Vice-President Mike Pence about the communication.