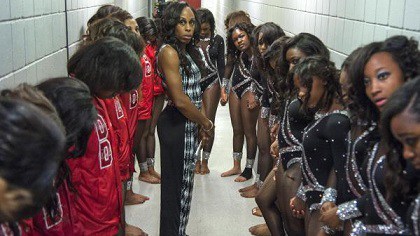 The stakes continue to rise for the Dancing Dolls on “Bring It!” and this week, they go up against one of their greatest rivals- the Prancing Tigerettes (PT) out of Memphis.

Dianna and PT’s coach Quincy, have a love-hate relationship, but there is always more shade than anything else between the two. The “Clear the Lane Competition” takes them to Goodman, Mississippi as the girls compete in creative dance with props and traditional stand battle.

Ms. Dee changes things up this week because she wants to knock Quincy and the Divas of Dance from New Orleans, out of the park. Their creative dance involves ballet, jazz, hip-hop and a life-sized snow globe. With ballet as one of the feature genres, you know what that means- Faith is up for a solo. Since she specializes in ballet, she is naturally in the running for the spot and Dana loves it.

Speaking of Dana, the other moms (not just Rittnay) have had it with her constant mentioning of how great, and beautiful and amazing her daughter is. “Scoot over because Faith is coming up quickly.”

They decide to be petty, in a fun way, and blow duck horns every time Dana says Faith’s name during practice and if you didn’t already guess, it’s a lot.

During tryouts, Faith goes up against two other girls who have studied ballet as well. While all the girls have their good points, Faith ultimately wins to Dana’s delight. Let me interject here how interesting it is that a storyline has been built around Dana and her daughter so quickly. I know that she and Dianna are childhood friends, but I wonder if there’s more to it. Not anything sinister, just something… advantageous. And that’s that on my conspiracy theory.

Dianna’s idea for the creative dance is a big one as she builds it around the snow globe. The only thing is her prop builder tells her that he can’t do it because it’s takes too much and he doesn’t have the time nor resources. That throws a major wrench in the Dancing Dolls routine because it doesn’t work without that prop. To top it all off, she doesn’t find out about it until two days before the competition, which pushes her into a semi-panic mode.

Pressed for time and mentally exhausted, she goes to the moms for ideas. There is no way that she can change the routine at this point, so she has to find a way to make it work. The moms actually come up with a feasible alternative, which seems to save the day. Well, kind of because they still have to alter the routine a bit and only have one night to do so.

The pressure gets to Dianna as she goes off on the girls and I mean, more than she usually does. Mainly because the new girls just can’t pick up the choreography and changes as quickly as the veterans.

The day of competition comes, and the girls are prepared as much as they can be. The only thing is the human size displays that have taken the place of the snow globe arrive 15 before they are to go on the floor which means they didn’t have time to practice.

The Prancing Tigerettes are in the building and gunning for the Dolls. On the floor, for their creative dance, they do a good job, but from Dianna’s view, it’s subpar to what she has seen them do in the past. “I expected more from Quincy; I’m a little disappointed.” The Dolls hit the floor next, and everything works out beautifully. I will say here, though, that Faith’s dance, for me, leaves a lot to be desired. Maybe it’s the clips the producers chose to utilize for the episode; I don’t know. Her solo just doesn’t live up to her mother’s hype.

Next up is the stand battle and DD goes against PT in the first round, which is interesting. Both teams do a good job, but the judges feel that the Dancing Dolls got the upper hand, and they go to the final round.

And let’s talk about the last round. The Dancing Dolls go against the Divas of Dance, who only has five dancers. That is a good thing and a bad thing for the Dolls. While they are a newer team meaning fewer experiences in competition, they have less room for error in their formations and lines. The Dolls are known for giving excellent performances but here lately, especially with the new dancers, they have been less on their game.

In the end, that lack of precision shows. DD comes in second place in the stand battle, and they tie with the Prancing Tigerettes in creative dance. That pisses Quincy off even more as he already felt his girls were cheated in the stand battle.

It is a good lesson for the Dolls because sometimes you can get so comfortable at the top; you have to be reminded why you deserve to be there.