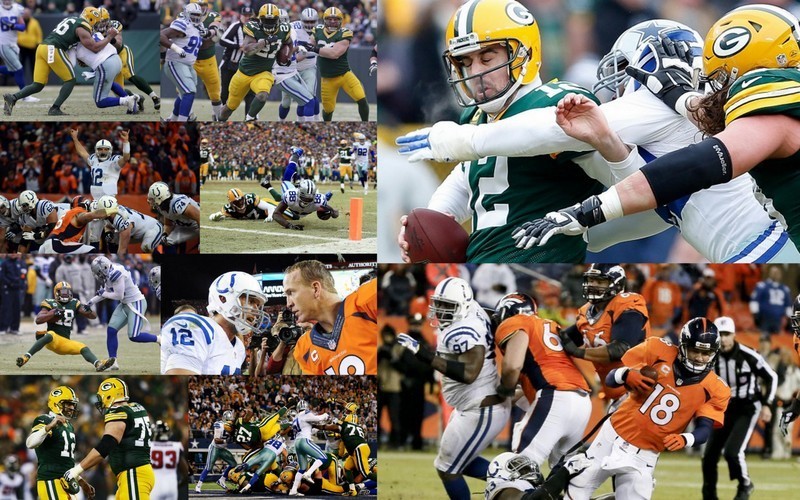 Sunday’s playoff games offered a so-called Ice Bowl II between Dallas and Green Bay. Good to know that Fox Sports has such a creative team to name these games. We also had Andrew Luck taking on the aging Peyton Manning in a battle of the old guard versus the new. I got goosebumps watching the CBS intro for this QB matchup. That vibe went away 34 seconds later as soon as Phil Simms opened his mouth.

The Packers took control of this game on their first drive. With Aaron Rodgers not looking very stable on that bum calf, the Packers still got in the end zone to go up 7-0 on the Cowboys. Tight end Andrew Quarless was the recipient of this TD pass from #12.

The Cowboys never panicked even though you don’t want to be down early in a game at Lambeau field. Dallas was determined to stay with the run and they never wavered even when they were getting only a couple yards per carry from Murray. Romo led his Boys down the field to finally score on a pass to Tyler Clutts, who could have been on a pro wrestling tour at local high school gyms before this game for all I know. This was his second reception of the entire season! 7-7 game.

Dallas took advantage of the Packers’ screw up on the snap as Rodgers got sacked and lost the ball. The Boys were set up nicely at mid field. The turnover was costly for the Packers. Romo hit Terrance Williams for a TD strike reminiscent of his big plays versus the Lions last week. 14-7 Dallas on top.

Rodgers was clearly not himself early in this game. He never offered to scramble and really that was to his credit. It would not have taken much to put him out of the game with that leg giving him such trouble. As for Dallas, their defensive line was in charge of the line of scrimmage to this point.

Dallas continued to move the ball on their next drive and Dez Bryant finally got a ball thrown his way. It has to be frustrating for these big time receivers to be shut out in major games. Jason Whitten had a nice game and found openings consistently over the middle. Romo bobbled the snap on third and one which led to a fourth down. The field goal try was no good as it was tipped by the Packers’ Datone Jones.

Green Bay got a much needed score before the half ended. Randall Cobb had a huge game and made some key catches on this drive. Rodgers threw a perfect pass to the wide out on the sideline to set up a FG just before halftime. 14-10, Dallas still up.

Dallas’ coverage must have been smothering or Rodgers wouldn’t have been 9/17 so far in the game. Green Bay punted it away and Dallas continued to force the ball to Murray, which was the right game plan. The running back did have a big fumble on this possession where he had daylight for days and would have scored. It’s truly a game of inches, as Julius Peppers just reached Murray’s arm in time to cause the fumble before the back would have headed for glory. Packers’ ball.

Eddie Lacy showed his talent as he had a 29 yard burst behind a nice fullback block. A nasty scuffle on this drive cost Green Bay a third and one, making it third and 16. That led to a FG to make it 14-13 Cowboys.

On Dallas’ next drive they got the ball to Dez for just his second catch of the day. Romo got away with a reckless throw to Whitten, but his tight end made the catch as usual. Murray stormed in to cap the drive off from a yard out. Cowboys extend the lead to 21-13. This led into another commercial for NFL mobile. Who is going to watch the Super Bowl on their cell phone? People at work? If your job requires you to work during the Super Bowl, you should dust off your resume.

Randall Cobb could have been the MVP of this game as he kept making big catches. Jordy Nelson was a non factor. Devante Adams brought the Pack to within a point on his 46 yard score from Rodgers. Adams got high praise from his QB after the game for the way he prepares each week. 21-20 Dallas.

Green Bay put the hurting on an already banged up Tony Romo. Dallas punts it away to the Packers and a heating up Rodgers. The Packers marched down the torn up field with Adams making another big catch and Cobb giving the Cowboys secondary hell. The TD came on the eighth play of the drive as Rodgers found Richard Rogers for a 13 yard strike between two defenders. 26-21 after the two point attempt was no good.

Dallas would get the ball back with about nine minutes left to play. They didn’t panic at all, sticking with the run game. Murray was smashing fools late in this one. Dez had a nice catch on a low throw from Romo. Then the Dallas QB took a big sack on a play that saw some receivers open for short gains. The drive came down to fourth and two with about four minutes left to play. With Stonehenge sized stones, Jason Garret went for the throat. He dialed up a jump ball to Dez Bryant and the call seemingly worked, as Bryant made one hell of a catch. However, the Packers challenged the call and of course the call was reversed, nullifying a brilliant effort on the part of X. Instant replay is great for every instance except receptions, where apparently you have to get off the ground with the ball, sign a statement saying you caught it, take a lie detector test, then hand the ball directly to Roger Goodell to make it legal. Packers take over possession still up 26-21.

Dallas still had a chance if they could have stopped Green Bay from getting a first down. That however was not to be. Rodgers worked some magic and got lucky on a tipped pass that Cobb rounded up for a critical first down. They ran the clock out as Dallas’ offense never made it back on the field. Packers win 26-21.

The Dez Bryant no catch was the story of the game, but I’m not sure Rodgers would not have been able to get the Pack close enough for a FG to still win had Dallas scored on the Bryant catch. Anything can happen though. It is a shame the refs were the story in this one at the end.

Denver looked like their fans expected on their first drive of the game. They took the ball on a methodical march down the field with little pressure on Peyton. This was after a three and out effort by the Colts. Demaryius Thomas caught the touchdown pass to make it 7-0 Broncos. This would be the best that Denver’s offense would offer all day however.

Early in the game was the only time that Denver was able to get any amount of pressure on Andrew Luck. As the game went on, the Colts’ offensive line did a better job of protecting the ALL Pro QB.

Indianapolis’ offense got the biggest play of the game for them so far when Luck hooked up with T.Y. Hilton for a 23 yard catch. The Colts ended the drive with a six yard touchdown from Boom Herron, a great value on daily fantasy leagues FYI. 7-7 ball game.

Manning got sack swiped on their next possession. It was the break the younger Colts needed to get momentum in a road playoff game. Indy recovered and Luck was set up at the Denver 41. Luck made Peyton pay for the fumble as he threw a touchdown pass to Dwayne Allen eight plays later. Colts on top 14-7.

The CBS crew made endless comparisons between Manning and Luck. I figured they would pull out a real stretch of a link with Simms having seen them use the same bathroom stall at the airport on multiple occasions.

Denver could do little on their next drive as they gave their punter a workout on this day. Indy made some plays when they got possession to get in FG position, including a 20 yard run by Luck. The oldest man alive with the ability to make clutch kicks, Adam Vinatieri, missed for just the second time all season long.

The missed FG was of little consequence. Denver could do nothing with the ball again as Manning was struggling to complete any deep balls. The guy was just not himself the past few weeks and certainly didn’t perform any better on Sunday. He had some injuries that made a difference, but I believe his arm is shot, period.

Denver got some help from their defense on the next Colts drive. Luck was picked off by Roby near mid field. Manning was off target again his next series and they were fortunate to even get a FG out of it. 14-10 Colts at the half.

Denver got the ball at the start of the second half but were no more effective then. Three and out.

Luck and the gang made short work of the Denver defense when they got possession back. They went on an 11 play drive that saw Luck hit Fleener for a big gain. That set up the eventual scoring pass to Nicks. 21-10 Colts and the game was in the hands of Indy at this point. They would have had to melted down completely to lose after this score.

Denver had no success on offense once again and had to punt. They got a break when it appeared the Colts’ return man fumbled the ball. The call was reversed however and Indy retained possession. Luck gave it right back via an INT though.

Denver scored after a 13 play drive, but they needed a TD not another FG. 21-13 Colts still on top.

After the teams swapped punts on consecutive drives, Indy finally got it going again on a long drive of their own. 13 plays later, Vinatieri hit a 30 yard FG to make it 24-13 Colts.

That would be the final score as Manning had one last unsuccessful drive that showed his inability to hit any receiver deep. The Colts gained confidence early and never looked back. Luck is as good or better than Manning at the same point in Peyton’s early career. The 2015 version of Peyton should probably retire, but I doubt he will unless John Elway runs him off like he had to do John Fox on the Monday following the loss.

The Colts travel to New England for the AFC Title next week in the late game. They will be facing a QB who is still able to throw the deep ball, unlike Manning. And Brady will not be an easy out as Baltimore found out this past Saturday with the Golden Boy coming back twice from 14 down.