Home Sports Football Ties in the NFL suck but are deserved 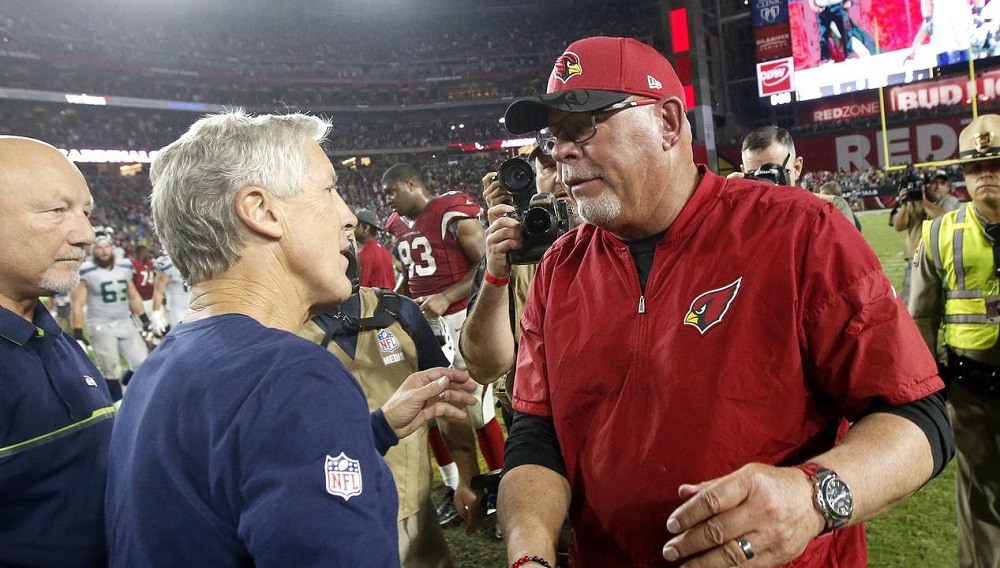 Russell Wilson doesn’t like ties in the NFL. Bruce Arians wants the NFL to change the rule about defensive guys being able to leap over an offensive lineman on FG attempts, as the Cardinals coach wasn’t happy with a tie either.

Funny how players and coaches find reasons for rule changes when it affects them directly.

I don’t recall Wilson commenting on the overtime rules before his woeful offense, that’s cost me many a fantasy win this year, failed to score a single touchdown versus Arizona on SNF. As for old school coach Arians, last year he was all for the violence of football not being legislated out. Now he is afraid someone is going to get hurt with the leapfrogging during FG tries.

Do you recall an injury happening from such a tactic? I sure can’t. Not to mention that a running back leaping over the pile to cross the goal line is no different and much more likely to cause an injury to all parties involved. The back could land on his own lineman, a defensive tackle, or get a concussion when he goes head first into the fray.

Nobody likes ties in any sport. It is about as anticlimactic as a sporting event can get. However, there is a solution. And no rules have to be tweaked. No ridiculous free kicks like Wilson suggested. No safety rules that allow the offensive lineman to eat a hotdog while the kicker lines up against a defense that must count to five-Mississippi before rushing in.

How about the teams try and win the game in the time allotted. Crazy idea right?

The first four quarters are 15 minutes each. That’s an hour of game time for you mathematically challenged fans out there. And if that doesn’t allow your team’s anemic offense to find the endzone, the NFL gives you another 15 minutes to score in overtime.

If you or your opponent cannot gain the advantage in that 75 minute period, guess what? You deserve to be tied. You both achieved a certain level of suck on that day. Arizona and Seattle can fault their offenses for staying even in their matchup.

A game that ends tied at 27 each, well the blame rests on the defenses for not making the effort needed to get the win.

By the way, ties in the NFL are not a huge issue. Just 21 ties in 42 years of sudden death overtime (which was tweaked a few years ago).

Now, there will be people who want the pros to go the college route and play seven or eight overtimes in a never-ending battle to decide a clear winner. They can keep that in the amateur ranks as far as I’m concerned. I don’t find it thrilling at all to watch a game that has no apparent conclusion.

Again, there is a time limit on the games for a reason. Why not let teams play throughout eternity if you want to see who can hold out the longest in so-called “epic” battles?

For me, I have other things to get to in my life. Like another football game. I can’t devote all my time to one contest where the teams don’t have what it takes to get the win during regulation plus an extended period. After that time period, I just assume the teams are evenly matched, for that one game anyway.

I get why Russell Wilson and Bruce Arians want to tweak the rules. They kissed their sister on Sunday Night Football. Next time maybe be a little more aggressive on offense, so none of us have to endure whining about ties in the NFL. Or suffer through 6-6 games in the first place.