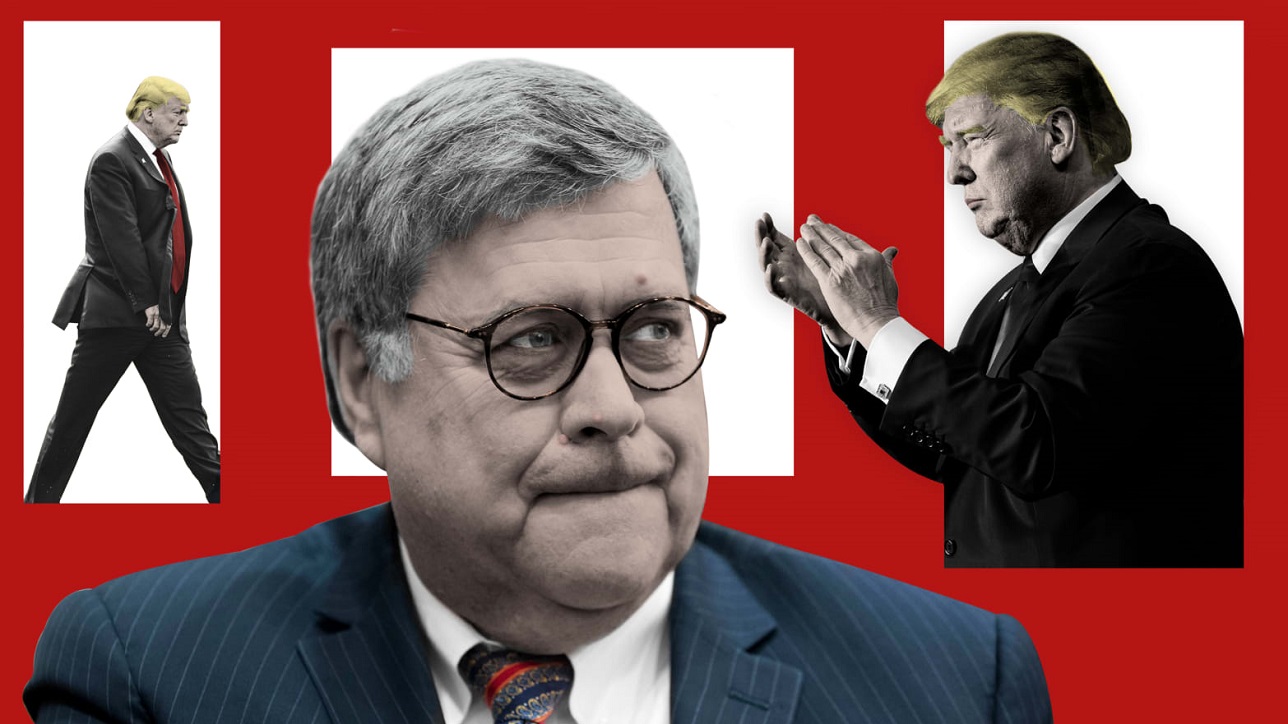 Donald Trump has always said that diehard loyalty is the way to his heart, and now, Attorney General William Barr is proving to have a very special place in it. This is the type of person that he always searched for in his business dealings, and how he wound up people like Michael Cohen. it will be interesting to see how long it takes before Barr is cast aside as many have over the decades. Even Roy Cohn, who Trump loves to trumpet, was even cast aside when his HIV illness prevented him from working.

President Trump could only be delighted to have his attorney general in El Salvador, dealing with his biggest issue: illegal immigration. Yet Barr did even better for his boss. In interviews from the Central American country, he’s been offering cryptic comments suggesting the Russia probe unfairly targeted Trump.

More and more, Barr’s becoming Trump’s favorite lawyer. He’s not only enthusiastically embracing Trump’s political agenda, he’s also gone all-in by casting special counsel Robert Mueller’s report as vindication for Trump and hinting that the real wrongdoing was committed by those who launched the investigation.

Serving as attorney general is traditionally a balancing act, carrying out the president’s agenda as a member of the Cabinet while also trying to avoid political bias in enforcing the nation’s laws. As a nominee, Barr cast himself as above the political fray. But as attorney general, he’s turned out much as Democrats feared.

He’s defied subpoenas from Congress and a House panel has voted to hold him in contempt. He provided the White House with the legal case for not giving lawmakers an unredacted version of Mueller’s report. And this week, he baited House Speaker Nancy Pelosi, asking her during a Capitol Hill event if she brought her handcuffs to arrest him.

All the while, Trump has cheered him on.

After attending a Trump law enforcement speech in the Capitol — where he encountered Pelosi — Barr flew to El Salvador for meetings on some of Trump’s biggest talking points: the MS-13 street gang and illegal immigration.

Barr toured a jail outside San Salvador — as a crew from Trump’s favorite television network, Fox News, followed alongside — and held a news conference to tout collaboration between U.S. and Central American officials that led to the indictments of thousands of gang members “who otherwise might have reached the U.S.”

Just a month after taking office in February, Barr was defending Trump in an Oval Office ceremony, as the president issued his first veto, rejecting Congress’ efforts to block an emergency declaration to fund his border wall. Barr declared that Trump’s national emergency was “clearly authorized under the law.”

Then he went further.

“And from the standpoint of protecting the American people, it’s imperative,” Barr said.

Trump handed Barr the signed veto. Afterward, he told advisers that he was impressed that Barr stepped forward to not only legally validate the wall, but support it.

That moment, according to four White House officials and Republicans close to the West Wing, began to solidify Barr’s loyalty in the president’s mind. Trump had spent months raging at his first attorney general, Jeff Sessions, for recusing himself from the Russia probe, which ultimately led to Mueller’s appointment.

After Mueller submitted his report to Barr in March, the attorney general released a four-page summary letter to Congress. Barr’s letter framed the debate about the probe over the next few weeks and, White House officials believe, allowed Trump to declare victory before the release of the full report, the contents of which are far more ambiguous.

Trump also appreciated Barr’s combative stance with lawmakers and reporters as he has defended the Justice Department’s handling of the report, and again when he declined to appear before Congress and defied a subpoena, drawing a possible contempt charge. Trump has told close confidants that he “finally” had “my attorney general,” according to two Republicans close to the White House who were not authorized to speak publicly about private conversations.

In El Salvador, Barr again talked about “spying” in the 2016 presidential race — one of Trump’s favorite talking points — and noted that Mueller didn’t look into the government’s actions against Trump. But he neglected to mention that this wasn’t Mueller’s mandate, which was to investigate Russian election interference, possible coordination with the Trump campaign and any obstruction of that investigation.

Barr hinted at wrongdoing, saying that some of the explanations he’s been told about the start of the investigation “don’t hang together.” But he didn’t elaborate.

Barr has already asked John Durham, the U.S. attorney in Connecticut, to examine the origins of the Russia investigation to determine whether intelligence and surveillance methods used during the probe were lawful and appropriate. Barr is also working with CIA Director Gina Haspel, Director of National Intelligence Dan Coats and FBI Director Christopher Wray.

The inquiry is the third such review of the matter.

The Justice Department’s inspector general is investigating the probe’s origins and the use of the Foreign Intelligence Surveillance Act, which allows the government to conduct surveillance in some of the most sensitive investigations. Sessions had appointed another U.S. attorney, John Huber, of Utah, to review aspects of the Russia investigation, following grievances from Republican lawmakers.

Barr told Fox News that he appointed Durham because “no one has really looked across the whole waterfront.”

Barr has provided no details about what “spying” may have taken place but he could be alluding to a surveillance warrant the FBI obtained on former Trump associate Carter Page and the FBI’s use of an informant while investigating ex-Trump campaign foreign policy adviser George Papadopoulos. He has said he didn’t mean anything pejorative when he used the term in congressional testimony.

Democrats have accused Trump of using the spying allegations to divert attention from Mueller’s findings that Russia tried to help Trump get elected and that Mueller did not exonerate Trump on the question of whether he tried to impede his investigation. Mueller didn’t find a criminal conspiracy between the campaign and the Kremlin.

FBI Director Christopher Wray told Congress this month that he has no evidence the FBI illegally monitored Trump’s campaign and doesn’t consider court-approved FBI surveillance to be “spying.”

James Baker, who was the FBI’s general counsel when the Russia probe began, defended the investigation to the Lawfare podcast last week, saying it would’ve been highly inappropriate for the FBI not to pursue allegations of foreign election interference.

In the Fox News interview, Barr discussed another frequent subject of Trump’s tweets: a dossier cited in the application for a warrant to monitor Page under FISA. Trump has claimed incorrectly that the dossier is what started the Russia investigation.

The FBI had been interested in Page as early as 2013 and he again attracted the bureau’s interest when he joined the Trump campaign as the FBI began looking at Russian interference. The FISA warrant used to investigate Page cited the dossier, a collection of memos authored by former British spy Christopher Steele that contained uncorroborated allegations of ties between Trump and his associates and Russia.

Steele’s research was funded by Clinton’s campaign, a fact congressional Republicans have seized on. That was disclosed in a footnote in the FISA application, which was approved by judges four times.

Barr said taking opposition research that had “a number of clear mistakes” and using it to conduct counterintelligence against an American political campaign “is a strange, would be a strange development.”