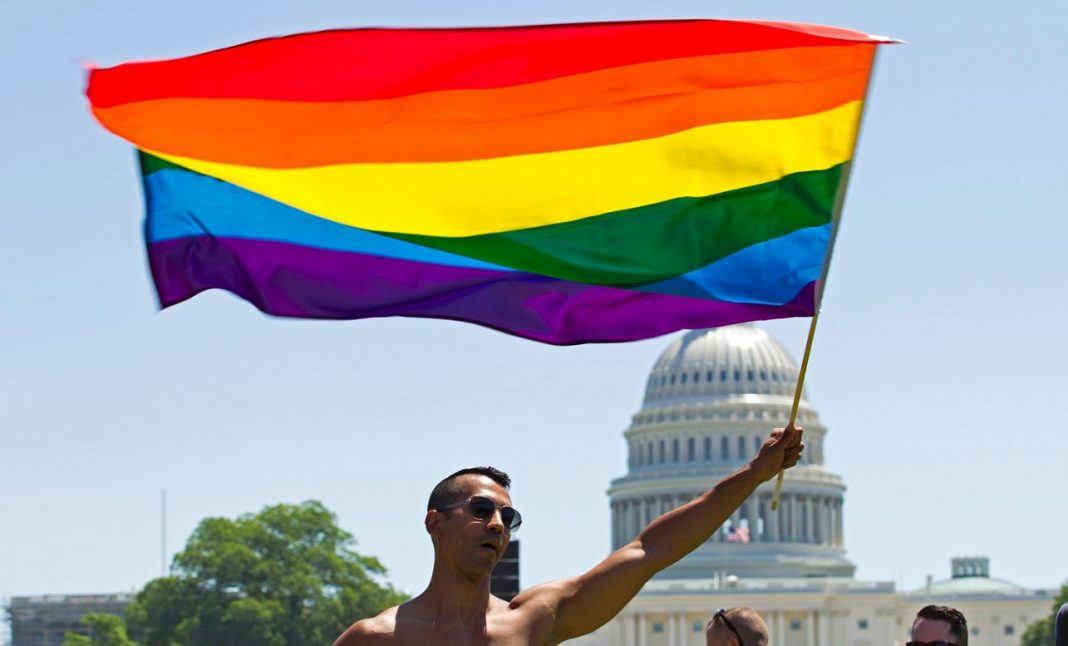 The LGBT community can celebrate today with the passing of a Democrat-led bill to expand protections that everyday Americans already receive. Sadly, it will be short-lived as Senate Republicans are already declaring it “dead on arrival” when it hits their doorstep.

“Celebrate now Dems, but you’ll be crying when your bill dies real quick,” one Senate insider said after the bill was announced. “Democrats are so busy running after social issues, they are turning off voters who only care about being able to pay their bills and feed their family. Between abortion rights and gay issues, Democrats won’t know what their platform is and just look like a bunch of bleeding heart progressives. Blue color workers will easily be driven to vote for Donald Trump again.”

It’s been feeling like there’s a very structured plan to keep Democrats focused on one social issue after another. With abortion laws passing so quickly, Republicans do appear to have outmaneuvered Democrats to lose focus on economic issues. Right now that’s a huge thing with voters in states they want to turn.

Democrats in the House approved sweeping anti-discrimination legislation Friday that would extend civil rights protections to LGBT people by prohibiting discrimination based on sexual orientation or gender identity. The protections would extend to employment, housing, loan applications, education, public accommodations and other areas.

Called the Equality Act, the bill is a top priority of House Speaker Nancy Pelosi, who said it will bring the nation “closer to equal liberty and justice for all.”

The vote was 236-173, with every Democrat voting in favor, along with eight Republicans. Cheers and applause broke out on the House floor as the bill crossed the threshold for passage.

The legislation’s chief sponsor, Rep. David Cicilline, D-R.I., said it affirms fairness and equality as core American values “and ensures members of the LGBTQ community can live their lives free from the fear of legal discrimination of any kind.”

Cicilline, who is gay, called equal treatment under the law a founding principle of the United States, adding “It’s absurd that, in 2019, members of the LGBTQ community can be fired from their jobs, denied service in a restaurant or get thrown out of their apartment because of their sexual orientation or gender identify.”

Most Republicans oppose the bill and call it another example of government overreach. Several GOP lawmakers spoke against it Friday on the House floor. President Donald Trump is widely expected to veto the legislation if it reaches his desk.

At a news conference Thursday, the Republicans said the bill would jeopardize religious freedom by requiring acceptance of a particular ideology about sexuality and sexual identity.

Rep. Vicky Hartzler, R-Mo., called the legislation “grossly misnamed” and said it is “anything but equalizing.”

The bill “hijacks” the 1964 Civil Rights Act to create “a brave new world of ‘discrimination’ based on undefined terms of sexual orientation and gender identity,” Hartzler said. The legislation threatens women’s sports, shelters and schools, and could silence female athletes, domestic abuse survivors and other women, she said.

A similar bill in the Senate has been co-sponsored by all but one Senate Democrat but faces long odds in the Republican-controlled chamber.

A Trump administration official who asked not be identified, because he was not authorized to speak publicly about the president’s intentions, said the White House “opposes discrimination of any kind and supports the equal treatment of all. However, this bill in its current form is filled with poison pills that threaten to undermine parental and conscience rights.”

Some critics also said the bill could jeopardize Title IX, the law prohibiting sex discrimination in federally funded education programs. Former tennis star Martina Navratilova co-wrote an opinion piece in The Washington Post urging lawmakers not to “make the unnecessary and ironic mistake of sacrificing the enormously valuable social good that is female sports in their effort to secure the rights of transgender women and girls.”

Ahead of the vote, Rep. Jody Hice, R-Ga., called the House bill “horrifying” and said it could cause Catholic schools to lose federal grants for school lunches or require faith-based adoption agencies to place children with same-sex couples.

At the last minute, Republican lawmakers attempted to kill the bill by introducing a “Motion to Recommit” addressing the participation of transgender women in sports.

“Through my work on the issue of homelessness, I saw trans women disproportionately affected by discrimination at every stage of their lives,” Hill stated. “They have higher rates of poverty, of sexual abuse, and homelessness. I can tell you that no trans person is trying to game the system to participate in sports. That does not happen. And that is a sad scare tactic that has no place on the floor of the People’s House.”

If also passed by the Senate and signed into law by the president, the landmark legislation would provide clear, comprehensive anti-discrimination protections for LGBTQ Americans in regard to employment, education, access to credit, jury service, federal funding, housing, and public accommodations.

“Everyone should have a fair chance to earn a living, go to school, and provide a home for their families without fear of harassment or discrimination,” said Hill, D-Agua Dulce. “I couldn’t be prouder to be a part of a new generation of leaders who are the ones to finally pass the Equality Act and fight for true freedom and equality for all.”

Neena Chaudhry, a lawyer for the National Women’s Law Center, said the bill does not undermine Title IX, because courts have already found that Title IX protects against gender-identity discrimination.

“It is way past time to fully open the doors of opportunity for every American,” said Sen. Jeff Merkley, D-Ore., one of the Senate bill’s lead sponsors. “Let’s pass the Equality Act, and let us rejoice in the bells of freedom ringing for every American.”

In the Senate, Republican Sen. Susan Collins of Maine also supports the bill, while Democratic Sen. Joe Manchin of West Virginia is the sole Democrat who is not a co-sponsor.

The eight House Republicans who voted for the bill Friday were Reps. Susan Brooks of Indiana, Mario Diaz-Balart of Florida, Brian Fitzpatrick of Pennsylvania, Will Hurd of Texas, Greg Walden of Oregon and New York lawmakers John Katko, Tom Reed and Elise Stefanik.