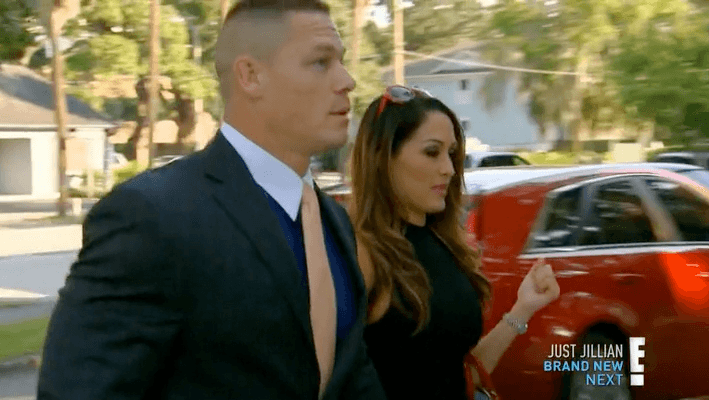 On this week’s episode of “Total Divas,” backstage Nattie talked to Renee Young and Charlotte about Renee going out drinking with Nattie. Brie and Nikki went to the Best Buddies Challenge, a charity event to help those with developmental disabilities attend school and join the workforce. They met with Maria Shriver, who was co-hosting the event. Her son Patrick was at the event too, and Shriver told Nikki and Brie that Patrick’s sisters are fans of Total Divas. While attending the event, Nikki decided she wanted to be more like Maria Shriver. She and Brie promised to get Shriver in shape if she promised to make them better motivational speakers.

In Orlando, Eva Marie and Mandy were going to train together at the WWE Performance Center. Nikki and Brie then spoke at a bike race as part of Team Maria, led by Shriver herself. Nikki was supposed to speak to the crowd of race participants, but she didn’t know what to say. She said speaking to a crowd is embarrassing because she always feels like she will be made fun of. Then Brie and Nikki each participated in the bike race.

Backstage at a live WWE house show, Alicia talked to Paige and Rosa about Daryl, a man she had just started dating. She told them she and her date were thrown out of a restaurant because she put her feet up on the back of her date’s chair and the waitress told her she couldn’t do that. She also said she was unhappy that his ex still lived in his house.

Nattie showed Jack Swagger a video she filmed on her phone of her and R Truth dancing. Then she ran into Mandy and Mandy said she and Eva Marie were getting along. Nattie told Mandy that Eva Marie and Summer Rae tried to be a tag team, but it didn’t work out. The subject came up because Mandy was considering forming a tag team with Eva Marie. Nikki told Nattie and Dolph Ziggler that meeting Maria Shriver had been inspiring. She said she wanted to do more charity work and wanted to empower women like Shriver does.

Paige was driving with Rosa and Alicia and Rosa suggested Alicia pay for a background check on Daryl. Rosa said she wanted Alicia to do the background check on Daryl because Rosa had dated a man until she found out he was married and lied to her about it. Alicia did some digging and found out Daryl had lied to her about his age. She then called Daryl and asked him if he needed to tell her anything. Paige suggested he have a 46th birthday party because he told Alicia he was 45 when he wasn’t.

Backstage at RAW Nikki talked about how much she enjoyed the charity event with Maria Shriver. She said she was so inspired that she had booked a speaking engagement for herself at the Center for Women, in Tampa. Brie said she was glad Nikki had been inspired, but she also had to be realistic. She said Maria Shriver was dressed classy and not showing her chest off, but Nikki always shows hers off.

At the WWE Performance Center Mandy watched Eva Marie train. Mandy’s boyfriend Michael came to the center and met Eva Marie. Alicia then showed up at Daryl’s house and admitted she had done a background check on him. She confronted him about lying to her about his age. Daryl said it was actually his friend that lied about his age and he didn’t say anything because he didn’t know if he would be seeing Alicia again. He said he didn’t think that him hiding his real age from her was that big of a deal. Alicia then said she was going home, and she was done with him.

In Tampa, Eva Marie, Mandy and Michael hung out at their hotel suite. Michael tried to body slam Mandy but botched it. In Jacksonville, Rosa, Paige and Alicia went out to dinner. Rosa said she wanted to have a girls’ weekend to help Alicia forget about Daryl.

Backstage at NXT Mandy and Josh talked. Eva Marie finally had an NXT match that Mandy and Josh watched. Then Eva Marie went out to dinner with Mandy and Michael. Mandy said she knew she was going to get heat, but she had asked the other divas about the tension between them and Eva Marie. After she had told her, Eva Marie said she was hurt that Mandy did that. Back at their hotel, Mandy and Michael talked about the fact that Eva Marie seemed to be angry with her. Michael said Mandy should have gone straight to Eva Marie instead of talking to the other divas about her. Mandy then knocked on the door of Eva Marie’s bedroom and said she wanted to clear things up.

Rosa woke up Alicia and Paige to continue girls’ weekend. Rosa made pickles with peanut butter on top to satisfy her pregnancy craving. Then the girls went out in Alicia’s background and stumbled across a snake on her lawn. They called animal control and went back inside to wait for someone to arrive. Alicia’s doorbell rang, and she was delivered a bouquet of flowers. The card with the bouquet was written by Daryl. He said he adored Alicia and promised to be honest with her if she forgave him. Alicia called Daryl to thank him for the flowers, but Rosa loudly called him a liar while Alicia was on the phone with him.

In NYC, Brie and Nikki met their friend Jayme for drinks. Nikki showed up in a more conservative dress than she would normally wear. Brie said she was dressed better, but now she had to speak better. In Phoenix, Brie and Nikki went out with their sister-in-law to work on Brie’s “Experience Local” project debut.

In Florida, Paige, Rosa and Alicia went out to dinner. Alicia said she wanted to give Daryl a chance because she hasn’t had a man in two years. Rosa said she had dissed every man Alicia had dated and that she didn’t want to do that anymore. She then said that she and her boyfriend have problems because she is religious and he is not. Then Rosa asked Paige how her boyfriend Kevin was doing. Paige said she couldn’t see herself with Kevin forever.

Nikki arrived in Tampa for her speech at the Center For Women. John Cena accompanied her to the speaking engagement. She told him she was very nervous about speaking. Brie called Nikki to wish her good luck. Afterward, Nikki said she had conquered her fear of public speaking.