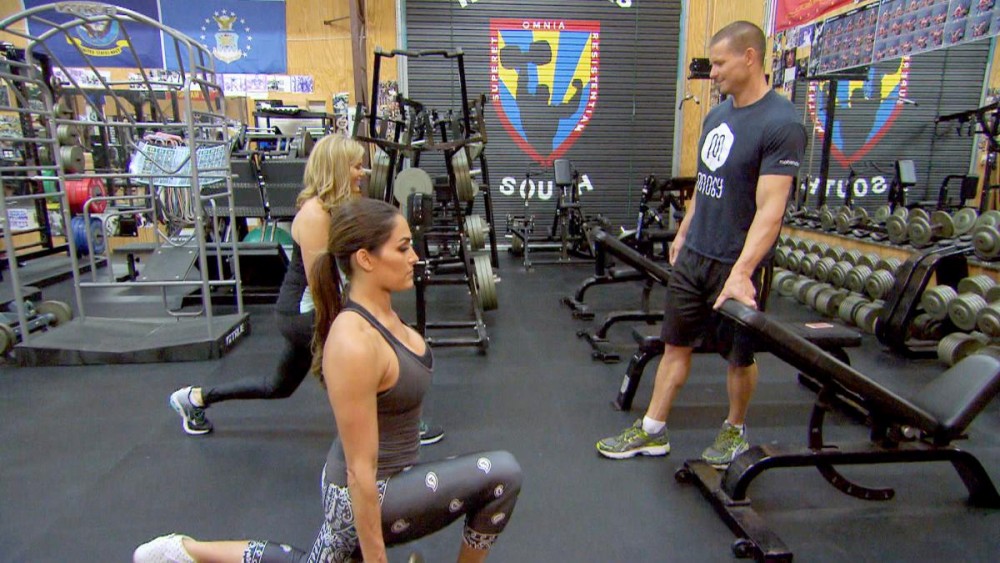 On this week’s episode of “Total Divas,” Nattie went to her parents’ house to give her mother a makeover. Backstage at Hell in the Cell, Nikki had a rematch for the Divas Championship and said she hoped she could win back her title. Even though she lost the match, she said she was passing the torch on to another Diva.

Nattie, Rosa and Mandy met for lunch and Rosa asked them what they thought about Bobby going to Las Vegas with his buddies and leaving her at home. Nattie said Rosa is fragile when it comes to her love life. Rosa expressed concern because Bobby’s best friend is a rock star and she knew women would be hitting on Bobby in Las Vegas.

Nattie said the family should do family photos, and her dad suggested a group family tattoo. Because of all the traveling Nattie’s family did, they had no photo with everyone in the family.

Nikki told Mandy she had an MRI on her neck. Then Nikki met with a WWE doctor so he could tell her the MRI results. The doctor said she needed exercise and physical therapy to treat a slipped disc in her back. She was told she may have to stay off of TV and out of the ring for a few months.

Nikki and her mom went to Nikki’s physical therapy appointment and asked the doctor how long she would be out of the ring. He couldn’t give her an answer but told her to use a neck brace several times a day.

Nattie complained that the outfit her mom was dressing her dad in for their family photo was weird looking and she didn’t like it. Nikki told her mom she was told it would be four to six weeks before she could wrestle again but she didn’t think it would take that long. Nikki said John Cena could help her with physical rehab because he has been through it so many times. Nikki called John and asked him to help coach her through physical therapy.

Rosa picked up Mandy and her brothers and took them to the beach with her. Rosa said she wanted to stalk Instagram and see what Bobby was up to in Las Vegas. She saw a picture of him shirtless at a pool party with his buddy. When Rosa called Bobby, his phone went right to voicemail. She said when men don’t answer their phone they are usually up to something. Mandy said Rosa didn’t seem to want to think about anything other than Bobby and Las Vegas, so Mandy tried to distract Rosa.

Nikki went to her first day of training with John as her coach. Rob, John’s trainer, also helped train Nikki. Nikki was using her phone during training so John took it away from her until they were finished the training session. Mandy and her brothers went to Rosa’s house and asked if she had heard from Bobby. Rosa said she was feeling neglected because he hadn’t called or texted her. When he finally called, he asked her about a picture she posted on Instagram of Rosa with Mandy and her brothers. She asked him if he was mad at her and he said he didn’t know at the moment.

Rosa, Mandy and her brothers went out for sushi for dinner. Mandy asked Rosa why she was so crazy with jealous and worry about Bobby being away from her. Rosa said everyone she’s ever dated has cheated on her and been verbally abusive. She also said it is hard for her to trust men because she has been hurt so much. Mandy’s brother told Rosa to trust her feelings for Bobby.

The photographer came to Nattie’s house to take their family portrait. Nattie was angry that other family members were drinking wine because she wanted everyone sober for the photo shoot. Nattie’s sister Jenny accidentally broke a wine glass during the shoot. Nattie said she was disappointed no one was taking the shoot seriously. Nattie vented to TJ that she didn’t want the family wearing ugly outfits for the photo shoot and he said they had fun and that’s all that should matter.

Nikki and John went out to dinner with Nikki’s mom, and John told Nikki she could only have one glass of wine because of training. Nikki said she wanted to live a little. John asked Nikki how many times that day she had used her neck brace, and she said he was getting on her nerves.

When Bobby got back from Las Vegas, she asked him to tell her about his trip. Rosa asked if Bobby was mad at her when they were on the phone. Bobby said he wasn’t mad but Rosa wasn’t making sense. Rosa said he needed to put her and the baby ahead of going to Las Vegas with his buddy. Bobby said he was secretive in Las Vegas because he was shopping for an engagement ring for her and that is why he wouldn’t take her with him.

Back at home, John made Nikki use her neck brace even though she said she was OK. Nikki said John was getting on her nerves too much about her training and health and that she didn’t need him to act like he was her father. Nikki told John he was overbearing. Nikki’s mom said John was acting like the coach Nikki had asked him to be and that she shouldn’t shoot him down for it. Nikki then apologized to John for being mean and said she shouldn’t have gotten irritated. She said her mom made her realize he was doing what she asked him to.