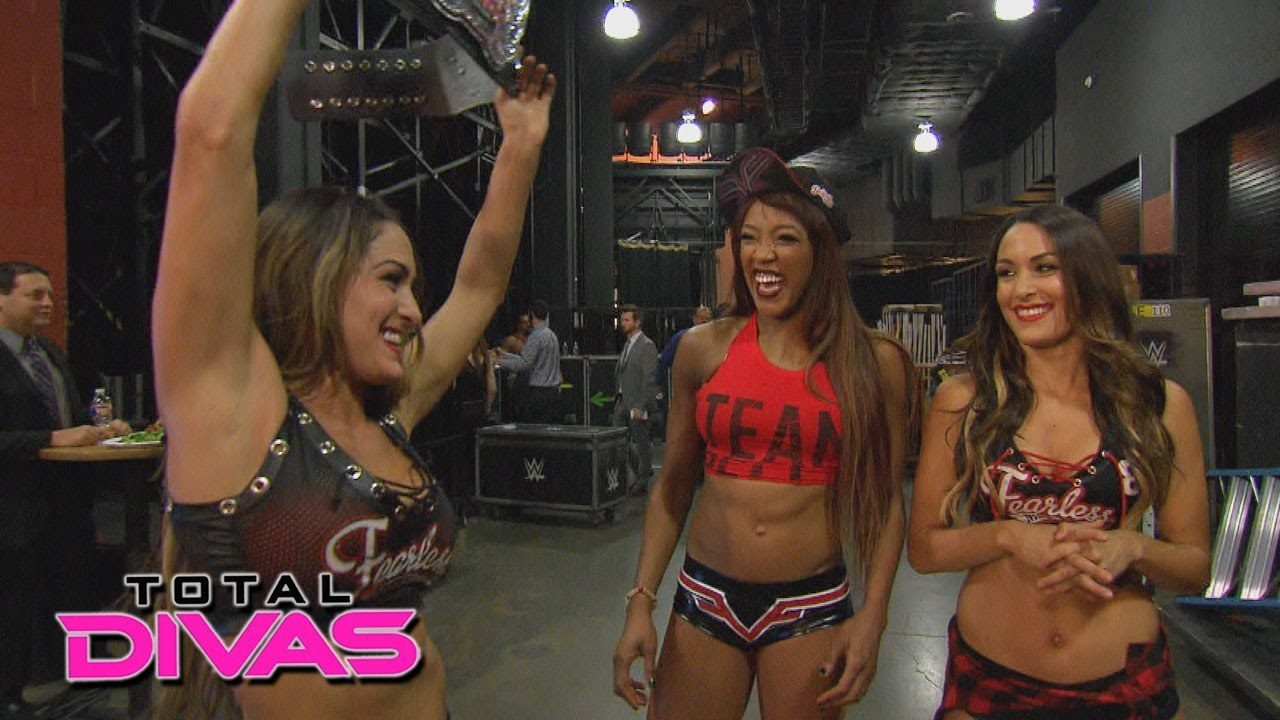 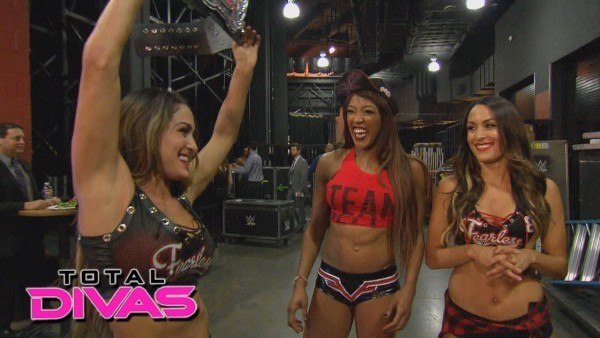 On last night’s episode of Total Divas, Paige, Alicia and Rosa talked about Rosa’s unborn baby. Backstage at RAW Mandy and Nattie talked about a special needs fan Nattie had just met. Mandy asked Nattie for help learning the ropes of WWE. Nikki talked about her reign as Divas champion.

Eva Marie and Mandy met Paige, Alicia and Rosa for breakfast. Alicia mentioned planning for Rosa’s baby shower. Paige said it should be a party rather than a shower. Mandy asked the girls what they thought of her and Eva Marie forming a tag team.

Nikki’s mother told her she had to change her wrestling style because it was taking a toll on her body. Brie said she wouldn’t sacrifice her body for her career.

Paige and Alicia went with Rosa to shop for items for the baby shower. Paige said Rosa’s boyfriend and father of her baby is a good friend of hers.

At the performance center, Mandy and Eva Marie trained together. Jonathan had gotten a cameraman ton film a documentary on the two of them.

Nikki and John went out to dinner, and John confessed he had just bought 55 suits in New York City. Nikki told John her back hurt, and she had a spasm so bad she could hardly stand. He gave her a back massage to take the pain away. She said she felt like her body was cramping everywhere.

Eva Marie invited Mandy to take part in her video shoot for promotional purposes. The video shoot was held at a local outdoor pool. While training together, Sheamus told Nikki he was selling his house because it was too big for him. Nattie came in to workout with them and showed Nikki how to work out without hurting herself. A friend of John’s told Nikki to see a doctor about her back.

Backstage at Smackdown Brie, Rosa and Alicia watched Eva Marie’s match and talked more about Rosa’s baby shower. Brie drove Nikki to the doctor to have her back checked. They talked about Nikki’s record as longest-running Divas champion.

At the doctor’s office, Nikki got a needle in her neck to treat her back pains. The doctor told her she needed time to relax her back and heal. Nikki then considered taking a break from wrestling.

At the performance center, Nattie used her day off to help Mandy train. In the middle of training, Mandy asked Nattie to take a selfie with her. Nattie got annoyed because Mandy was too caught up in her image to concentrate on training. She told Many she was wasting her time by not taking the training seriously. Nattie left the center, and Mandy followed her out the door to apologize for upsetting her. Nattie said she felt the apology was sincere, but she still wanted to take the time to train Mandy.

Alicia said she was going to plan the baby shower for Rosa to be at Alicia’s house in Florida, but Rosa wanted it in L.A, the area she lives in. Alicia said they would have to change the date to do that, and she thought that was insensitive to the invited guests. Alicia called Rosa selfish and Rosa said Alicia was the selfish one.

Backstage at RAW, Rosa vented to  Mandy about the scheduling of her baby shower. She said it wasn’t her party anymore and wasn’t going to be about her baby. Brie tried to talk Nikki out off getting in the ring with a bad back, but she insisted.

At lunch, Paige, Rosa and Alicia talked about the baby shower again. They argued about the date and location and Alicia and Rosa once again accused each other of being rude. Alicia apologized to Rosa but said she thought Rosa was being cold towards her. Rosa said she was hurt by Alicia and she was grossed out by her.

Nikki talked about how she and Brie used twin magic in Nikki’s match so that she wouldn’t make her back injury worse. Backstage, Nattie and Rosa congratulated Nikki. They went out to dinner to celebrate Nikki Bella’s history making Divas championship run. Alicia said she and Rosa had too much heat between them. Brie made a speech saying how proud of Nikki she was. Then Alicia made a speech and said she was proud of Nikki but that she had something to say to Rosa. She then apologized to Rosa and said they could have the baby shower wherever Rosa wanted it. Paige asked Mandy who the hottest WWE superstar is, and she said Dolph Ziggler, who happened to be at the celebration.