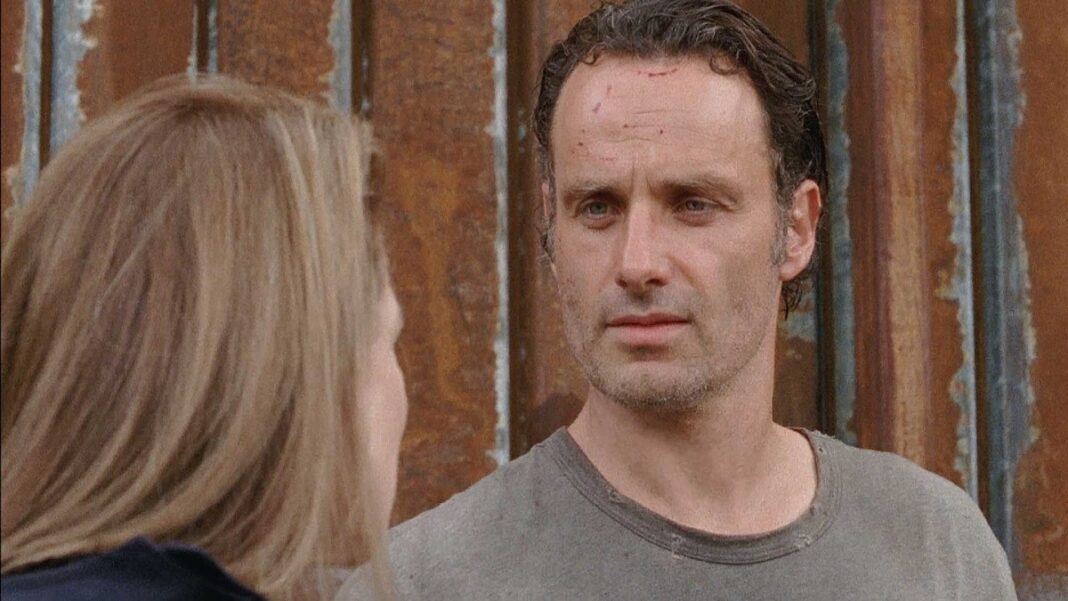 This week’s “The Walking Dead” episode ‘Remember’ had an eerie feel to it. Everything was just too perfect for a group that has spent so much time in an imperfect world outside those gates of Alexandria. They had a light-hearted moment when they first entered the community as Daryl saved the group from an opossum, then announced to the city dwellers, “We brought dinner.” Daryl would not be so easygoing the rest of the episode.

The person in charge of Alexandria is Deanna Monroe, a former Congress Critter. This should throw up red flags since some of the most diabolical people are those involved in politics. Deanna is “interviewing Rick” and the reason for filming it is because they are all about transparency she says. Pretty flimsy reasoning, but Rick doesn’t protest. He tells her a bit about what they’ve had to do to survive and how she should keep the gates closed to outsiders. Basically Rick lets her know that everyone is out to take something from others if it increases their chances of survival.

Rick asks what Deanna has done to survive and she admits to exiling three men, which is like a death sentence. This is hardly the type of actions on the level of what Rick and company have done. It’s just a token response to make it seem like she knows what it takes to get by. I feel like these video sessions will come back to haunt Rick and his crew. Alexandria is trying to be just like a real society back in the former world. Admitting to killing other human beings could be a real death sentence in a place that may have laws and punishments set up.

Deanna can see that Rick knows how to take care of his people and asks him to help her group survive. It seems like they’ve done a good job of that on their own. Everywhere Rick’s people go there is death, chaos, and general mayhem. She might be wise to just send them packing. The Grimes gang finally relents on giving up their weapons, which can be checked out when they need to go outside the walls. This is an obvious mistake. I don’t see why Rick would go along with this since it was clear the Alexandrians were not going to forcibly take them. As an aside note: fans of “The Walking Dead” comics will know that the producers have changed the sex of the character to a woman played by the amazing Emmy-nominated and Tony-nominated actress Tovah Feldshuh (some of you may remember her as the public defender in “Law & Order). She takes over the character from the comics Douglas Monroe, which makes things exciting as we don’t know where the writers will go with her character. I found myself liking her right off solely based on the roles she’s played on Broadway and television which was a very smart casting choice.

Don’t expect Deanna to make any intentional nods or homages to Douglas, either, as Feldshuh has kept herself in the dark where the comics are concerned. Speaking with EW about her knowledge of the gender swap, here’s what the actress had to say. “I knew it was a man but I didn’t want to read the comics because I don’t want to know if she dies and when she dies. Because I just assume I’ll be on this series for years to come. I want to have a long life on this series.”

Aaron appears to be the local real estate agent as he shows some houses to Rick and Carl. They explore the homes a bit and then Rick sheds the “living under a bridge look” he has been mastering over the last few months by showering and shaving. Things seem to be going great as he gets a home goods delivery from a nice looking blond lady named Samantha, a definite 10 in a zombie encrusted world. She happens to be a stylist and gives the man a haircut to go with his clean shaven face.
Daryl does his interview, but is certainly not into it. Dude could use as shower and Samantha’s mobile grooming service too. This hardened warrior is not going to bother cleaning up much until he is sure he doesn’t have to get his hands dirty during the early stages of this visit to Alexandria.

Michonne was really having a hard time on the road because she is instantly in love with this new home inside safe walls. She tells Rick, “I have a good feeling about this place.” I have a bad feeling since I’m watching a show that has seen tons of backstabbing, mass killings, and weirdos galore. I don’t think that’s going to stop suddenly and The Walking Dead turn into a sitcom! Team Grimes goes out exploring a bit and Rick freaks right out when he can’t find his kids. The helpful Samantha shows him they are hanging with some old folks on a front porch. This places seems totally untouched by the horror of the outside world.

Rick got to meet Samantha’s husband while taking a midnight stroll. He isn’t near as friendly as his better half. Carol showed her savvy as she totally lied about who she was to Deanna. She made herself out to be the June Cleaver of the group, cooking and mothering the members as needed. In fact she is as cold blooded as anyone on Team Grimes, but it would be foolish to give any info to this Congress Critter. Carol dresses the part of a Pleasantville mom as she heads out to do her “job” that Deanna has appointed her. Daryl tells her, “You look ridiculous,” as he stands on the porch looking absolutely grimy, with a crossbow on his back, and wearing a blood stained leather vest.

The danger that we kept waiting on started to appear late in the episode. Rick heads outside the gates and back to the spot he left his gat in the junk pile. No pistol! Some Alexandrian must have taken it so now the paranoid lawman is even more nervous about taking his flock into this new city. He and Carl carve up some walkers to stay sharp and get their daily exercise. Don’t want to get too soft with showers and creature comforts.

The supply run that Glenn goes on with Deanna’s son Aiden is when crazy rears its ugly head. Aiden is either a lone wolf psycho or just the tip of the spear. He and his partner lost a few good members on a supply run a few weeks before so they hung up a roamer as revenge. I’m guessing they torture the poor bastard each time they pass by. This is clearly dumb and the thing has escaped when they come to the tree where they left it. Escapee walker shows up and nearly bites Aiden’s dumbass before almost getting a piece of Tara. That’s when Glenn steps in and delivers a death shank to the walker, with Tara stabbing the thing as well. Aiden is pissed as they didn’t follow orders. Never mind the fact that he was nearly infected and could have gotten them all turned into the undead.

When the folks on the supply run get back inside the gates, Aiden announces that Glenn and his people aren’t ready for these missions. Glenn tries to hold his tongue, but Aiden is such an idiot, he can not. They had some words then Aiden swung on Glenn who slipped the punch and floored the arrogant little rat bastard. Daryl had his boy Glenn’s back as he speared the gate guard, Bill Goldberg style.

As that scuffle unfolded, Rick stepped in before Daryl attempted to skin gate guard dude like he did the opossum earlier. Deanna admonished her entitled boy and announced to everyone that Rick’s family was a part of their community now. She made a public showing of how she expects everyone to interact. Whether it was real or not is to be determined. She uses this time to ask Rick about being the constable, along with deputy Michonne.

Rick takes on the role of town cop and even has a uniform to go with the job. Can’t wait to see what Michonne looks like dressed as a county deputy. Rick tells everyone they can sleep in separate houses if they like. This could end up being the first crack in the foundation of Team Grimes. When they all stayed together on the road, they had to depend on one another. Food, safety, and general well-being was dependent on the individuals working as a group. In their own houses with running water and other modern conveniences, the individuals no longer need the family as much. It mirrors our real world today with the disconnection between families due to smartphones, TV, and working all the time.

Constable Rick Grimes asks Daryl, “You OK with this,” as he strolled outside with his cop outfit. Dixon thinks they are gonna simply get weak by staying in Alexandria. Just when we think Rick is softening up, he makes the proclamation, “We won’t get weak — that’s not in us anymore. We’ll make it work. But if they can’t make it, then we’ll just take this place.”

Let us just assume that Deanna has the best of intentions. That’s a reach, but even if that’s the case, Rick is doing what is best for his people. In this world, a great leader wouldn’t go along with another group’s leader just to be kind. Genghis Khan didn’t just hand over control of his armies to other people in charge of cities he conquered. He did what was best for himself and the ones closest to him. That’s what Rick plans to do, no matter what situation they find themselves in or how nice this community appears.

Check out the sneak peek trailer below as it definitely shows things will be amping up again for our Walking Dead gang.