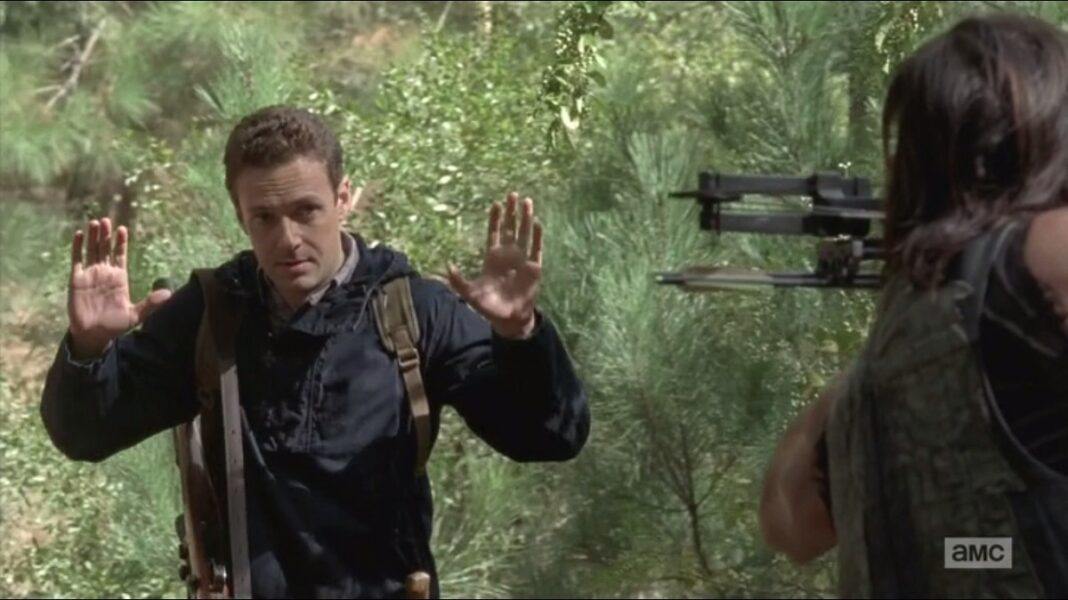 This week on The Walking Dead some of our favorite apocalypse survivors have a hard time adjusting to the new world of Alexandria, while a few start to give it a chance. The place is seeming more and more legitimate. The eminent threat may never show itself from the Alexandrians like we all would expect. The threat may just be Team Grimes themselves as they fail to adjust to a place with some actual promise. They’ve become the pack of wild animals let into a tame household, and there were plenty of hints dropped regarding this too.

Sasha is having as much trouble as anyone getting used to her new surroundings. Memories of people very close to her are fresh in her mind. It wasn’t long ago that Bob and Tyreese were tragically killed off. The sharp shooter checks out a weapon for some target practice outside the walls of Alexandria. Her intention is to draw out some walkers for some combat, but is disappointed when none show up.

Carol, Daryl, and Rick meet up at the old house where Rick had stashed a pistol. They discuss taking a few guns back with Carol providing a way in since she is now invisible in her role as June Cleaver. I’m not sure why Rick needs a stolen pistol. He is already carrying his big .357 as town constable. Carol kills a walker during their secret meeting and Rick notices a “W” cut into the forehead. I could Google some spoilers on this, but I’m going to remain spoiler free. But if you recall a few episodes back when they took Noah back to his hometown, the message on the wall was about wolves so we can see if the ‘W’ does mean wolves, and if it does, all you comic book readers of the series know what’s coming down the pike!

Michonne gives me what I wanted….she is now outfitted with her deputy uniform. It seems to have laces on the back so she is a bit more stylish than her superior, Rick. She tells Rick that Deanna seems smart and he wants to know if that applies to then or now. “This is now,” Michonne tells him, trying to make him believe in the place. Deanna was smart in the former world I am sure. I just don’t know if she has been more lucky than smart with her groups’ situation in Alexandria.

Daryl is out and about when he finds Aaron following him. That’s Daryl’s take on it even though Alexandria’s recruiter says he’s just out hunting rabbits. These two have an interesting day together as they hang out in the woods for the day. Aaron says he was out shooting rabbits, but you know he wanted to get some one on one time with Daryl outside of the city walls as they are both outsiders.

Deanna gives instructions to Michonne and Rick so they know exactly how she envisions their role in the town. This lady is way ahead of herself as she talks about the future of Alexandria with “commerce, industry, a real government, etc.” she must think eBay and a local ‘Whole Foods’ are just a few months away. Rick is shocked that no one is manning the clock tower. He assumed it was manned at all times for safety. Deanna agrees to put someone up there full time and Sasha wants to work there as much as possible.

Carol is doing a wonderful job in her role as group mom. The Alexandrians believe she is just a simple lady that is fitting in well with them. She is exchanging recipes instead of gunfire in this episode. Daryl and Aaron try to catch a horse that is known to the town’s folk as “Buttons”. Pretty weak name for a horse, but even a horse with a pathetic name would be useful to Alexandria. Their little roundup is interrupted by a couple of walkers and the horse gets away.

As Daryl and Aaron track Buttons the horse, Daryl is being encouraged to open up a bit to the town’s residents. Once they get to know him things will be easier for everyone. Dixon ain’t tryin to hear that though. Once again, the people of Alexandria seem genuinely good for the most part.

The party at Deanna’s house starts off well enough. Rick gets to meet Deanna’s husband, the Howard Roarke of Alexandria. He is impressed with Rick and how he has taken care of his group all this time. Rick tells the husband that the wall he built was no small accomplishment as they toast each other. Rick’s eye is caught by the lovely stylist as she enters the party. Jessie, whom I referred to as Samantha last week due to an IMDB mix up on their part or mine (theirs!), is played by Alexandra Breckenridge.

Daryl and Aaron’s rodeo hits a speed bump when Buttons is taken down by a handful of walkers who have a feast on the majestic creature. This is a real shame, not only for the loss of a helpful animal to the town, but for the pure fact of losing a creature that has such a long relationship with mankind. Dogs are man’s best friend, but a horse may be more than that for the people most familiar with them. By the way, Aaron is no slouch out in the field when it comes to slaying roamers. Dude is a good shot and not afraid to get dirty.

The party is still going well when Noah wants to leave as he just feels uncomfortable. Glenn gets him to stay and tells the former hospital worker that they are all in this together. Glenn is a great wingman it turns out. Daryl hangs around outside the party like George McFly trying to make a decision on entering the prom. Dixon looks like he may have even showered. He thinks better of entering the party and heads home. He gets stopped by Aaron, who invites him in for dinner with he and Eric. Daryl accepts and seems to enjoy himself.

Carol does her job as she uses her June Cleaver cloak of invisibility to sneak away from the dinner to steal some guns back. This is the beginning of the destruction of trust between the two groups. Rick and his inner circle are the ones to blame! If things go sideways, this can be pointed to as the moment that turned the situation ugly. Rick is busy chatting with Jessie and gets an “A” stamped on his hand from her boy Sam.

It turns out that Daryl is employable after all. Aaron shows him the parts to a bike in his garage and wants to know if he would be interested in being a recruiter for the town. “You know the difference between a good person and a bad one,” Aaron tells Daryl. That is a good skill to have in this community, while Rick’s assumption that everyone is dangerous works better on the road.

It was clear to me that Carol was gonna get caught sneaking into the supply house to get those guns, and I was right. Jessie’s little boy Sam had followed her then confronted Carol as she snatched the weapons. She makes nice and offers a big batch of cookies for his silence. He makes the mistake of admitting he will have no choice but tell his mom. At that point Carol shows her true survivor colors when she threatens the little guy with being tied to a tree far from the safety of Alexandria. She paints a scary picture of him being eaten by walkers as he screams for help. Carol is still the same person who whacked two sickly people at the prison to protect her tribe. That hasn’t changed. She is the angel of death dressed in khakis. You’ve got to check out the video again as it’s so worth watching this scene more than once.

The party saw some drama when Jessie handed Rick’s baby back to him. Rick took the opportunity to steal a kiss on the cheek. I’m guessing the alcohol played a part in this poor decision. Sasha added to the drama as she exploded after hearing a bunch of mundane party talk and people with their party snacks. She, like the rest of her crew, is suffering from PTSD and an outburst like that should be expected. So if you’re keeping count, it’s Team Grimes that aggressed against the Alexandrians. Rick took steps toward adultery, Carol broke the gun control laws while breaking and entering, and Sasha went Kardashian at a social event.

An interesting thing happened when Carol met back up with Rick and Daryl to distribute the stolen weapons. Daryl passed on his. He seems to have turned the corner on trusting some of the town’s people and besides that, it appears pretty easy to just take over the supply house if the need arises. Michonne also hung her sword above the mantel at her home signifying her willingness to move past the daily battles she has endured before finding this safehaven.

At the end of the episode, Rick hears a walker on the other side of the wall and rushes to the sound. The aerial shot we got was pretty cool. It showed the constable and the walker with a simple wall dividing them. It demonstrated their safety from the very effective structure. The shot from above also showed two opposite worlds as well and what is needed in both. To survive on one side of the wall requires ruthlessness. The other side only requires being human once again. But then on the other side of the coin, it also could look like Rick is on another downward spiral and feeling as deadly as what’s on the other side. Throughout this episode, he was really focused on the danger of humans, so we know he’s headed for another tailspin, but who’ll be saving him this time from himself?