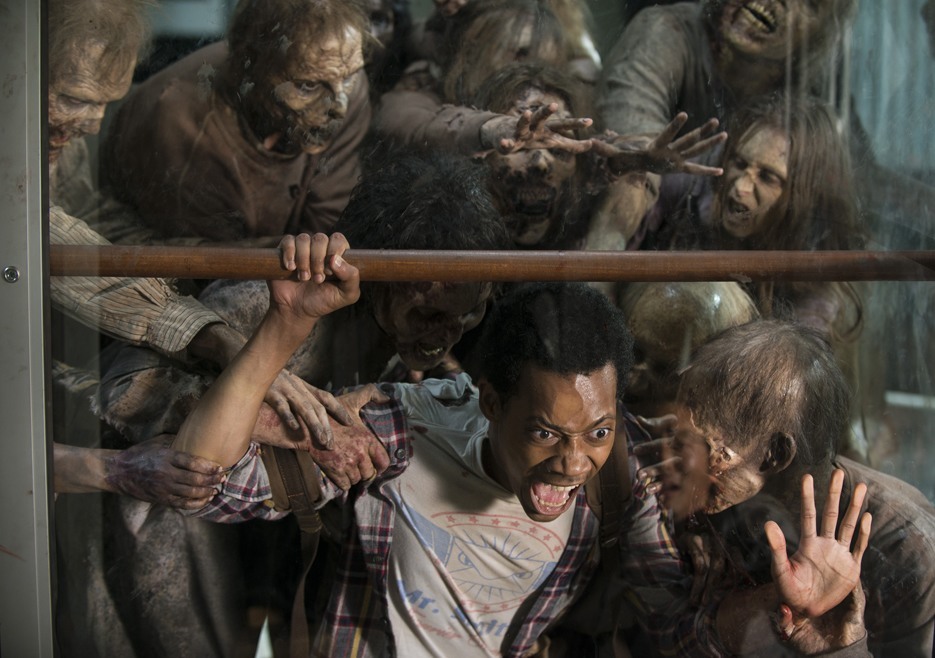 The title for this week’s episode of The Walking Dead has me puzzled as I’m not sure what meaning ‘Spend’ holds. The opening is a scene of Father Gabriel tearing pages out of a Bible after seeing a nice note from a townie saying how blessed they are to have him in Alexandria. Gabriel shows his true colors once again near the end of this episode.

There was a good deal of hope at the start of the show as Daryl rolled around on a motorcycle once again. Noah, with aspirations on being a student of architecture, asks Reg to teach him about his craft. The wall builder seems more than happy to mentor the young man and gives him a journal to keep up with his teachings. This journal turns out to be one of the least used in the history of journals. This is where the show always sets up giving that little glimmer of hope, so it’s gotten to when the one person who’s becoming hopeful or the moral compass of the show, I know they’ll be dead by the end of the hour. It keeps us coming back, but man have they really been packing on the punches this season!

The big plot was another supply run as Tara, Glenn, Aiden, Eugene, Noah, and Nicholas (Dickless gate guard) head out to get some power grid replacement parts. Eugene is worthless, Aiden is a nut job, and Noah is still hobbled, so this isn’t the best group to send out. Or maybe it is if you want to thin the herd of the less useful folks. If that was the case then it ended up working pretty well.

Rick strolls by Jessie’s house to find someone has vandalized an owl statue. She says it’s no big deal, but the local constable can’t just let something like that go and he tells her about the broken window theory. Keep the little things in check and bigger crimes won’t have a chance to materialize is his thinking. Basically, she could call Rick if her curtain blew open and he’d be more than happy to explain how blowing things can be a good thing sometimes.

The supply run group arrives at a warehouse where a large number of walkers are trapped behind a big gate inside. The cowardly Eugene is checking boxes for the specific electronic part they need along with Tara. They luck up and find the parts, but things get sideways when Aiden is attacked by a walker with bulletproof gear. He smartly shoots the thing in the leg. His next move isn’t as smart as he shoots the zombie again and hits an explosive device attached to the walker’s armor. The explosion sends Aiden into a splintered mess on a pallet rack apparently killing the rat bastard. The blast also opened up the gate that was the only thing between a pile of roamers and Glenn’s crew.

Tara was also badly hurt in the explosion and Eugene is charged with protecting her. Glenn, Noah, and Nicholas are going to try and get to Aiden who actually survived the explosion, but is pinned to the pallet rack in a nasty fashion. A bullet to the guy’s head would have been more merciful. Even if he survives, his body is mangled to the point that Alexandria’s drunk doctor couldn’t patch him up in my medical opinion.

Meanwhile Abraham is helping with some wall construction when walkers come out of the woods to wreak havoc. These Alexandrians are pretty bad at dealing with walkers. It’s as if they have only seen the creatures on rare occasions and their response is to cut and run after shooting wildly at them. Oh, and leave behind anyone not close enough to safely help. Big Abe saves a lady that was going to be left to be eaten. He was so impressive that the guy that was in charge of the construction crew told Deanna that Abraham should be in charge of that project. (Check out the video sequence of bad ass Abraham going into military mode below)

Glenn and company's attempt at saving Aiden fails miserably as they can't pull him free from his death trap. Nicholas is the first to give up as he flees the scene and Glenn has to run as well at the last second. Aiden died one of the worst deaths I have witnessed on 'The Walking Dead' and that's saying something. He probably deserved it since he and Dickless were responsible for the deaths of "the good people" they lost on a supply run prior to Team Grimes arrival.

Sam wasn't deterred much by Carol's threats against his life last week. He is found hiding in her closet and wants more cookies. She gets him to steal some chocolate and later finds out that he broke the owl creation at his mom's house. Oh, and he wants Carol to get him a gun. It's becoming clearer that this kid has seen some bad stuff, most likely the beating of his mama by his alcoholic dad. Carol can see the signs pretty easily as she has been in that predicament herself. Back at the warehouse Glenn, Noah, and Nicholas wind up trapped in a revolving door with zombies on both sides. This is as bad as it gets. Well almost. It gets worse when they have to crack the door open enough to reach for some more ammo. That causes Noah to get yanked out by the legs as Glenn can't hold on. Noah probably wished he was still back at Grady Memorial Hospital once he started getting his face ripped apart right in front of Glenn. Aiden's death was horrible and Noah's fate was just as bad. Noah's character had a very short run on the show, but before we mourn the little guy let's remember that it was his fault that Tyreese died so....

Nicholas got free of the door as Noah was turned into a bloody mess. He tried to get Eugene to leave the scene in the van, but the hillbilly pseudo-scientist has grown a set of balls in the past hour. He stands up to a guy more cowardly than himself and holds him off long enough for Glenn to make it back to knock out Nicholas. It's going to be interesting to see what happens when the former Congress critter finds out her boy is dead and I'm sure Nicholas' story is going to be dramatically different than Glenn's. Gabriel is still the same man that locked his congregation out of their church to save himself. He has a talk with Deanna about Team Grimes. He basically calls Rick and his people the devil and says they can't be trusted. Maggie overhears the conversation as the preacher man trashes the people that are responsible for saving his sorry ass!

I'm not sure this warning is going to mean much. After this week's episode, I am fully confident that Carl and Judith could probably take over this town at the drop of a hat. The Alexandrians are simply incompetent. They have a wall and good luck, that's about it. Carol has to tell Rick her theory about Jessie's husband Pete. Her evidence is that "she just knows." That is likely good enough for Rick. It doesn't take much to convict a person in his eyes nowadays. Carol's advice, "You're gonna have to kill him." That's her go-to move after all. When in doubt, just kill em. I don't think Deanna would condone having the constable just start whacking people who have not been proven guilty in some kind of court. She may have little choice in the matter though. Team Grimes is taking more power every day in Alexandria. I look forward to next week and how Deanna will change once she finds out about her boy's death. She may lose much of her trust in this new group. I also look forward to the death of father Gabriel. I hope his is one in which he is hung out to dry just as he has done to others. I don't care if Rick hacked a man to death in a church. If he and his people saved my life, he is a saint, period.

Some of the best character development happened in this episode too which is definitely building towards what we can only expect to be a very very powerful season finale to a very powerful season. I'm ready for the Ricktocracy to return for Alexandria.