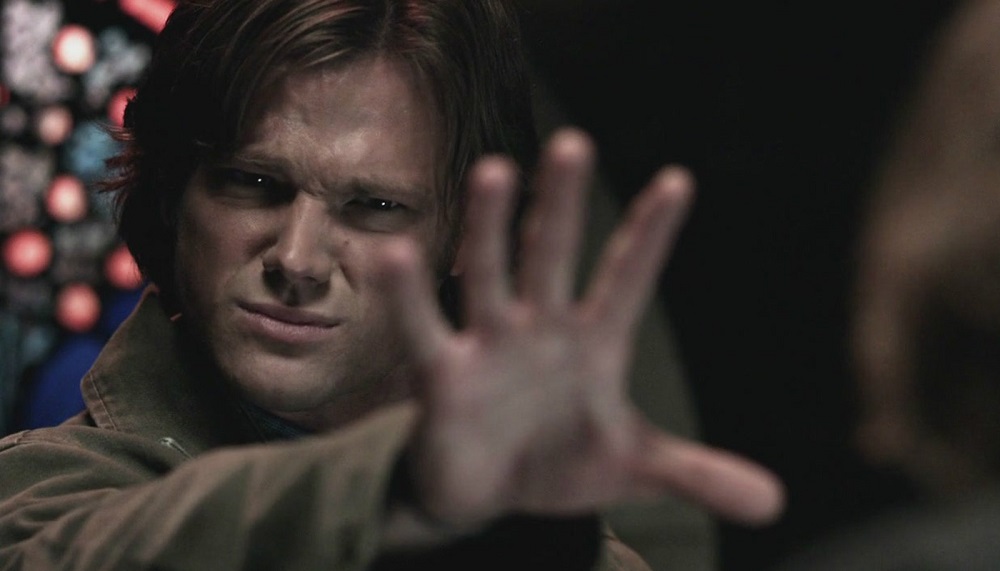 Happy birthday, Sam Winchester (Jared Padalecki). Yes, it’s one day late (that was our editor’s fault), but it’s the thought that counts!

Look, it’s not a secret that while I love both brothers, my heart is a little softer when it comes to Sam. Maybe it’s the eyes; maybe it’s the hair, maybe it’s how someone who is 6’5” can look so small and vulnerable.

In the past handful of episodes we’ve seen what happens when no one, not even Sam himself, takes care of that heart, so while I’ll provide an overview review of several episodes in one go, the theme is going to feel like I’m just “My Poor Sam’ing” all over you.

And I am. That’s your fair warning.

At the end of “The Thing,” we saw the full return of Gabriel after seeing him briefly several episodes ago. This is a being that forced Sam to watch Dean (Jensen Ackles) die day after day for months, nevermind that he allowed Sam to spiral into a laser focused hunter fixated on getting his brother back no matter the cause or casualty. Yet Sam Winchester slices the stitches keeping Gabriel mute with delicate care.

“The Thing” was a pretty good bread and butter episode with a nice bit of Men of Letters lore woven in, yet we’re forced to end the episode with Ketch and Gabriel so that we can attempt a seamless transition into the next episode “Bring ‘Em Back Alive.”

We’ll get back to Ketch in a bit, but first…

Listen, Gabriel isn’t fluffy or sweet or cute. He’s manipulative, abusive, and cruel. That’s the point of the episodes he was in. Look back at “Tall Tales,” you can say these people were getting their “just desserts” but who was The Trickster to lay down that judgement and to do so with murder? Yet we spend half this episode watching him deal with his PTSD while under the care of someone he abused.

Me? Well, if I were Dean Winchester I would’ve ended him on the spot. He didn’t. Instead, Dean leaves Sam to care for Gabriel and Sam does. Sam stays behind, worried about Dean and left caring for the being who mentally tortured him, all while Castiel (Misha Collins) yells at and berates Sam.

If I were Sam, I would’ve let Gabriel rot, but I’m not Sam Winchester. I’m not the one who has unbelievable empathy and the patience of a saint. Imagine being in your home, your supposed safe space, and dealing with that. Sam, though? Sam quietly and carefully begs and pleads and cajoles Gabriel, despite Castiel trying to belittle him for attempting.

In the end, the decision is made to give Gabriel his grace back to heal him. Again, because that’s who Sam Winchester is.

Meanwhile, Dean is in the AU world with Ketch, with the intention of finding Mary and Jack. Instead, he finds that world’s version of Charlie and suddenly saving her is the new mission. Look writers we get it, the AU means you can have all kinds of fun bringing back “fan favorites,” but the general audience is not the fandom, and all you’re doing is making impactful deaths utterly meaningless. In this episode, there were two characters who were long dead getting their deaths negated. In the end, this version of Charlie refuses to go back with Dean when his time runs out.

This isn’t your Charlie, Dean. She doesn’t know you, and she doesn’t care about you. And you don’t know her, you know and care about someone who wore the same face, but lived a completely different life. 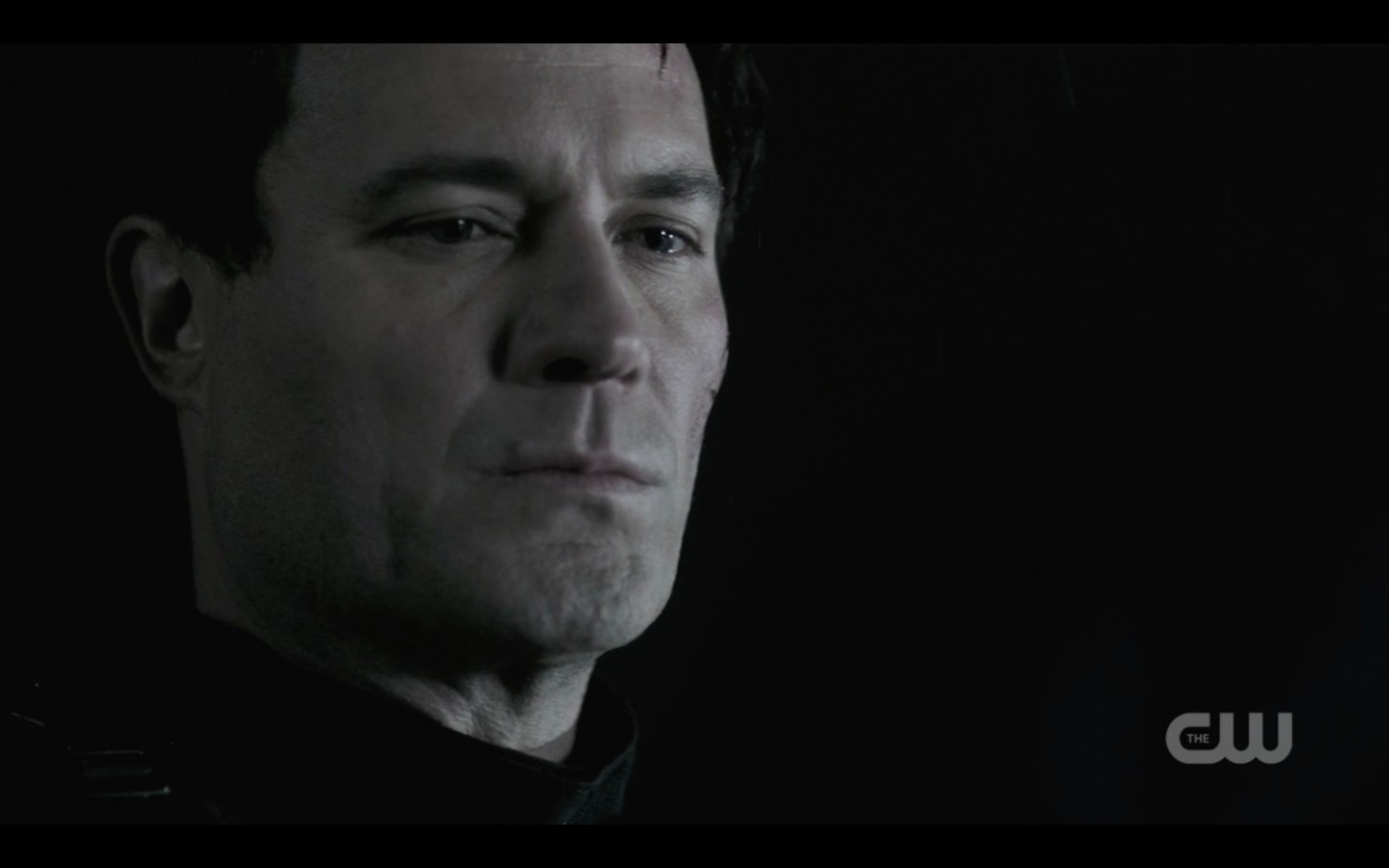 As for Ketch, this part of the plot was basically designed to redeem Ketch. Because why not redeem yet another garbage white dude character? Supernatural, I’ve defended you for a long, long time. I’ve always said, “well, this show does what it says on the tin,” but good lord, Ketch, Gabriel, Lucifer, this show does nothing but take its villains and castrate them.

Anyway, the saving Mary and Jack mission was a complete waste of time. The AU portal only stays open for a day, and Dean decided to scrap finding Mary and Jack in favor of saving not-his-Charlie.

When he gets back home, he yells at Sam for fixing Gabriel and letting him go. And on the one hand, I don’t blame Dean; I’d be frustrated, too. On the other hand, you wasted your whole day going off-script, and if Sam hadn’t given Gabriel his grace back, Gabriel couldn’t have torched Asmodeus. 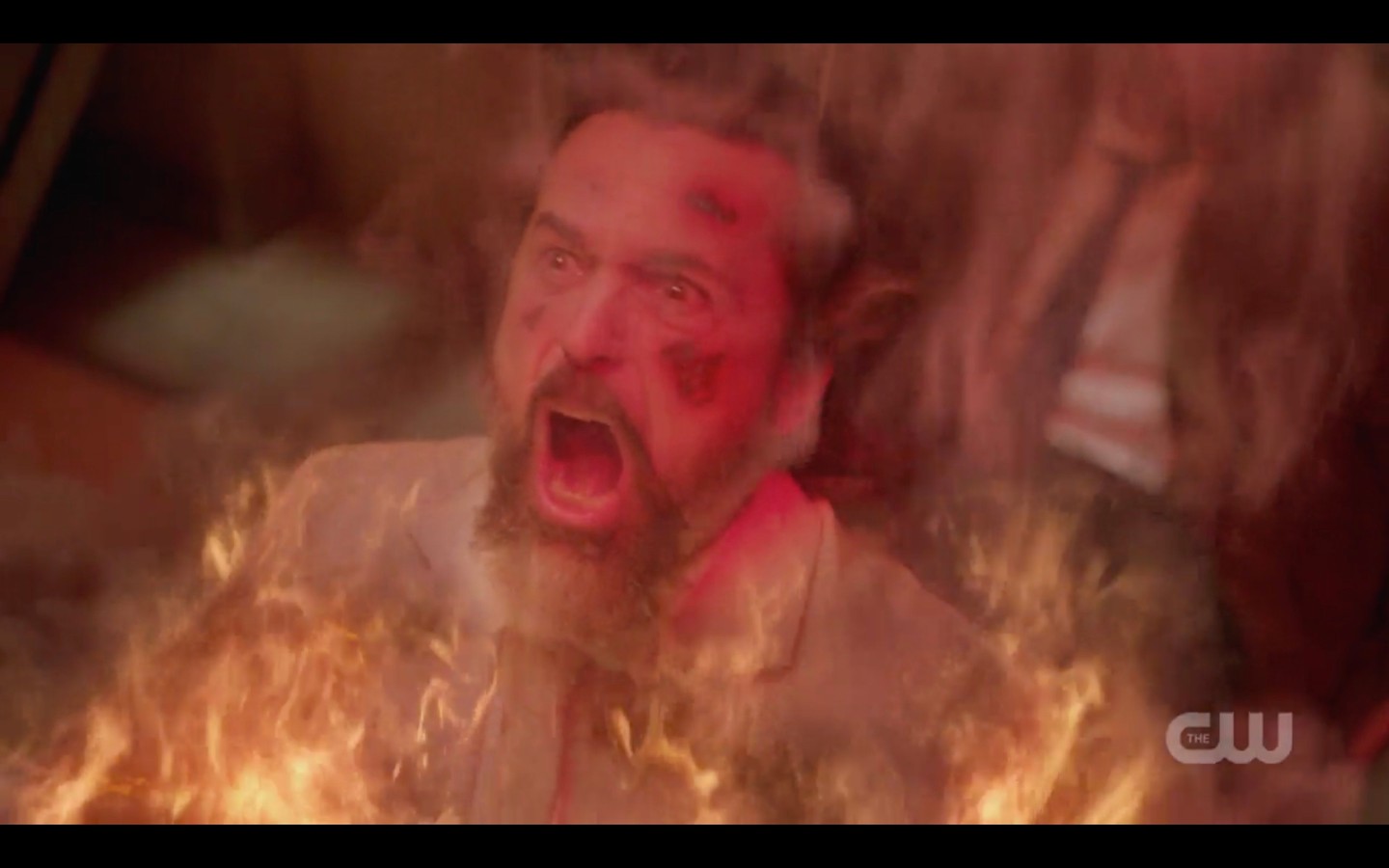 Oh yeah, Gabe defeated Asmodeus. What a useless character and the most anti-climatic culmination ever. We lost Crowley for THAT? And no, I’m not lowering myself to make any KFC jokes. Low hanging fruit, man.

So yeah, after having to nurse his abuser back to health and almost getting killed, Sam gets the pleasure of being yelled at by Dean. Look, I’ve rewatched that scene about four times trying hard as I can to feel empathy for Dean, and y’all… I can’t. I want to be able to understand his frustration and aggravation, but the writers and director did him dirty in that moment. All I can see is Sam’s flinch as Dean blows up. Lucifer is free, Gabriel is free, Mary is gone, Jack is gone. And the one person that Sam should be able to turn to is raging at him. Not cool, writers, not cool. 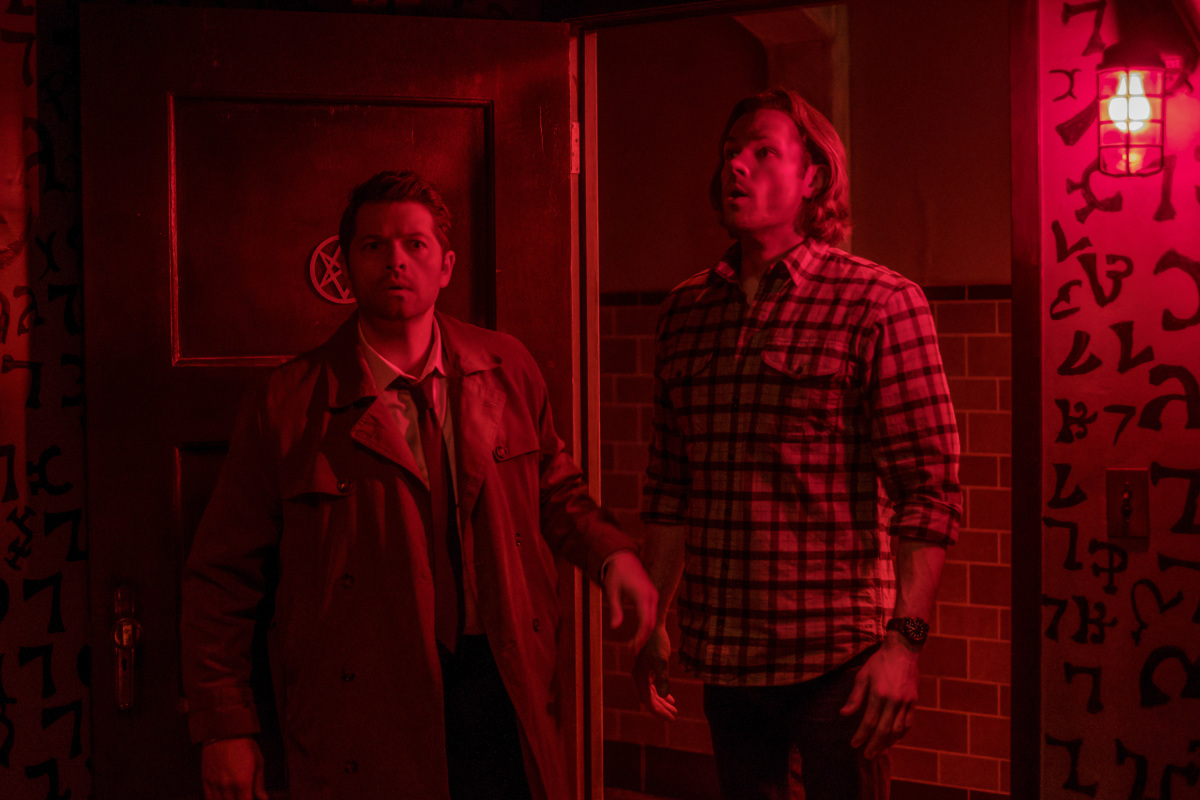 So we move on to the next episode, “Funeralia.” Which after an absurd, but arguably fun scene with Rowena, we move onto Dean once again putting Sam down. This is super fun, y’all. I love watching Dean be concerned or obliging to everyone but his brother.

Castiel decides to ask the angels in heaven for help. A redundant storyline, party of Cas. We’re treated to a rip off of “Dogma”, which honestly I thought we were done being derivative of that movie (which is nearly perfect, thank you very much, and should be on Netflix or Hulu or Amazon Prime, but isn’t and frankly, I’m upset about that, but I digress), but apparently not. Castiel bargains with some angels, they agree to a deal, we get a montage of him waiting around that feels vaguely like an episode of Doctor Who circa 10th Doctor, and then… ah, another bland character we thought was dead, but surprise!

In theory, Naomi should’ve been fun, but she wasn’t, and her return is equally a non-event. Apparently, no one, especially angels really die on this show. Except, wait, they do, and now there are only nine left and as a result Heaven can’t pay its electric bill and for some reason we’re going to ignore 1) that Castiel committed mass genocide of his own brethren, thus diminishing their numbers and 2) correct me if I’m wrong, which is fully possible, because sometimes angel politics makes me zone out, but human souls power Heaven, not angels.

Meanwhile, the brothers have tracked down Rowena who is killing of Big Pharma crooks so she can get Billie’s attention via the other reapers. She gives Sam and Dean a sob story about Crowley and Dean gives her the “what’s dead should stay dead” speech and she’s like, oh except you two, you’re the only ones who get to defy death and then my eyes rolled onto the floor at the absolute damned irony. Nearly every character we’ve seen for two episodes straight was dead at one point, not to mention Mary and Lucifer and Bobby and oh, whatever. Look, I may not like this rah-rah-bring-them-all-back nonsense, but if you’re gonna do it, have some self-awareness about your dialogue. 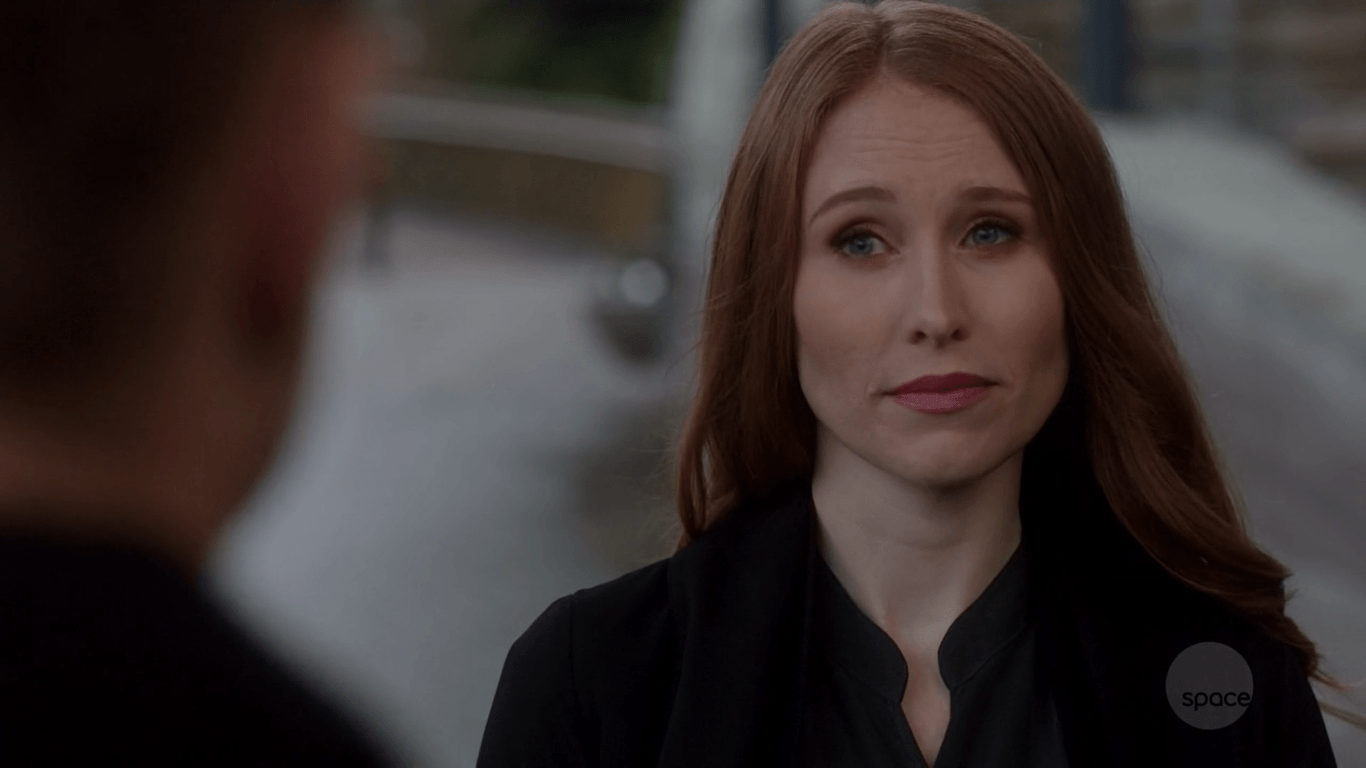 Side note: Jessica the Reaper is super annoying. I miss Tessa. Oh, yeah, the current showrunner killed her off back when he was a staff writer.

So Rowena captures Sam, that gets Billie’s attention, Rowena threatens Sam’s life, Billie say “go for it, I super don’t care,” but Rowena can’t go through with killing Sam, Dean barrels in, Billie bails, and then… Sam asks Dean and Rowena how they are. Pop quiz! Who asks Sam how he is? If you guessed “nobody, like, EVER” go grab yourself a cookie, you earned it! 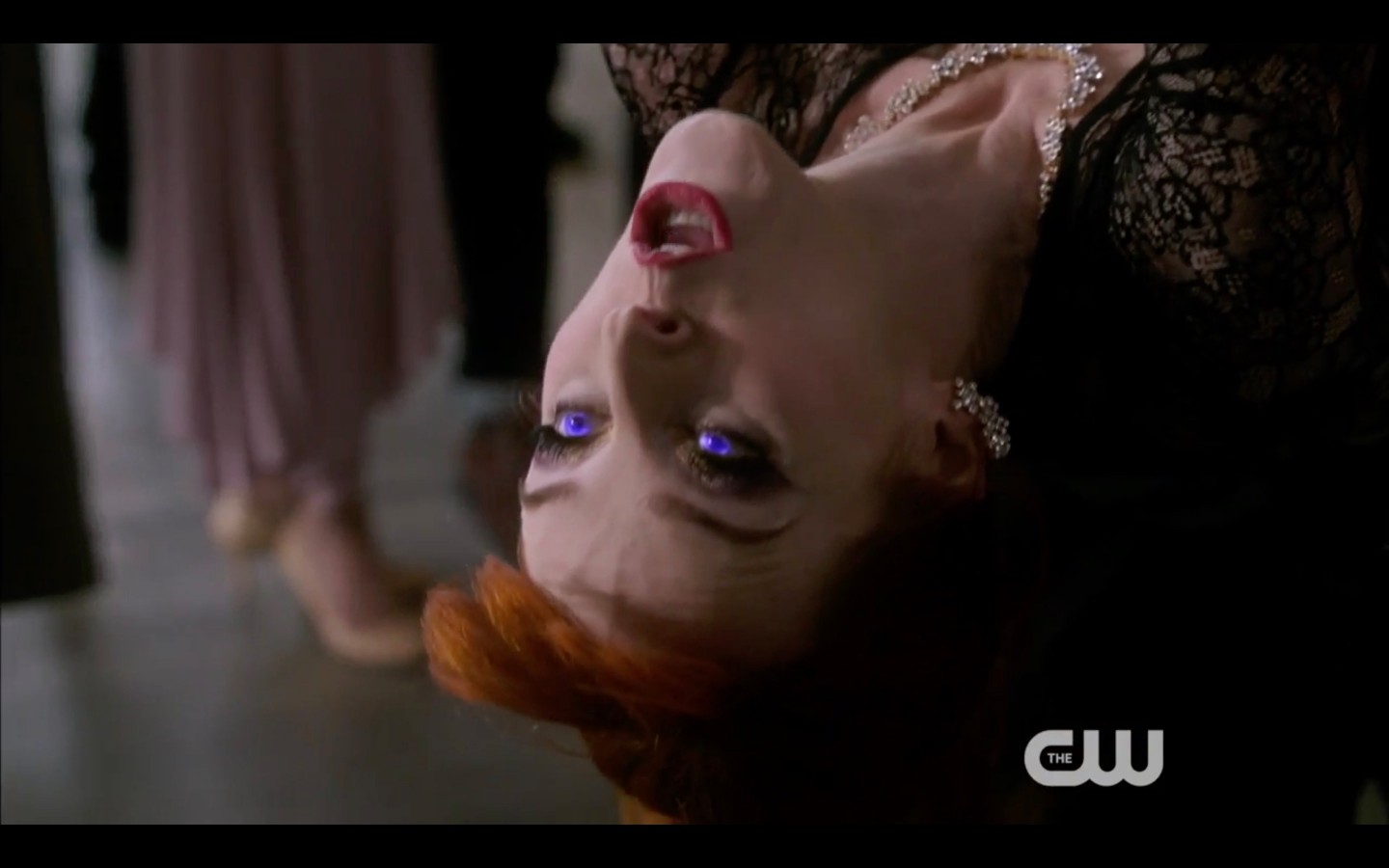 That said, Ruth Connell is always a delight to watch, and she steals every episode she’s in. As exhausted as I am by the redemption of villains, I have to say; I show my hypocrisy when it comes to her. I was upset when she “died” and happy to see her return. She’s a refreshing foil, and I won’t lie, it’s nice to see a character be focused on Sam for once. 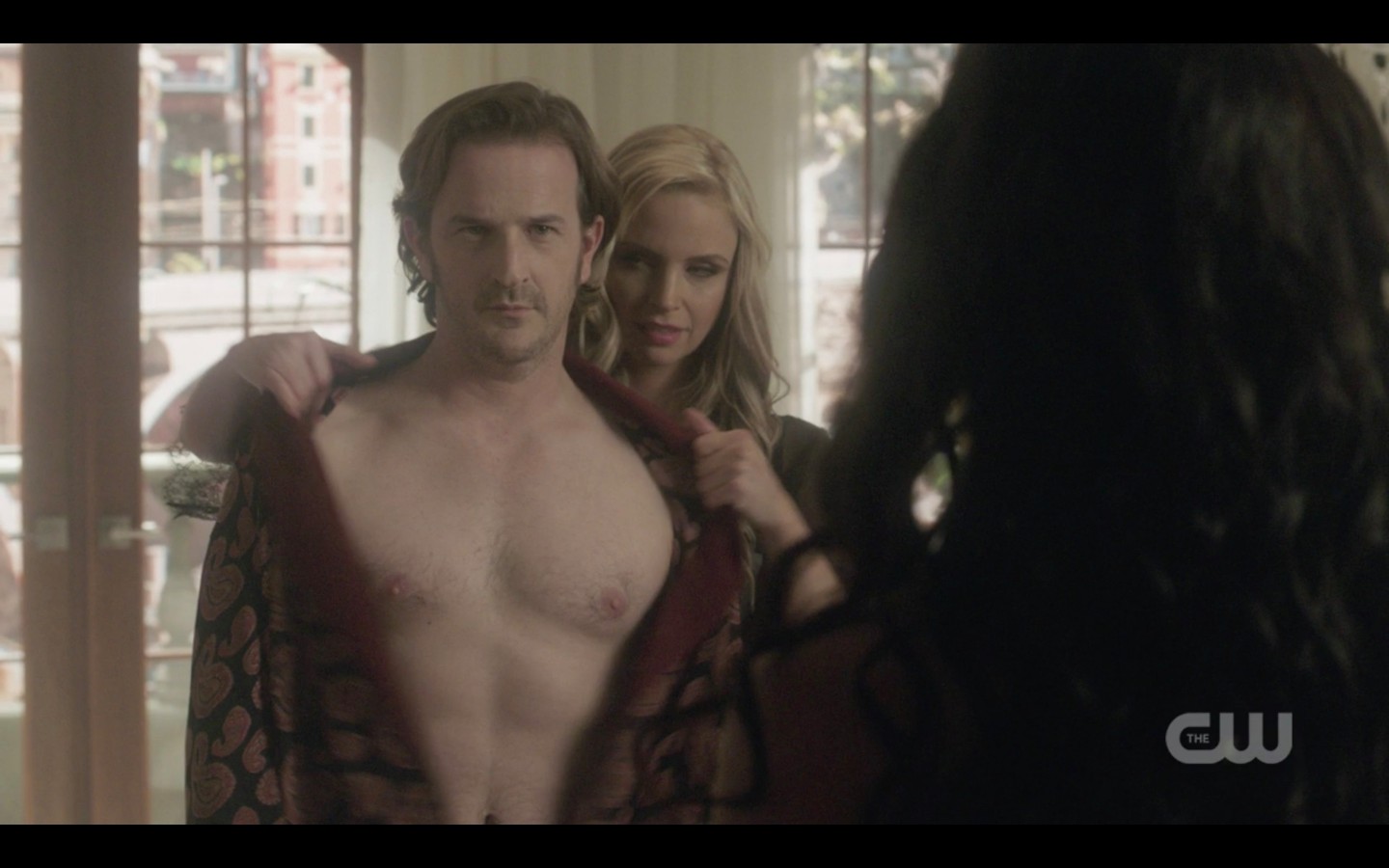 And finally, we come to the most recent episode and… sigh. “Unfinished Business” was directed by Richard Speight, Jr. It also, despite the opening credits, starred Richard Speight, Jr. playing against Richard Speight, Jr. A friend of mine called it “Dickception.” I called it an actual bag of Dicks. I clearly don’t like Gabriel, we’ve been over that. I like him even less when he’s whining to Sam and Dean Winchester about how Lucifer tortured him.

As if they have no idea what torture is like! Give me a break. And the whole, I’m Gabriel, that’s Loki, don’t blame me for what he’s done! The thing was not only contrived, but a huge, and unnecessary, borking of canon. But, hey, I get it, the bad guy had to get his revenge, no, totally he should, yup. And once again, we are treated to Sam Winchester asking someone else how they are.

The episode ends with Sam standing up for himself and Dean explaining that his John Winchester impression has all been due to him trying to keep Sam safe. Sam, to his credit and unlike me, doesn’t scoff and cough-mutter “bullshit” under his breath. That might just be because The CW is network TV, though. Sam’s speech to Dean about how he’s got Dean’s back and that if they win, they win together, and if they die, well, they do that together, too was the balm my brother loving soul needed. Add in Dean’s little grin after that, and yeah, I’m a cheap date, and all my anger dampened. 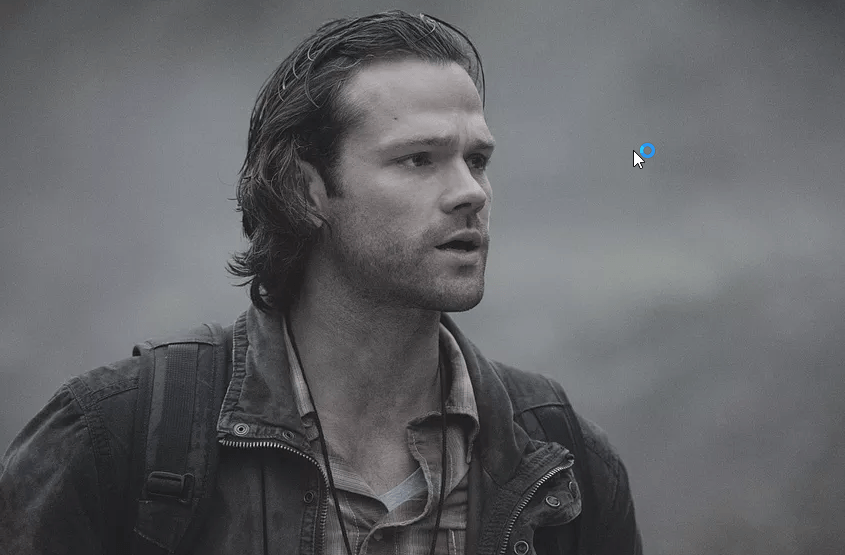 That said, I’m no fool, and I know foreshadowing when I see it. So happy birthday, Sam Winchester. The next episode airs the day after you turn 35 and I’m fairly certain there’s no surprise party full of friends and family in the works for you. You can also compare with Lynn’s reviews to see who you agree with most here.