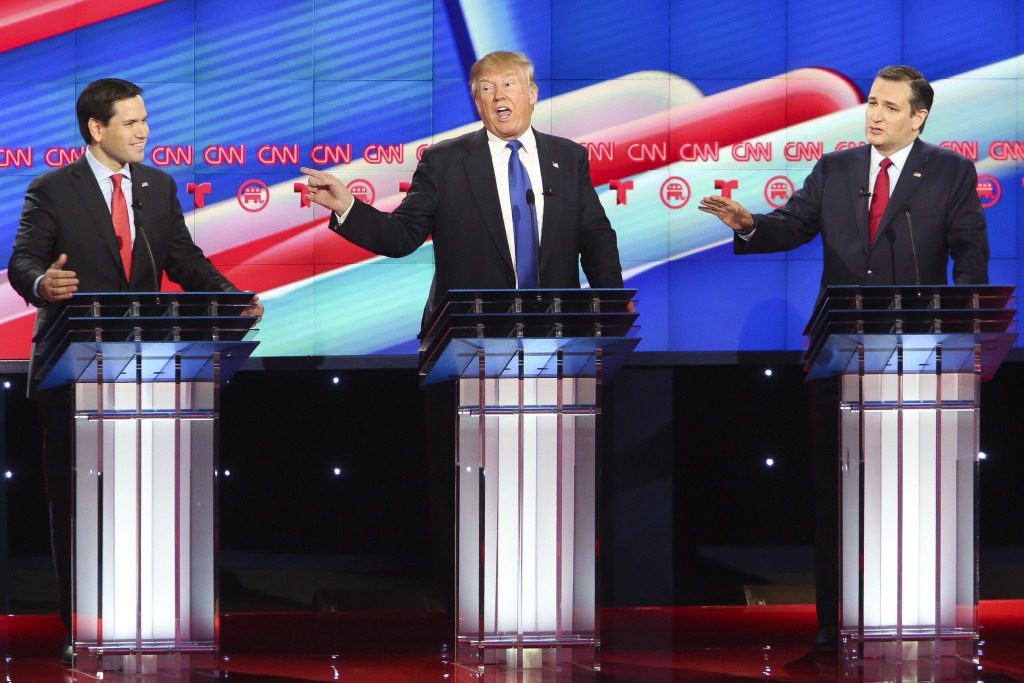 Super Tuesday is nearly here and 2016 Republican Presidential candidate Donald Trump is determined to have it live up to its name. The Republican party is circling the wagons trying to figure out what to do with the brash wild card Trump.

A boisterous debate unfolded on Feb. 25 in Houston, when the remaining five Republican presidential candidates met for the last time before Super Tuesday. In a reflection of the narrowing field within the GOP, businessman Donald Trump, Florida Sen. Marco Rubio and Texas Sen. Ted Cruz went after each other aggressively during a two-plus-hour debate co-hosted by CNN and Telemundo.

Almost immediately, Rubio and Trump locked horns over immigration, which took up most of the first hour of the debate, held in a state with a significant Latino population. According to tallies collected by our friends at Inside Gov, queries about immigration comprised 24.4 percent of the questions posed by moderators.

Rubio challenged Trump about a decades-old lawsuit involving payment of undocumented Polish laborers who worked on a demolition project for Trump Towers. Trump countered that the accusation that he paid $1 million for the lawsuit was “totally wrong.” According to PolitiFact, Trump worked with a contractor who hired the Polish laborers, and Trump maintained he didn’t know about their undocumented status. After a long legal battle, Trump settled out of court for an undisclosed amount.

Immediately after that exchange, Cruz answered another question about immigration, using his time to level an attack at Trump. Cruz said he found it “amazing that Donald believes that he is the one who discovered the issue of illegal immigration.” Trump has made immigration a cornerstone of his campaign, talking extensively about the subject during his announcement last June. “In 2013, when I was leading the fight against the Gang of Eight amnesty bill, where was Donald?” Cruz asked. “He was firing Dennis Rodman on ‘Celebrity Apprentice.’”

Trump, who has run as an anti-establishment candidate, then tried to ding Cruz on his outsider status in Washington. Trump said “you should be ashamed of yourself” because Cruz doesn’t have an endorsement from any of his Senate colleagues.

Bookending these interactions were two instances of “crosstalk,” debate-lingo for when multiple candidates speak over each other at the same time. While many debates so far this cycle have featured intense back-and-forth between candidates, Thursday’s matchup featured a whopping 30 instances of crosstalk, according to a transcript.

Overall, Trump logged the most talk time during the debate, speaking for almost 33 minutes in total. Cruz and Rubio talked for about 20 minutes and 18 minutes, respectively.

The talk-time split visualized above reflects the general state of the race, with Trump holding a significant lead and Cruz and Rubio duking it out for second place. In the most recent contests in South Carolina and Nevada, Trump beat the two senators by double-digit margins.

As the now longtime Republican frontrunner, Trump has been at the center of many of the cycle’s more spirited interactions during debates. According to InsideGov data, Trump has talked for a total of two hours and 28 minutes in the nine debates where he’s participated. There have been 10 total Republican debates, but Trump skipped the Fox News debate a few days before the Iowa caucuses. Despite that miss, Trump has still had the most speaking time of his fellow candidates.

After two primaries and two caucuses, Trump has amassed 82 delegates, far outpacing his fellow GOPers. But with 1,237 total delegates needed to secure the nomination, all eyes are on Super Tuesday, when another 595 Republican delegates are up for grabs. On March 1, Republican voters go to the polls in Alabama, Alaska, Arkansas, Georgia, Massachusetts, Minnesota, Oklahoma, Tennessee, Texas, Vermont and Virginia.

More: Why Donald Trump Is Sticking Around for the Long Haul