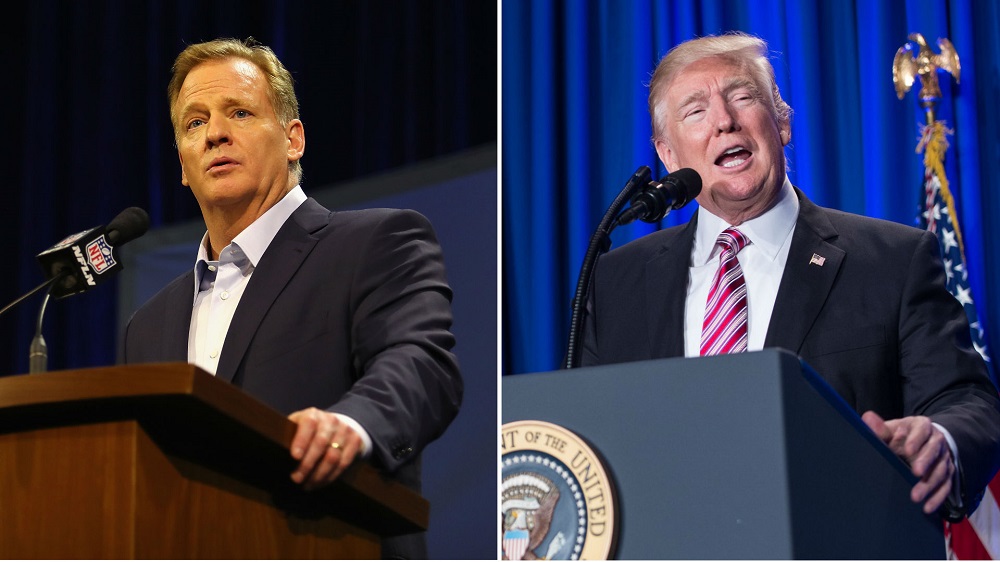 During Super Bowl Media Week, reporters from all over had access to members of both the Atlanta Falcons and New England Patriots, asking any questions their little hearts desired. While much of the conversations remained focused on the upcoming game, people were curious what the players and coaches had to say about President Donald Trump and NFL commissioner Roger Goodell.

Trump, of course, is just a controversial figure. And with Patriots owner Robert Kraft, head coach Bill Belichick, and quarterback Tom Brady all being friends with Trump, reporters want to ask their position on the President’s controversial moves.

“I’m not talking politics at all,” said Brady when asked about the President. “I just want to focus on the positive aspects of this game and my teammates and the reasons why we’re here.”

Belichick, in typical Belichick fashion, responded similarly: “I’m focused on our team and for getting for Sunday.”

The Goodell questions run a little deeper. Goodell was at the center of the “Deflategate” nonsense after Brady cheated in the AFC Championship Game a few years back. The commissioner suspended Brady for the first four games of the 2016 NFL season, and if the Patriots win Super Bowl LI, Goodell would have to stand on the stage postgame and hand Brady the Lombardi Trophy.

“I’m not worried about the postgame or anything like that,” said Brady when asked if receiving the Trophy from Goodell would be awkward at all. “I just want to go out there and do great during the game.”

Here’s where things get interesting, though: the official transcripts of the interviews with 28 Falcons players and coaches and 26 Patriots players and coaches released by the league offer no mention of “Trump.” In fact, the word “President” only appears once, and it is in reference to the team president, not The Donald. “Goodell,” similarly, appears only once in the transcripts.

So, what’s going on? Is the NFL censoring the media in an effort to keep the conversation on football? This isn’t the first time the league’s transcript has been watered down. The quotes from Super Bowl XLIX cut out a lot of what Seattle Seahawks cornerback Richard Sherman had to say about the Patriots owner, the NFL commissioner, and Baltimore Ravens running back Ray Rice. Sherman, an outspoken character, hit on a lot of points the NFL would rather people forget.

In the NFL, it’s important to remember that the game is a team sport. The culture in the NFL right now is that players should put the team first and try to stay out of controversial topics off the field. Of course, players like San Francisco 49ers quarterback Colin Kaepernick have challenged that notion in the past year. The NFL didn’t like that because it may have contributed to the ratings slump this season.

“Just really stay out the social media world because you kind of get sucked into it,” said Falcons linebacker De’Vondre Campbell when asked how he remains focused on football with “everything going on in our society today.”

“You can kind of start believing in some of the stuff you see,” continued Campbell. “So I stay in my own little world, and I do what I need to do and just try to stay out of everybody else’s business, to be honest.”

Then, there’s the new travel ban brought about by Trump’s executive order suspending the refuge programs in seven Muslim-majority countries. An issue Falcons receiver Mohamed Sanu, the only player of Muslim faith in Super Bowl LI, couldn’t avoid in the interviews. Even Sanu bit his tongue when speaking on the non-football topic.

“It’s a very tough situation, and I just pray that us as a country and a world can be united as one,” said Sanu. “It’s really hard for me to talk about this right now. It would take a lot of time, so I just want to focus on the game and focus on football.”

Sanu’s quote was not included in the league’s official transcript.

Why does the NFL want to steer away from the big talking points? The NBA has encouraged its players to take a stance over the past few years under Commissioner Adam Silver, especially regarding things such as police brutality and L.G.B.T.Q. rights. Stars like LeBron James and Carmelo Anthony have made their opinions well known.

NFL players have plenty of opinions. There are also far more players in the NFL than the NBA. The difference is, in many cases, football players don’t seem to be as willing to speak out, especially the superstars. But there are a handful, much like Kaep, more than willing to speak their mind. Pats tight end Martellus Bennett, like his brother Seahawks defensive end Michael Bennett, has never been afraid to speak his mind.

“Most likely not,” said Bennett, when asked if he would visit the White House, should the Pats win Sunday. “Because I don’t support the person in it.”

The reasoning is two-fold. The NFL is the undisputed king of sports in the United States. They have well over 50 percent of the market. They don’t see the need to foster controversy because they’re already No. 1. The NBA, by comparison, is still constantly looking to make headlines as it continues to grow in popularity both domestically and internationally.

Second, the NFL wants to see its ratings bounce back after a disappointing season, caused in part by controversy. The league believes that a combination of Donald Trump, the 2016 Presidential Election, and Colin Kaepernick resulted in an average eight percent drop in viewership among all games.

I believe you could throw Goodell and his stupid buzzkill rules in there, although the league would never admit that. There’s no other reason for them to scratch mentions of his name (unless he called for it himself, which is also possible). Of course, it’s hard to censor in 2017 with a camera on every phone.

But, hey. The NFL would rather try and keep you in the dark.