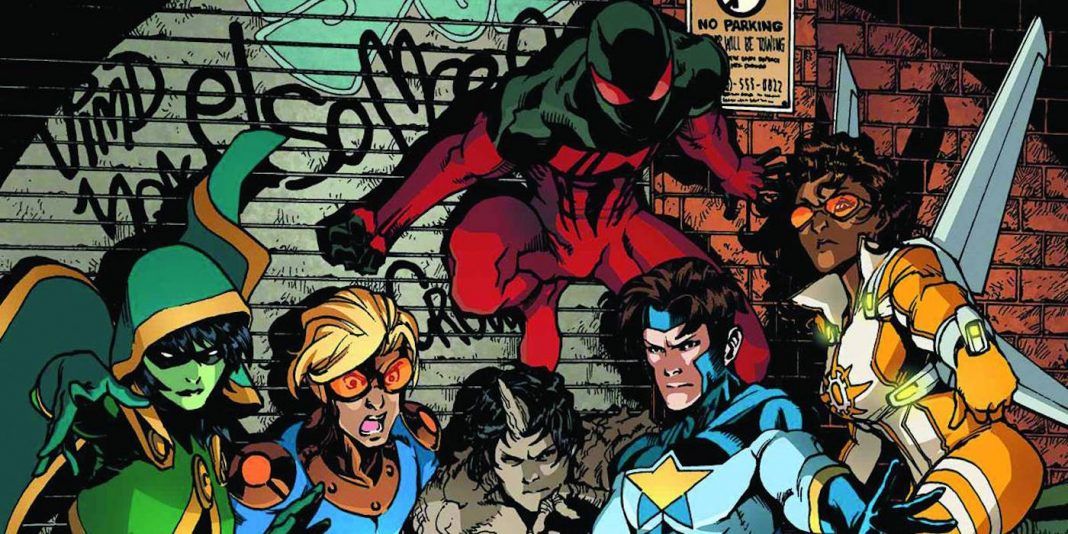 One Step Closer to New Warriors

The New Warriors was a cool 90s comic book, but financial limitations kept me from collecting past Ghost Rider books and X-Men. The New Warriors then was Marvel’s answer to Teen Titans with the roster of heroes like Firestar, Night Thrasher, Rage, Turbo, Speedball, Marvel Boy, Namorita and Nova. In the 2000s, the New Warriors were later relegated to D-listers acting as heroes for a reality show that unfortunately made them instrumental to Marvel’s first Civil War storyline.

Freeform will be producing a TV series for the team, but this time around, the team will be top-billed by Squirrel Girl. The other members will include Night Thrasher, Speedball, Microbe, Mister Immortal, and Debrii. Freeform is one step closer to realizing New Warriors after finding its Squirrel Girl in actress Milana Vayntrub (This Is Us, Other Space). Apart from Milana Vayntrub, other candidates for Squirrel Girl include Shannon Purser (Barb) from Netflix’s Stranger Things (still feel sorry for Barb) and Anna Kendrick. Squirrel Girl is a light-hearted hero who can communicate with squirrels, is athletic and share some abilities with the eponymous rodent. If you want to be familiar with Squirrel Girl onscreen, she’s featured in Disney’s Ultimate Spider-Man.

The New Warriors comic was kind of serious but the TV series will be a comedy but unlike DC’s’ Powerless. Since the series is produced by Freeform, hopefully, it would crossover with another upcoming series Cloak and Dagger. Both heroes have crossed paths with the New Warriors and Dagger used to be part of the roster. Unfortunately, the web is currently dry for news on Cloak and Dagger.

“I am thrilled beyond belief to be working with this incredible group of actors. They are funny, sincere, eager, charming and perfectly embody these characters. It’ll be a blast and an honor to create this show with each of them,”

The Incredible Hulk has been showing on HBO lately perhaps to put viewers up to speed leading into Thor: Ragnarok. It’s not a popular MCU film, heck, like Spider-Man: Homecoming, it’s not 100 percent MCU as Hulk’s solo film rights remain with Universal. But it’s fun seeing Edward Norton play as Bruce Banner and his more familiar love interest Betty Ross played by Liv Tyler. I sit through this one whenever I catch it and hope that their partnership would somehow be rekindled instead of the awkward #Brucenat ship they have going on.

Here I am trying to come up with a convincing plot of Samuel Sterns’ (The Leader) return, the re-emergence of Betty Ross as Red She-Hulk and why the respectful General Ross, enforcer of the Sokovia accords would become the Red Hulk after the events of Infinity War as well as the return of Abomination. Abomination was supposed to return as part of the Avengers Initiative as proposed by the World Security Council to Ross which led to the Marvel One-shot, The Consultant and that post-credit scene between Ross and Stark.

Unfortunately, there seems to be no plans by Marvel to bring the Abomination character back as lamented by actor Tim Roth who played the role.

“I don’t think Marvel will ever use me again, but it would be fun.”

I’m thinking, should the Hulk get another film, it would turn out to be a hulkfest with The Leader as the main villain, making Hulks of everyone as a loose adaptation of Fall of the Hulks storyline. The Abomination will be at the start and dying in the middle of the film with Banner going toe to toe with Red Hulk Ross at the end. My two cents.

SHIELD to Return to the Big Screen

Marvel’s Agents of SHIELD Season 4 ended on a high note but again putting the agency back in the shadows despite getting back into the mainstream in the middle of the season. But recent news from Screenrant would indicate that SHIELD, in some form, would be back on the big screen in the form of Agent Jimmy Woo for the Ant-Man sequel, Ant-Man, and the Wasp.

Jimmy Woo is actually one of Marvel’s oldest SHIELD characters in the comics way back in the fifties fighting the likes of the Mandarin-like villain Yellow Claw as an allegory to the US fight against communism. Jimmy Woo may actually be the prototype for Agent Phil Coulson as he was instrumental in bringing together a 50s incarnation of the Avengers. Whether this version of Agent Jimmy Woo is actually part of SHIELD remains to be seen but if so, this could affect Marvel’s TV series. The TV Universe and the Cinematic universe might end up connected after all as Kevin Feige seems to be more open to compromise if we’re to take from SONY’s Amy Pascal’s “adjunct spider-verse” interview. This comes along with another rumor that SHIELD director Nick Fury will play a big part in the upcoming Captain Marvel film. Carol Danvers, however, is more associated with the agency SWORD, which could mean that Director Fury could be head of the agency. Pure speculation at this point but one can hope. Jimmy Woo will be played by Randall Park from Fresh off the Boat.