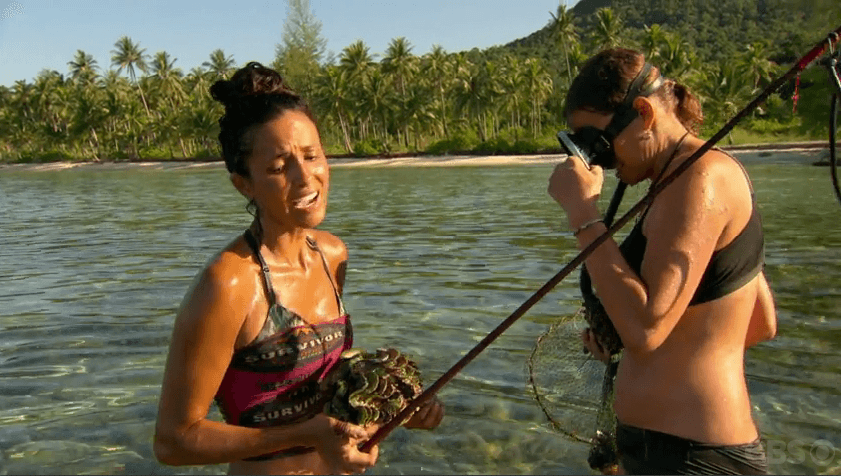 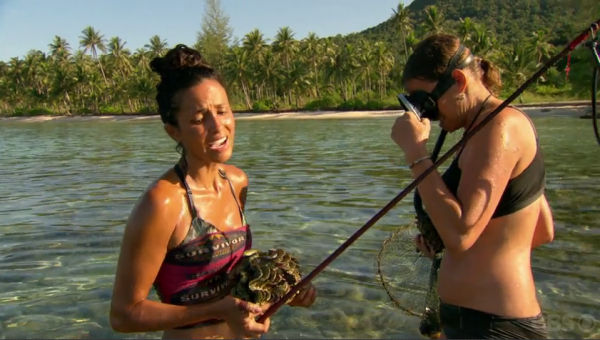 It’s a major blindside on this episode of “Survivor: Second Chance.” At the Angkor camp Abi said she didn’t like feeling that she owed people anything. Monica commented that crabbing was something she and the others like to do. Kimmi said she wanted to eat all the clams she found in the water. Monica told Kimmi she was depleting the ocean by taking so many clams. Kimmi said if Monica is her biggest problem in the game she is doing OK. She said she wasn’t used to getting unwelcome opinions.

For this week’s rewards challenge, 3 members from each tribe were tied together to roll a barrel with another tribe member in it. They had to chase balls along the way and get those six balls into six holes; the first two tribes to find them all would get a reward. The first place tribe would get comfortable chairs, pillows, blankets and a tarp to use at camp, as well as refreshments. The second-place tribe would only get a tarp.  Ta Keo was the first place tribe, and Angkor was the second place tribe.

Back at camp, the Ta Keo the enjoyed fresh fruit and talked about catching fish to go with the fruit. Keith said he didn’t hook up with his fellow tribe members last time, but this time was different. Spencer said it seemed like their tribe kept winning immunity but losing rewards challenges. Spencer said he watched the guys fish last time, but he never did those things with them because he felt like he was an awkward geek. He said now he felt like he was living the Survivor dream.

Woo said the victory for Angkor was great for them. He said he was using his mom as inspiration to push forward in the game. He explained his mom had died despite a heart transplant. Woo said he was playing the game for her and for everyone who voted for him to get a second chance. Abi said Woo was using his mom story so get people to work with him and get along with him. Tasha said Woo and Abi were like night and day and that it took everything in her just to be around Abi, but Woo took orders easily. Tasha called Abi a time bomb but said she had kept her in the game.

For this week’s immunity challenge, the tribes had to go through a series of obstacles to the top of a tower where they had to launch bean bags and hit their targets. Angkor and Ta Keo both won the challenge. Spencer said it was between him and Wigglesworth as to who would be going home this week.

Jeremy was trying to decide whether to trust Jeremy or Wigglesworth. Spencer said he was used to being on the bottom of the tribe. He also said he wanted to make sure voting off Wigglesworth was the plan for that night at Tribal Council.

Monica said it might benefit her game to keep Wigglesworth in the game. Jeremy questioned Monica’s actions in the game. Stephen said if they took out Monica it could screw up the trust they had for each other.

That night at Tribal Council Stephen said this game is based on trust, but you have no way of knowing when to trust. Wigglesworth said her actions would hopefully keep her in the game. Spencer said that he had a unified tribe for the first time. Jeremy said Kelly was loyal and worked hard for the tribe. Monica said she thought tonight’s vote was locked in. Kimmi said it stinks to squash someone else’s hopes and dreams. Stephen said strategy is based on emotions and bonds were needed to form alliances. The tribe then cast their votes, and Jeff Probst tallied them and announced that Monica was voted out.