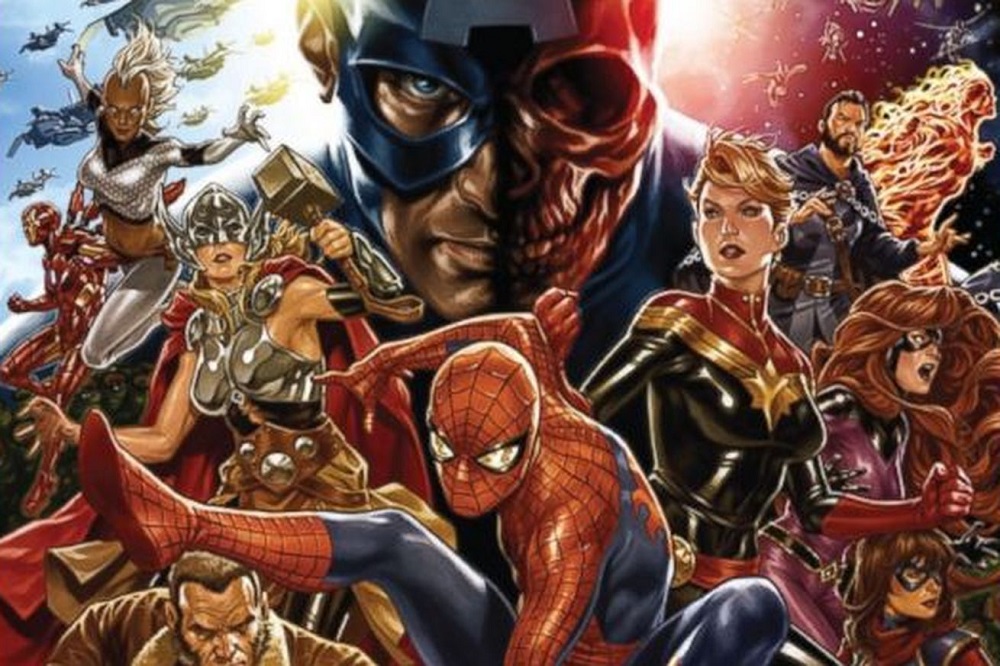 “Gone are the days of the man in a bandit mask stealing a ruby from a museum. Now it’s all just supervillains trying to destroy the Earth, superheroes fighting one another for vaguely defined reasons…”

What will you do if you have a roster of superheroes to fill two armies? You make them fight each other of course. It seems like it’s all they do nowadays, especially at Marvel comics. In Marvel comics, they had the first Civil War event which the Captain America: Civil War film was loosely based on, and now they have Civil War II, which was somewhat a cash grab at the Civil War film but with a different story. Then, there’s Secret Invasion where, while technically it was hero vs. hero, except the other side was a bunch of alien impostors. In DC, they have an alternate universe story called Injustice where one universe’s corrupt Justice League fights against the mainstream universe’s Justice League. They also had the great alternate universe story called Kingdom Come where the old DC heroes fight an amoral younger generation of so-called heroes. Usually, it’s all about politics and for the past decade, it’s about heroes fighting heroes or heroes fighting universal omnipotent menaces that are way out of their league. Now in comic sales, DC has recently beaten Marvel for the first time in years with its DC Rebirth program which has been churning out refreshing and interesting stories with more adventure and character development while Marvel’s characters have been mired or dragged into endless political battles that have been boring some of their readers.

For the past years, Marvel has given its readers Civil War which put Captain America at odds with Iron Man and severely split the superhero community. They also came up with Avengers vs. X-Men or AvX which put the X-Men at odds with the Avengers because of the impending arrival of the Phoenix Force. Then we have Civil War II where this time, it’s Team Iron Man vs. Team Captain Marvel because of a precognitive Inhuman to be used in implementing a Minority Report-like law enforcement system. Speaking of Inhumans, Marvel also has IvX or Inhuman vs. X-Men. It’s hero versus hero story after hero versus hero story and about politics. Like I’ve often said, when people come together in a group, politics is there to break them up.

Many fans also don’t like the direction Marvel has been going with regards to diversity, political correctness and social justice like putting Tony Stark’s Iron Man out of commission and replacing him with a young African-American female. Many fans also dislike the Thor mantle going to Jane Foster. Ms. Marvel is now an Inhuman Pakistani Muslim girl. Ghost Rider is now a Latino kid named Robbie Reyes from Los Angeles instead of a nomadic Caucasian Johnny Blaze or New Yorker Danny Ketch. There’s talk of a Spider-Man movie with Miles Morales in the title role. Marvel has also given Hulk’s powers to young Korean genius Amadeus Cho and is in the process of gender-bending angry Hulk by giving that aspect of the Hulk to formerly easy-going She-Hulk. Oh and they killed Bruce Banner in the comics, so the guy we know as the Hulk on TV and film is gone. The Hulk is now that kid in the Iron Spider costume in Disney’s Ultimate Spider-Man cartoon. They might go with that angle soon since we’ve already seen the kid’s supposed mother on film in Avengers: Age of Ultron. We’re not being racist here, but many fans think that Marvel may be overdoing the hero replacement thing for the sake of social justice and diversity and changing well-established and loved heroes for the sake of change. The Marvel universe is already filled with interesting, diverse characters that can be highlighted and not shuffled into established roles such as Black Panther, the mutants Storm, Dust and Sunfire, Misty Knight, Shang-Chi, Coleen Wing and Luke Cage. Some think that Marvel’s efforts run counter to popularizing their comics from the success of the films. Anyone new to comics who jumps into the current issue of Avengers will not recognize the current team. A commenter on YouTube (or was that on Yahoo?) said that it was like going to a favorite restaurant that served steak and burgers and finding out the next day that everything on the menu is vegan.

Elsewhere, for the past few years, the X-Men are busier with self-preservation than they are with saving the world. For years, the X-Men and mutants have played the metaphor for social/racial inequality but when the US reached a period wherein social and racial inequality somewhat reached an acceptable balance, that aspect of the X-Men stories no longer sold as much and the mutants ended up getting decimated from millions to a few hundred. The X-Men and many remaining mutants ended up walling themselves in their own state or island called Utopia rendering their fight for equality moot. Charles Xavier has become somewhat irrelevant, compared to a radicalized Cyclops with his current wife and former radical Emma Frost, shadowed by the now heroic Magneto. The Cyclops that we knew is now gone and replaced by his younger self from the past. It’s a bit out there even if you’re into comics.

There’s also inter-industry politics involved with the X-Men and the Fantastic Four. Disney and Marvel Comics have gone out of their way to put the X-Men on the sidelines and completely cancel the Fantastic Four because Twentieth Century Fox wouldn’t give back the X-Men and FF franchises back to Marvel so decent films can be done for them. Therefore, Marvel can’t afford to promote those properties any further than they have to. In the late 80s and 90s, the X-Men were more popular than the Avengers and practically have their own universe. A universe wherein Fox hit the jackpot if they can get their movies right.

But Marvel will not get trumped by DC in comics sales, and it seems that they’ve woken up from a long sleep. While their hero vs. hero stories were interesting such as Civil War I, Marvel Zombies (love it) and AvX, people miss their heroes doing heroic stuff. Marvel says no more as they announced that they’re temporarily putting a stop on politics in their comics and focus on hero vs. villain adventures and character building. There is one last hero versus hero story, and that’s Captain America’s Secret Empire. You know, that comics frame which took the world by surprise when he said “Hail Hydra” at the height of his film popularity after Captain America: Civil War. We explained that his backstory was re-written where his ideals were changed in the past yet he’s still heroic at heart. Because we are all heroes from a certain point of view. He so believed that Hydra’s ideals were right that he still qualified for the Super Soldier serum and that his mission was so high up that he had to fight against HYDRA and The Red Skull himself who now happens to be his boss.

Sure, some Marvel’s heroes catch a bad guy or a couple of crooks in the first few pages, but it’s often a one-page side story, but there are plenty of heroes or characters in costume that aren’t seen doing that kind of thing. It’s been a while since any of the X-Men got out to catch a crook or save the day for the random person and maybe save the world without mentioning mutant rights. Batman has so far remained street level despite his billionaire status as he fights crime and stops the occasional mugging. Spider-Man does it too, but Marvel changed that as well. Now he’s more Tony Stark as he’s the head of his own company. By the way, Mary Jane is now Tony’s girlfriend, or at least when he wakes up from his coma after Civil War II.

But again, Marvel will be toning down on politics for a while. One major event of that sort is their current Monsters Unleashed storyline where Marvel’s multitude of heroes get to save the world again from seemingly random giant monsters. Save the people, save the city, catch the bad guys and fight monsters. That’s what superheroes do. Not fight each other over politics like the Sokovia Accords, the Superhuman Registration Act or some guy who can tell the future. Many folks miss that.