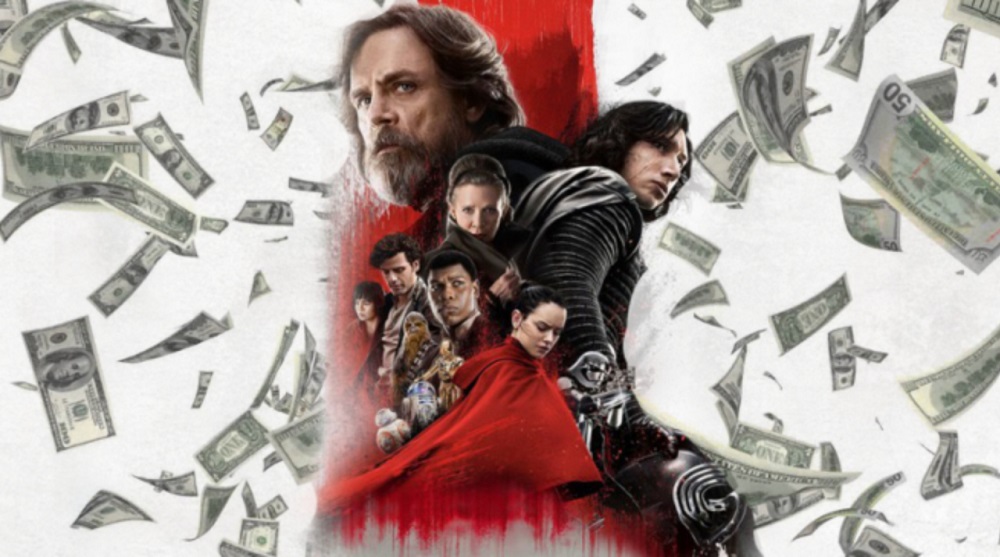 “Star Wars: The Last Jedi” might have pulled in $450 million in tickets worldwide at the box office, but it is actually the least liked of all the films in “Star Wars” eight chapters.

While critics lavished praise on “The Last Jedi” giving it a 93% on Rotten Tomatoes, audiences only gave it 56%. This makes it the least liked in the “Star Wars” franchise including “Episode 2: Clone Wars” which received 57%.

As news of Disney merging with Fox for $52.4 billion still resonates, the Mouse House proves its marketing might in freshening up the 40-year-old franchise for a new generation while still satisfying the original generation it began with.

Rian Johnson’s second installment in the third “Star Wars” trilogy rocketed to a debut of $220 million at the North American box office, according to studio estimates Sunday. That gives “The Last Jedi” the second-best opening ever, slotting in behind only its predecessor, “The Force Awakens.”

The Disney blockbuster became just the fourth film to open above $200 million domestically. Aside from “The Force Awakens” ($248.8 million), the others are “The Avengers” ($207.4 million) and “Jurassic World” ($208.8 million). Accounting for inflation, the debut of 2012′s “The Avengers” would roughly tie with “The Last Jedi.”

“The Last Jedi” is off to a similar start overseas, too, with $230 million in international ticket sales, said Disney. That brings its three-day global haul to $450 million.

“The Force Awakens” had benefited from unique circumstances. Pent-up demand was off the charts: It was the first “Star Wars” movie in 32 years with performances by fan favorites like Harrison Ford (Han Solo) and Carrie Fisher (Princess Leia). “The Force Awakens,” directed by J.J. Abrams, a star in his own right, was also the first “Star Wars” movie pushed through Walt Disney Company’s vaunted marketing system. (Disney bought Lucasfilm, the “Star Wars” studio, in 2012.)

As a result, analysts expected “The Last Jedi” to generate roughly $200 million in opening-weekend ticket sales in the United States and Canada, or about 20 percent less than its predecessor.

“We came in thinking that anything close to 200 was going to be an absolute win,” Dave Hollis, Disney’s president of theatrical distribution, said on Sunday. “The result we got is a reflection on Rian Johnson, who delivered a satisfying fan experience. Word of mouth has been enormous.” “The Last Jedi,” which cost roughly $350 million to make and market, arrived to a better-than-expected turnout even as moviegoers avoided higher-priced 3-D screenings — an ongoing trend in the movie business, especially for films that draw large family audiences. (The glasses don’t fit little faces.) The 3-D format accounted for 30 percent of ticket sales for “The Last Jedi,” according to Disney, down from 47 percent for “The Force Awakens.”

Even so, theater owners were ecstatic.

“That word actually doesn’t do it justice,” said Greg Foster, chief executive of Imax Entertainment, which played “The Last Jedi” in both 3-D and 2-D. “This shows that new ‘Star Wars’ characters are connecting with a new generation of fans. It shows that, when there is a true event movie, people want to see it on the biggest screen possible.”

Patrick Corcoran, vice president of the National Association of Theater Owners, echoed those thoughts and noted that “The Last Jedi” also benefited from improved technology in theatrical distribution, including digital presales. “It shows the flexibility of the modern digital multiplex, able to add new show times at the last minute to meet that demand,” he said.

“The Last Jedi” brought back Ms. Fisher — now playing General Leia in one of her final roles — and Mark Hamill (Luke Skywalker) but largely focused on newer characters that include the rebel fighter Rey, played by Daisy Ridley; the evil Kylo Ren (Adam Driver); and the brash pilot Poe Dameron (Oscar Isaac). Men made up 58 percent of the opening-weekend audience, Disney said, on par with “The Force Awakens.” The new film drew a larger number of children under the age of 12 and adults 17 to 25, with teenagers slightly down.

“The weekend that we’re in is a byproduct of the foresight and vision from our CEO Bob Iger to bring Lucasfilm into the fold,” said Disney distribution chief Dave Hollis, alluding to Disney’s 2012 purchase of Lucasfilm. “So as we think about the possibility of other things being added, you can’t help but be excited about the possibilities.”

Fox, as it happens, was the only studio to open another new wide-release film against “The Last Jedi.” Its family film, “Ferdinand,” was essentially stampeded by “The Last Jedi,” grossing $13.3 million. “Ferdinand” and other upcoming holiday season releases will look for more room in the coming weeks, once the “Star Wars” tsunami has waned.

While Abrams’ reboot capitalized on a decade’s hiatus for “Star Wars,” Johnson’s sequel didn’t have the same benefit of freshness. It follows not only “The Force Awakens” (which ultimately grossed $2.1 billion) but last year’s spinoff, “Rogue One.” That release opened with $155.1 million, and grossed in total little more than $1 billion globally.

Johnson, who wrote and directed, instead aimed to distinguish “The Last Jedi” by introducing some new tones to George Lucas’ space opera. “The Last Jedi” is more irreverent than previous chapters. And it has drawn plaudits for its diverse cast, including Daisy Ridley, John Boyega and newcomer Kelly Marie Tran.

“The results speak to the power of representation,” said Hollis. “The film really reflects our world and beyond. It becomes something people can see themselves in, whether they see themselves in Rey or Finn or Poe or Rose or Captain Phasma. They can relate to all those characters.”

Johnson’s approach has seemed to work. Critics gave Johnson’s film a 93 percent fresh rating on Rotten Tomatoes. Audiences endorsed it, too, with an A CinemaScore, though not all fans are on board with Johnson’s innovations. As of Sunday, “The Last Jedi” has scored a dismal 56 percent rating from some 95,000 Rotten Tomato users.

Yet the haul for “The Last Jedi” dwarfed most all releases in the two years since “The Force Awakens.” By comparison, it has in three days already bested the five-week gross of Warner Bros.′ “Justice League” ($219.5 million).

“Seeing a movie like this in the movie theater, getting the collective goosebumps and having the OMG-moments, that’s something you cannot replicate at home on the small screen,” said Paul Dergarabedian, senior media analyst for comScore. “Rian Johnson has made a movie that showcases the movie theater experience in a truly brilliant way.”

Signaling its faith in Johnson’s course for “Star Wars,” Lucasfilm earlier announced that Johnson will develop the next trilogy for the franchise, the first of which he’ll write and direct. Abrams is set to return to direct Episode IX after he was brought in to replace Colin Trevorrow. A separate spinoff centered on a young Han Solo is due out next summer.

The massive debut for “The Last Jedi” singlehandedly brightens what has been a disappointing year for Hollywood. The weekend was far and away the highest grossing of the year. According to comScore, the industry was down about 3.9 percent from last year before this weekend. Now it’s 2.9 percent off the 2016 pace. Dergarabedian estimates the year will end about 2 percent down with a little over $11 billion in ticket sales.

“The Last Jedi” may be playing the role of savior at the box office, but the news isn’t all rosy for exhibitors. Given the demand, Disney put more onerous demands on some theater owners for “The Last Jedi,” including a higher percentage — 65 percent — of ticket sales. And Disney’s acquisition of Fox is seen by analysts as a bid, in part, to strengthen the studio’s in-development streaming platform, set to debut in 2019.

Disney and Fox combined for five of the top 10 movies on the weekend and together accounted for approximately 90 percent of ticket sales.