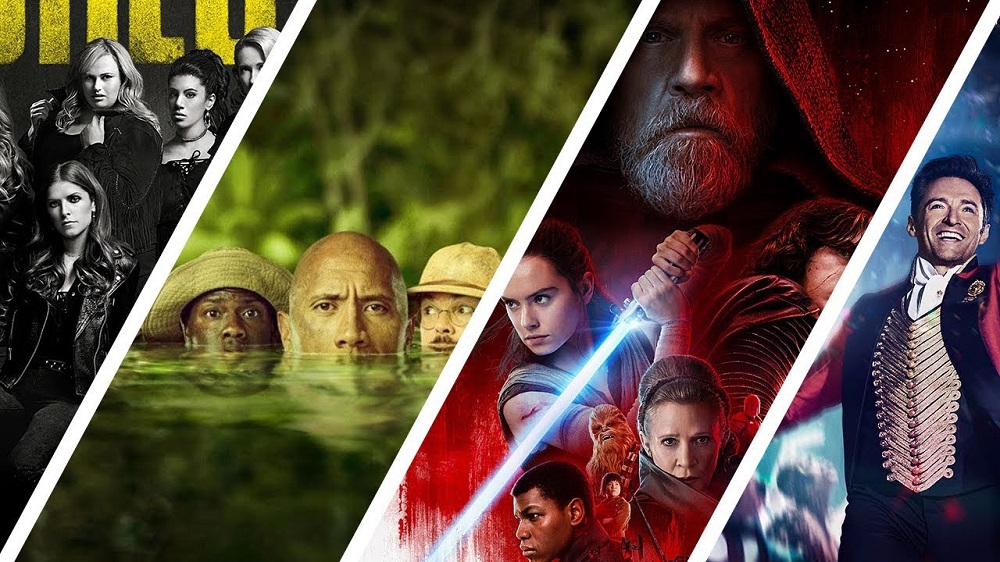 It’s no surprise that “Star Wars: The Last Jedi” held the top spot at the holiday weekend box office, and “Jumanji: Welcome to the Jungle” is looking to have some legs. “Pitch Perfect 3” may not have satisfied the critics, but it did enough for audiences to get the third spot, but Matt Damon continues his cold touch on films as “Downsizing” bombed.

“Star Wars: The Last Jedi” is continuing its dominance over the movie galaxy as expected, outpacing three new releases. The eighth installment in the Disney-owned space saga is expected to add another nearly $69 million to its coffers over the weekend, according to studio estimates Sunday.

Disney projected that “The Last Jedi” would take in an additional $32.2 million on Christmas Day, one of the busiest moviegoing moments of the year. Disney said on Sunday that “The Last Jedi” has taken in roughly $380.3 million in overseas release bringing its total cume to $745.4 million. The movie will be released on Jan. 5 in China, the world’s second-biggest theatrical market behind North America.

By the end of Christmas Day, “Welcome to the Jungle” will have taken in about $64 million, according to Sony projections. That could put this movie on a course to collect $180 million or more over its domestic run, a strong total that (depending on interest overseas, where early returns appear encouraging, analysts said) could turn “Jumanji” into an ongoing series for the studio — the Hollywood equivalent of pay dirt.

“I see an incredible amount of momentum for this film as we head into one of the biggest moviegoing weeks of the year,” Adrian Smith, Sony’s president of domestic distribution, said by phone. “You want a big event film that can stand on its own in a crowded marketplace, and that is what our filmmakers delivered.”

“Welcome to the Jungle,” an action comedy about teenagers who find themselves trapped inside a video game, received mostly positive reviews from critics, and ticket buyers gave it an A-minus grade in CinemaScore exit polls, boding well for word of mouth. Sony spent at least $90 million to produce the movie, after accounting for tax credits and not including significant marketing costs.

These three new releases collectively earned less than “The Last Jedi” since opening on Friday.

“It’s an overwhelming array of options at the movie theater, which could prove daunting to most moviegoers,” said box office analyst Paul Dergarabedian of comScore. “But you’d have to be a Scrooge not to find a movie you like in this marketplace.”

Sony’s president of distribution, Adrian Smith, said he was “absolutely pleased” with the performance of “Jumanji” so far.

“It’s above our expectations,” he said. “We have incredible momentum as we head into one of the biggest movie-going weeks of the year.”

Dergarabedian said the period between Christmas and New Year’s Day is traditionally among the busiest times at the Cineplex. Families are together and theaters are brimming with blockbusters and awards-season hopefuls. Two celebrated films, “Darkest Hour” and “The Shape of Water,” expanded to hundreds of ore screens this weekend.

In contrast, an original musical, “The Greatest Showman” (20th Century Fox), arrived on a muted note, collecting about $8.6 million between Friday and Sunday, for a total since its Wednesday release of $13.2 million, below analyst expectations. Christmas ticket sales could add $5 million, according to comScore.

Fox had hoped that a mix of stars, including Hugh Jackman, Michelle Williams, Zac Efron and Zendaya, could help “The Greatest Showman” win over ticket buyers who might be reluctant to see an original musical. With the help of Emma Stone and Ryan Gosling, “La La Land” did it last year. “The Greatest Showman,” which cost a hefty $84 million to produce, even features songs by Benj Pasek and Justin Paul, the duo who won an Oscar for their contribution to “La La Land.”

But unlike that musical, “The Greatest Showman” underwhelmed critics, likely hurting turnout among older women, the film’s target audience. It did receive an A grade from CinemaScore, however.

Two other new films bombed in wide release. The social satire “Downsizing” (Paramount), starring Matt Damon as a man who lives in a world where people can shrink themselves to live in environmentally friendly micro-communities, arrived to about $4.6 million in ticket sales between Friday and Sunday. “Downsizing,” directed and co-written by the Oscar-winning Alexander Payne (“The Descendants”), cost $68 million to make, an eye-popping amount for an art house-minded film.

It received weak reviews and a C grade from CinemaScore.

Mr. Damon has been on a box office cold streak — his last two films were “Suburbicon” and “The Great Wall,” both misfires — and made comments about sexual harassment while promoting “Downsizing” that prompted a backlash. He also did not appear at the premiere for “Downsizing,” citing a family illness.