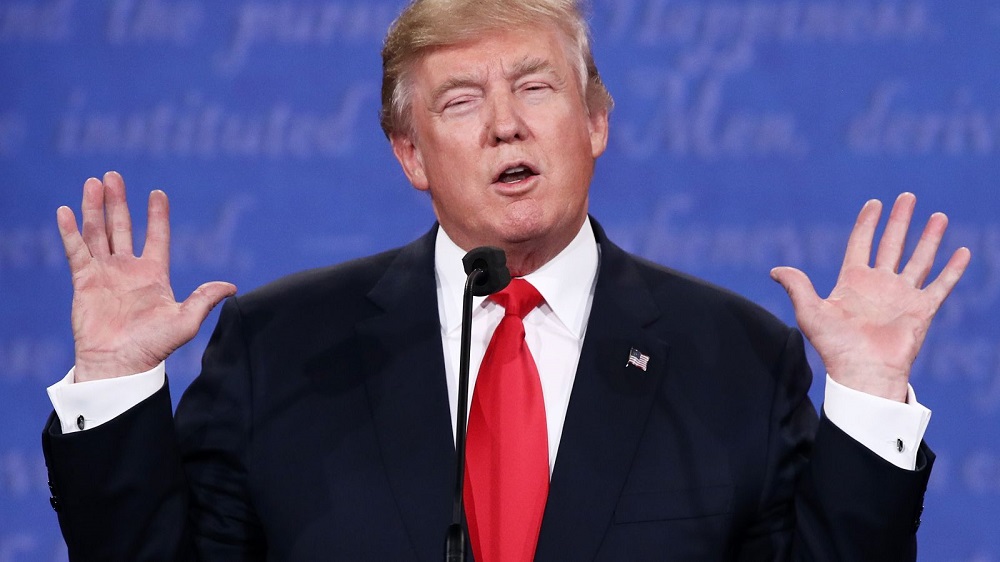 Donald Trump was going well in the third and final 2016 Presidential debate against Hillary Clinton, but after enough prodding, his composure began to crack. The first major crack hit when he was asked if he would accept the final 2016 election results after his running mate Mike Pence and campaign manager said yes, they would.

Threatening to upend a fundamental pillar of American democracy, Donald Trump refused to say Wednesday night that he will accept the results of next month’s election if he loses to Hillary Clinton. The Democratic nominee declared Trump’s resistance “horrifying.”

Trump had spent the days leading up to the third and final presidential debate warning voters that the election would be “rigged.” Asked whether he would accept the outcome if Clinton emerges victorious, he said, “I will tell you at the time. I’ll keep you in suspense.”

Trump’s assertions raise the prospect that millions of his supporters may not accept the results on Nov. 8 if he loses, thrusting the nation into uncharted territory. Free and fair elections, with the vanquished peacefully stepping aside for the victor, have been the underpinning of America’s democratic tradition since the country’s founding 240 years ago.

The Republican National Committee immediately disavowed Trump’s statement. There is no evidence of widespread voter fraud, and election officials across the country have denied and denounced Trump’s charges.

Wednesday’s contest quickly shifted from a calm, policy-focused faceoff into a bitter and deeply personal confrontation. Trump called Clinton a “nasty woman,” while the Democrat panned him as “unfit” to be commander in chief.

Clinton, who began the debate with a lead in nearly all battleground states, forcefully accused Trump of favoring Russia’s leader over American military and intelligence experts after the Republican nominee pointedly refused to accept the U.S. government’s assertion that Moscow has sought to meddle in the U.S. election.

She charged that Russian President Vladimir Putin was backing Trump because “he’d rather have a puppet as president of the United States.”

Trump denied any relationship with Putin and said he would condemn any foreign interference in the election. But he notably declined to back the intelligence community’s assessment that Russia was involved in the hacking of Democratic organizations. The Clinton campaign has said the FBI also is investigating Russia’s involvement in the hacking of a top adviser’s emails.

The 90-minute contest in Las Vegas came just under three weeks before Election Day and with early voting underway in more than 30 states. Trump has struggled to expand his support beyond his most loyal backers and must reshape the race in its closing days if he hopes to defeat Clinton.

The candidates clashed repeatedly over their drastically different visions for the nation’s future. Trump backed Supreme Court justices who would overturn the landmark Roe vs. Wade ruling, while Clinton vowed to appoint justices that would uphold the decision legalizing abortion, saying, “We have come too far to have that turned back now.”

The businessman entered the final debate facing a string of sexual assault accusations from women who came forward after he denied in the previous contest that he had kissed or groped women without their consent. That Trump denial followed the release of a video of in which he’s heard bragging about exactly that.

Trump denied the accusations anew Wednesday night, saying the women coming forward “either want fame or her campaign did it.” He falsely said the women’s allegations had been debunked.

Clinton said Trump “thinks belittling women makes him bigger. He goes after their dignity, their self-worth.” She avoided answering a question about her husband’s infidelities.

Trump pressed Clinton on immigration, accusing her of wanting an “open borders” policy, a characterization she vigorously disputes. The Republican, who has called for building a wall the length of the U.S.-Mexico border, blamed some “bad hombres here” for drug epidemics around the country, and promised “we’re going to get ’em out.”

Clashing on trade, Trump said Clinton had misrepresented her position on the Trans-Pacific Partnership, noting that she had originally called it the “gold standard” of trade agreements. Clinton shot back that once the deal was finished, it didn’t meet her standards.

Both were asked if they would consider tax increases or benefit cuts to support Social Security and Medicare programs. Trump said he would cut taxes and repeal and replace the Affordable Care Act, but he did not detail any plans for Social Security or other entitlement programs. Clinton said she would put more money in the Social Security trust fund through increasing taxes on the wealthy and other methods and promised not to cut benefits. She also argued that the Affordable Care Act has extended the solvency of Medicare and said she would work to bring costs down.

On foreign policy, Clinton reasserted her opposition to sending a large-scale U.S. troop presence to the Middle East to defeat the Islamic State. She’s backed a no-fly zone in Syria, which would mark an expansion of the current U.S. strategy.

For Trump, the debate marked one of his final chances to shift the trajectory of a race that appears to be slipping away from him. Clinton’s campaign is confidently expanding into traditionally Republican states, while Trump’s narrow electoral path is shrinking.

Still, Clinton has struggled throughout the campaign to overcome persistent questions about her honesty and trustworthiness. In the campaign’s closing weeks, she’s begun appealing to Americans to overcome the deep divisions that have been exacerbated by the heated campaign, saying on stage Wednesday that she intended to be a president for those who vote for her and those who do not.

Clinton faced debate questions for the first time about revelations in her top adviser’s hacked emails that show her striking a different tone in private than in public regarding Wall Street banks and trade. But she quickly turned the discussion to Russia’s potential role in stealing the emails.

Underscoring the deep discord between Trump and Clinton, the candidates did not shake hands at the beginning or end of the debate.