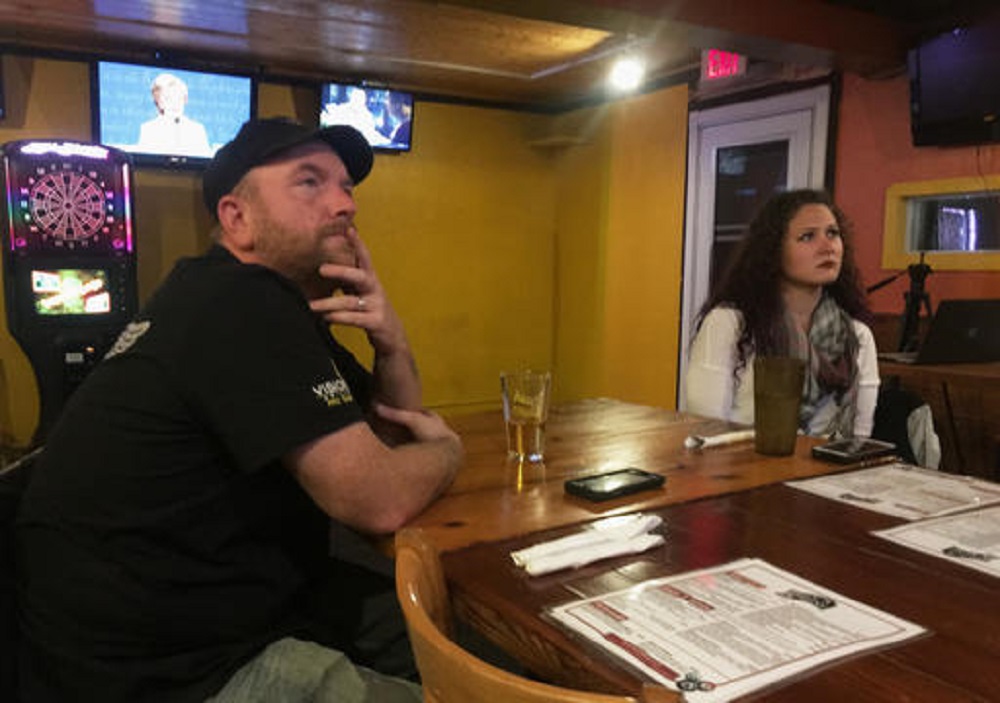 The third and final 2016 Presidential debate between Hillary Clinton and Donald Trump had pretty much the same results and the first two in that undecided voters are still up in the air who they will vote for.

Trump help up well for the first forty minutes before devolving into some headline making comments while Clinton held her ground but neither made any headway with swaying that important undecided vote.

As a tumultuous campaign nears an end, undecided voters across the country watched the final debate of the U.S. presidential race with a mix of skepticism and rapt attention Wednesday night.

They were searching for clarity, and some found it. But others remained painfully undecided just a few weeks before the election, saying neither candidate won them over.

“I heard a lot of the same rhetoric spewed over and over again,” said 41-year-old Damon Holter, who makes barbecue sauces and marinades in River Falls, Wisconsin. “I know I need to make a decision. I just don’t know how to get there.”

Here’s what else Holter and others had to say: 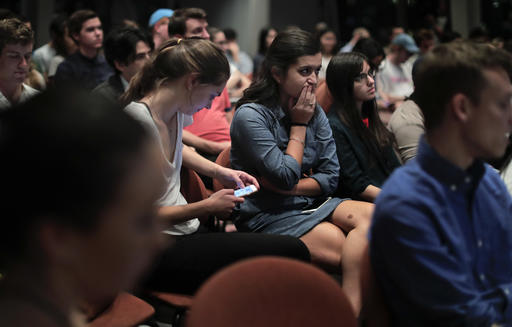 Watching the start of the debate at Bo’s ‘N Mine bar and grill in River Falls, Holter took note when Hillary Clinton and Donald Trump again did not shake hands.

“He’s just like a little kid,” he said when Trump began speaking.

The GOP candidate did a better job than in the first two debates, Holter said. Holter saw a “bit of a role reversal” this time, with Trump taking charge and Clinton stumbling.

But when Trump talked about the U.S. border with Mexico, Holter scoffed: “The whole notion of a wall is pretty ridiculous.”

Overall, he said, nothing either candidate said swayed him.

Chadd Bunker, 50, a union truck driver in Sparks, Nevada, who considers himself largely politically apathetic, said after the debate he’s still not sure if he will end up voting, but he doesn’t think he’ll cast his ballot for Trump.

The longtime LA Dodgers fan kept an eye on his laptop streaming the National League championship against the Cubs while watching the debate in his living room with his wife Karen, a staunch Democrat.

“I think Hillary kicked his butt. And that’s my unbiased opinion, because I don’t really care,” said Chadd Bunker, an avid outdoorsman and gun owner. “She may be crooked. She may have done stuff, but she seems the most logical.”

Bunker cast his first presidential vote for Ronald Reagan in 1984, voted for Obama in 2008 and sat out the 2012 election. He said he is pro-abortion rights and didn’t learn until Wednesday night that Trump is not. He said that’s an important issue to him.

“The moment that stood out to me was when she said that he has degraded women and put down women, and that’s who he is,” Bunker said. “I’m locker room guy … but he does degrade women.”

But he doesn’t think his life will change much regardless of who wins. He likes Trump’s experience in the business world and believes Clinton would be better at handling foreign affairs.

“Neither one of them is going to come to my house and take my guns,” Chadd Bunker said. “If one of them could promise the stock market won’t crash, I’d vote for them.”

The VERDICT: “I don’t know if I decided one way or the other. But if I did have to vote, I would probably vote for Hillary Clinton. I would not vote for Trump,” Chadd Bunker said.

Hussien Kazwini, a community college student in Toledo, Ohio, says this debate was more substantive, but there were no big moments that changed the race.

“Hillary was on the defensive, but I don’t think Trump made a big splash to change or damage Hillary’s momentum.”

Kazwini, whose parents were born in Lebanon before coming to the United States 30 years ago, will vote in his first election. He says Trump’s stand on immigration and threats to deport people “isn’t morally right” but he also doesn’t believe there should be open borders.

“He can’t help himself,” Kazwini said.

THE VERDICT: He’s still undecided but leaning toward Clinton. He says Trump’s comments about women and his demeanor are not huge issues. However, “I want to hold a president to higher standards.”

Taylor Botwinis of Clinton Township, Michigan, is 26, but this will be the first time she casts a ballot in a presidential election.

Clinton is a no-go for the home-school mother of three. For Botwinis, the debate was an opportunity to hear more from Trump and decide whether to support the Republican or vote for a third-party candidate.

She filled a page with handwritten notes early in the debate but put down her pen when the discussion slid into finger-pointing over ethics, morals and fitness for office.

Botwinis noted Trump didn’t directly answer when asked about U.S. troops possibly going to Syria under his presidency. She liked his pledge to improve the economy, saying too many college graduates aren’t working in their field of study.

THE VERDICT: Botwinis said she’ll likely vote for Trump because of his “stances, not his personality.”

Matt Alsaeedi, 26, felt refreshed by Clinton’s authenticity during much of the debate, saying an overall mistrust in government “hurts her as much as it helps her” as a candidate.

The Charlotte School of Law student originally from Sandy Run, South Carolina, who said he leans to the left politically, was listening most for any discussion of foreign policy issues.

“I liked Secretary Clinton’s specificity as to what she wanted to do, her knowledge of the issues,” Alsaeedi said. “I did not get that impression from Donald Trump, but then again, I expect him to delegate most of those duties anyway.”

The biggest disappointment to Alsaeedi was a lack of discussion of veterans issues.

“There’s a crisis with mental health issues,” he said. “There’s an epidemic, and it wasn’t even mentioned, and it bothers me. … I would have expected Secretary Clinton to at least have dropped the ‘V’ word, and it was not.”

THE VERDICT: Alsaeedi remains undecided, saying he was turned off by Clinton’s polished-politician persona.

“I was on board with her until she opened the can in the conclusion,” he said. “It felt like she just spewed this message. I’m undecided still out of a lack of trust in Secretary Clinton, unfortunately.”

Alanna Conti, a 25-year-old graphic designer from rural Sweet Valley, Pennsylvania, changed her party registration from independent to Democrat so she could vote for Bernie Sanders.

After he lost the primary, she thought about casting her ballot for Libertarian Gary Johnson or Green Party candidate Jill Stein. But Conti doesn’t want to throw away her vote so she’s considering backing Trump or Clinton, even though “I dislike both of them very much.”

Conti’s views are all over the map. She favors universal health care and free public college, but she’s also open to middle-class tax cuts and even a corporate tax cut, if it could be shown that would bring jobs back from overseas.

As she watched the debate at her home, Conti drew two columns on a pad – one labeled Clinton, the other Trump – and quietly took notes on what the candidates said about the Supreme Court, the Second Amendment, abortion, the economy, foreign policy. She barely uttered a word as she watched and listened, her notes extending to a second page.

Afterward, Conti said Clinton won on policy, as Clinton’s views on guns, college and abortion more closely align with hers.

“It’s a lesser of two evils election, I think, unless you’re like a staunch Hillary Clinton supporter or Trump supporter, Anyone who’s in the middle is not happy at all with the choices we have,” she said.

THE VERDICT: Conti says she’ll probably vote for Clinton. “I still don’t like her. But if she does half the things she says she wants to do, I’ll be pretty happy.”

Conti said she was far more interested in the candidates’ policy proposals than their personal foibles. “Trump said a whole lot of nothing.”

Other key issues for Ross, who has four college and post-graduate degrees, are immigration, health care and character.

But this might be her first election in which she doesn’t cast a presidential vote, and Ross is extremely troubled about that.

Neither Trump nor Clinton is a role model, and the country needs that in a president, said Ross, who watched the debate with her husband, Mike, at their northeast Denver home.

As an on-call nurse, Ross said she gets less coverage under the Affordable Care Act than the immigrants in the country illegally who go to Denver’s St. Joseph Hospital to have “anchor babies” with U.S. citizenship.

She doesn’t support blanket bans. But “it hurts me as a taxpaying American to see that you’re getting excellent health care and I qualify for less quality health care coverage that those coming in.”

On the candidates’ comments about a rigged election, Ross said: “What’s sad is I agree with both. I want facts, not whining that it’s rigged. She owes a lot of people a lot of favors. But I think she’s absolutely right about respect for American elections.”

THE VERDICT: Ross is determined to vote but still feels she has no choices.

Dave Hart, 39, of Phoenix, is a Democrat torn between voting for Clinton and a third-party candidate.

A software support specialist who works from home, Hart watched the debate with a friend at Chambers On First pub in downtown Phoenix.

Hart started out as a Bernie Sanders supporter and never warmed up toward Clinton. It has nothing to do with her email issues, he said. It’s her history as “somebody that plays the game to get what she wants rather than do what’s right.”

Hart has put off filling out his early ballot, which arrived last week. He saw the final debate as Clinton’s last chance to sway him.

Hart has been adamantly opposed to Trump, and the debate only cemented his opinion of the GOP nominee. Hart laughed several times, especially when Trump said he would run the country the way he runs his company.

“Look how many times he’s gone bankrupt or ripped off little people – little businesses,” Hart said. But he did think the billionaire showed more restraint than the last debate.

As Trump continued to talk over moderator Chris Wallace and Clinton, Hart joked there was one way Clinton could get his vote.

“If she just walked over right now and punched him in the face, I would go home and fill out my ballot,” Hart said.

THE VERDICT: Hart is still not 100 percent behind Clinton did appreciate some of her comments about helping families, women and children. He wants to do more research but might half-heartedly join Team Hillary.

“Honestly, if I can’t think of a reason not to vote for her, I will,” Hart said.