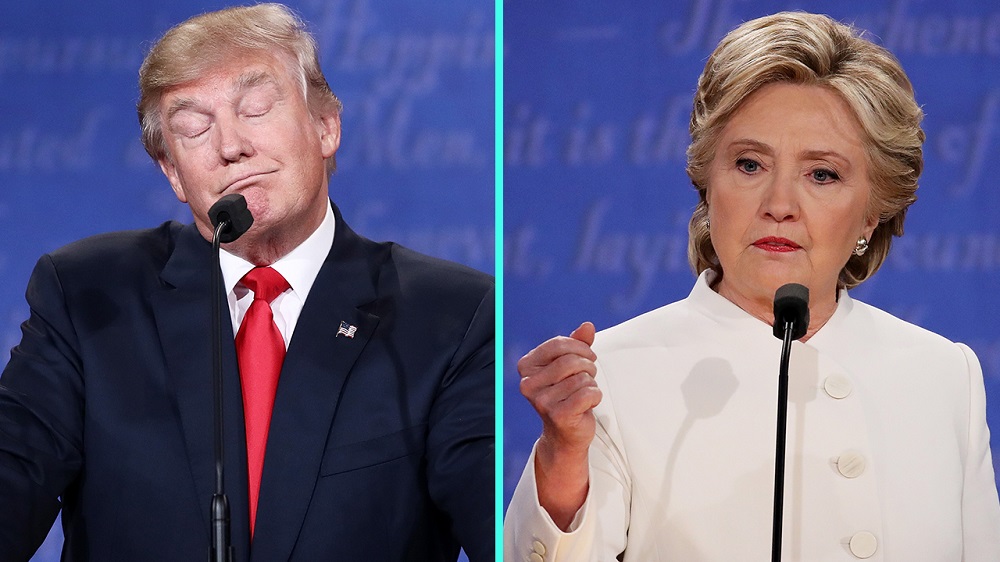 For about forty minutes it looked like Donald Trump had really taken some notes for his debate prep, but Hillary Clinton knew his Achilles heel and struck enough times to send the man off into his spiral.

Clinton didn’t stumble, but Trump made a few good points and fights. The biggest thing the Republicans could hope for just didn’t happen as the third and final 2016 Presidential debate didn’t change many minds.

After two debates filled with pointed rhetoric, intimidation tactics and surprise guests, Hillary Clinton and Donald Trump met Wednesday night at the University of Nevada, Las Vegas for their third and final face-off.

Clinton, whose lead in national polls has expanded in recent weeks, sought to protect her standing and further differentiate her policy proposals from those of her GOP rival, Trump.

As Trump attempted to make up ground, he utilized the presence of a few invited guests — Malik Obama, the half-brother of President Barack Obama; Leslie Millwee, who claimed she was groped by Bill Clinton in 1980; and “Lone Survivor” Marcus Luttrell — to increase the pressure on Clinton.

Here are some of the most memorable lines from the third debate:

“I would hope that the Senate would do its job and confirm the nominee that President Obama has sent to them.”

Moderator Chris Wallace of Fox News kicked off the debate with a question to the candidates about their plans for Supreme Court appointments. In her response, Clinton included criticism for the senate’s inaction on current nominee Merrick Garland.

“I believe, if my opponent should win this race, which I truly don’t think will happen, we will have a Second Amendment which will be a very, very small replica of what it is right now.”

Trump used his opportunity to speak about the Supreme Court to attack Clinton’s stance on gun control and providing a prediction for Election Day.

”I think it’s terrible, if you go with what Hillary is saying, in the ninth month, you can take the baby and rip the baby out of the womb of the mother just prior to the birth of the baby.”

As the discussion turned to abortion rights, Trump described the reasoning behind his pro-life stance.

”Well, that is not what happens in these cases. And using that kind of scare rhetoric is just terribly unfortunate.”

”We have some bad hombres here, and we’re going to get them out.”

Following an explanation of his immigration policies, with emphasis on the U.S.-Mexico border, Trump used the Spanish word for “men” to describe people he would have deported.

After Trump mentioned his August meeting with Mexican President Enrique Peña Nieto, Clinton attacked Trump’s inability to raise the issue of building a border wall during the visit.

”You are very clearly quoting from WikiLeaks and what’s really important about WikiLeaks is that the Russian government has engaged in espionage against Americans.”

Wallace asked about Clinton’s border policies, quoting from leaked emails in which a transcript of a speech stated she was in favor of “a hemispheric common market with open trade and open borders.”

”That was a great pivot off the fact that she wants open borders, OK?”

When Trump had the chance to speak, he reminded the audience about Wallace’s original question.

“[Russian President Vladimir Putin would] rather have a puppet as president of the United States.”

Clinton provided her theory as to why Russia could be behind the hacking of emails later released by WikiLeaks, implying that Putin wants Trump in power.

“No puppet, no puppet… You’re the puppet.”

“I never met Putin. This is not my best friend.”

The GOP candidate continued to distance himself from the Russian president.

“Donald has bought Chinese steel and aluminum. In fact, the Trump Hotel right here in Las Vegas was made with Chinese steel. So he goes around with crocodile tears about how terrible it is, but he has given jobs to Chinese steelworkers, not American steel workers.”

Clinton attacked Trump’s record on outsourcing, saying that the Republican candidate couldn’t be trusted to negotiate trade deals since he didn’t have the best interests of American workers at heart.

“I didn’t even apologize to my wife who is sitting right here because I didn’t do anything. I didn’t know any of these women. I didn’t see these women. These women, the woman on the plane, I think they want either fame or her campaign did it and I think it’s her campaign.”

Wallace asked about the recent scandals surrounding Trump, including allegations of sexual assault. Trump said the accusations were “debunked” and that he had nothing to be sorry for.

“Donald thinks belittling women makes him bigger. He goes after their dignity, their self-worth, and I don’t think there is a woman anywhere who doesn’t know what that feels like.”

Clinton doubled down on the claims against Trump during the discussion. Trump later responded by saying “nobody has more respect” for women than he does.

“I’d be happy to compare what we do with the Trump Foundation which took money from other people and bought a six-foot portrait of Donald. I mean, who does that?”

Trump took issue with the Clinton Foundation accepting donations from people and countries that “push gays off buildings” and “kill women and treat women horribly.” Clinton responded by pointing to reports that alleged the Trump Foundation misused funds.

Wallace asked Trump about his claims that the election is “rigged,” mentioning that his running mate, Mike Pence, and daughter, Ivanka Trump, said they would accept the results of the election.

“I will look at it at the time. I’m not looking at anything now.”

“What I’m saying is that I will tell you at the time. I’ll keep you in suspense, OK?”

Trump twice demurred, saying he would not pledge at this point to accept the election’s results.

“There was even a time when he didn’t get an Emmy for his TV program three years in a row, and he started tweeting that the Emmys were rigged.”

“Should have gotten it.”

Clinton called Trump’s stance on the election results “horrifying” and listed a number of instances in which Trump claimed situations were rigged against him. Trump responded by saying “The Apprentice” should’ve won one of the television awards.

”The killer of the dozens of people at the nightclub in Orlando, the Pulse nightclub, was born in Queens, the same place Donald was born.”

During a back-and-forth over the idea of vetting refugees to the U.S., Clinton reminded Trump that not all terrorists arrive from the Middle East.

”We’ve had people that are political hacks making the biggest deals in the world.”

Trump decried trade deals negotiated by the U.S. after Wallace asked why the candidates were ignoring the growing national debt.

“Your husband disagrees with you.”

Clinton outlined the positive benefits of the Affordable Care Act before Trump invoked comments made by former President Bill Clinton on October 3 describing “Obamacare” as “this crazy system.”