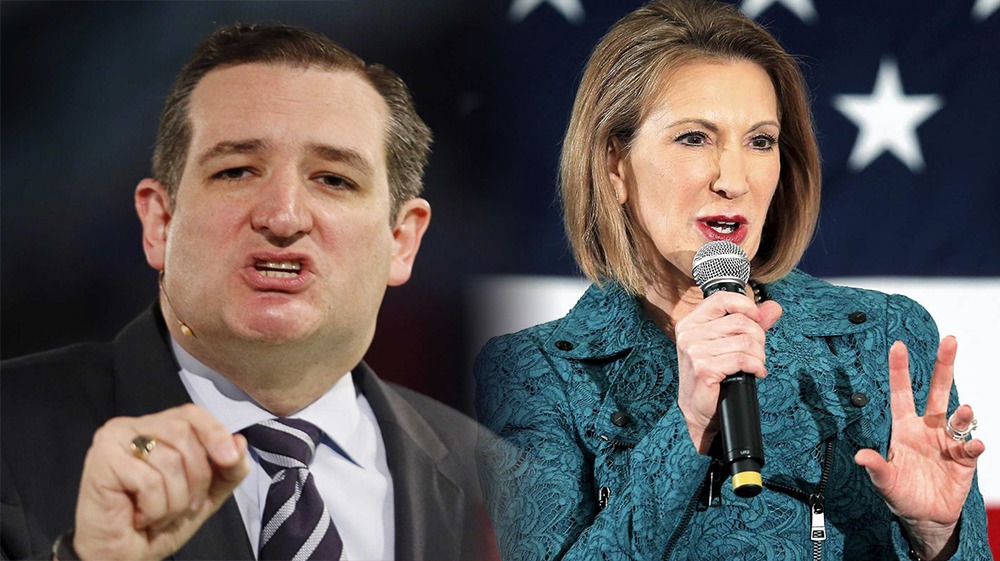 In what seems like a ‘Hail Mary’ move, Ted Cruz surprised many by choosing Carly Fiorina as his running mate in the 2016 Presidential Election. Cruz is obviously desperate as Tuesday’s primaries had him in third place on the Republican side in many states behind Ted Kasich. Somehow, he thinks adding Fiorina to his ticket will solidify Republican belief in him that hasn’t ever been strong. Oddly enough, Sarah Palin would have probably been a safer choice than Fiorina, but it looks like Cruz is at the point of no return now.

He’s more than aware that he’s got the Republican party support because they don’t want Donald Trump to be the nominee, but these actions only show how out of step the party has become. They’re not listening to what they’re party wants in terms of voters which only creates more of a chasm.

Donald Trump, naturally, had plenty to say about this match made in oddity.

Republican presidential front-runner Donald Trump mocked rival Ted Cruz’s announcement today that Carly Fiorina would be his running mate, should the Texas senator be the Republican nominee, during a rally at the Indiana State Fairground in Indianapolis tonight. Trump drew thousands of supporters to the venue last week, marking his first campaign stop ahead of the state’s May 3 primary.

“First of all, you have to look — Cruz can’t win,” Trump told his supporters. “What’s he doing picking vice presidents? He can’t win.”

His statement was true. However, Cruz is not the first candidate to announce a vice-presidential pick before becoming the nominee. The other? Ronald Reagan. In 1976, Ronald Reagan announced Sen. Richard Schweiker before his contested convention with Gerald Ford.

On the side, working for Ford was another familiar name; Paul Manafort, who is now Trump’s convention manager and the man working to ensure that his candidate doesn’t have to duke it out on the convention floor.

Fiorina, the former chairwoman of Hewlett-Packard, suspended her own presidential campaign in February.

An astonishing Republican presidential primary season has taken another unusual turn, with Texas Sen. Ted Cruz announcing Carly Fiorina as his running mate — even though he’s mathematically unable to become the GOP nominee through the regular voting process.

It was the move of a candidate desperate to block Donald Trump, a front-runner who is only growing stronger as the primary contest presses deeper into the spring.

Trump now has 80 percent of the delegates he needs for the Republican nomination, though he could still fall short and have to battle Cruz for the nomination at a contested convention. Trump must win 48 percent of the remaining delegates to avoid that scenario.

Cruz’s White House hopes now rest largely on Tuesday’s primary in Indiana. That’s where he announced that he was tapping Fiorina as his vice presidential pick, bringing aboard a prominent Republican woman who has been eager to take on both Trump and Democratic front-runner Hillary Clinton.

In fiery remarks, Fiorina panned Trump and Clinton as a pair of liberals who would do little to shake up Washington.

While Cruz grasped for a way to slow Trump, the businessman turned his attention to the general election. In a wide-ranging, though often vague, foreign policy speech, Trump sought to answer questions about his temperament and preparedness to be commander in chief.

He outlined a doctrine that he said would put American interests first and leave allies to fend for themselves if they don’t contribute financially to back up security agreements. He vowed to send U.S. troops into combat only as a last resort, a break from years of hawkish Republican foreign policy.

“Our goal is peace and prosperity, not war and destruction,” he declared in a 38-minute address that was heavy on broad statements and light on specific policy details. Unlike his rambunctious, free-wheeling rallies, the event featured Trump reading prepared remarks in a measured tone off a teleprompter.

He also used the address to target Clinton, his expected opponent in a general election. He assailed her handling of the deadly 2012 attack on Americans in Benghazi, Libya, and said that during her tenure as secretary of state, the U.S. had a “reckless, rudderless and aimless foreign policy.”

Clinton’s campaign sees foreign policy as an area ripe for a sharp general election contrast with Trump, given her years at the State Department and his lack of experience. In a campaign conference call Wednesday, Clinton supporter and former Secretary of State Madeline Albright called Trump’s views “incoherent.”

“I’ve never seen such a combo of simplistic slogans and contradictions and misstatements in one speech,” Albright said.

Like Trump, Clinton emerged from this week’s Northeastern primaries with a stronger claim on her party’s nomination. With four victories Tuesday, she now has 91 percent of the delegates needed to clinch the Democratic nomination.

Vermont Sen. Bernie Sanders conceded Wednesday that the delegate math was not in his favor, and his campaign announced it was laying off hundreds of field staffers and other aides. Sanders said he still aims to win the Democratic nomination but will also seek to assemble as many delegates as possible to influence the party’s platform and message.

Cruz hoped that adding Fiorina to his potential ticket would be a draw for Republicans desperate to keep Clinton out of the White House. Fiorina, the former Hewlett-Packard chief executive, was frequently praised for her tough criticism of Clinton during her own presidential campaign and also irritated Trump with her sharp retorts during GOP debates.

Since dropping out, she has become Cruz’s most active surrogate, making frequent campaign appearances alongside him and on her own.

Candidates typically wait until they’ve secured their party’s nomination before picking a running mate, in part to avoid appearing to be getting ahead of the will of the voters.

But in Cruz’s case, the announcement seemed aimed at keeping up the idea that he has a claim to the nomination and potentially attracting more voters in Indiana and other remaining states — including Fiorina’s home state of California.

Trump won more than 50 percent of the Republican votes in Pennsylvania, Connecticut and Maryland in Tuesday’s elections, and scored over 60 percent in Delaware and Rhode Island.

Similarly, Clinton won convincingly in four of the five contests, scoring 56 percent in Pennsylvania and 63 percent in Maryland — the two biggest contests of the night. Sanders won the Rhode Island primary with 55 percent of the vote.