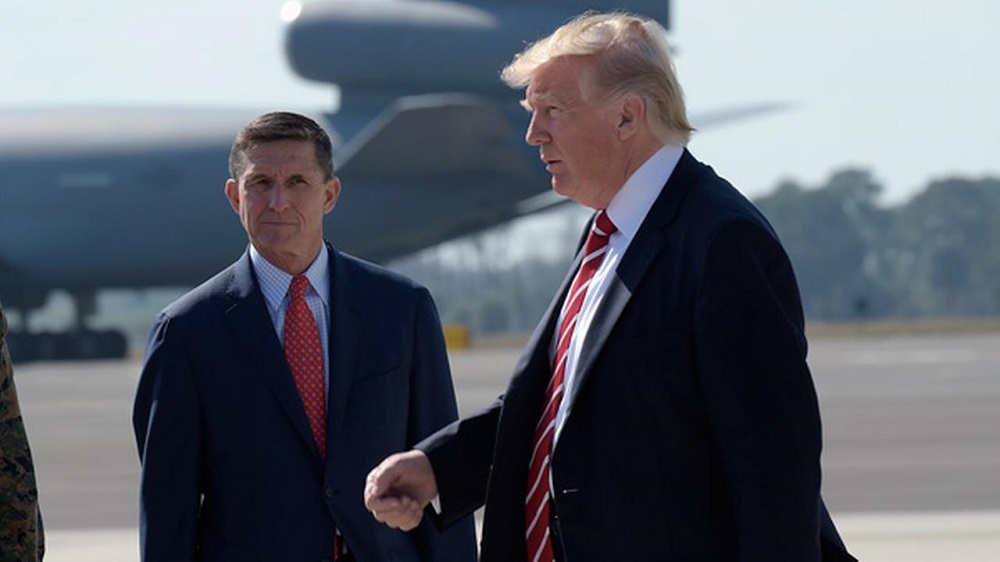 When the shock heard round the world about Michael Flynn pleading guilty and working with Bob Mueller on the Russia investigation hit Friday, everyone knew that Donald Trump would be tweeting out his frustration come Saturday. Unless his staff or Ivanka managed to pry his phone from his hands.

The first tweet caused plenty of media attention, but not the kind the President really wanted.

I had to fire General Flynn because he lied to the Vice President and the FBI. He has pled guilty to those lies. It is a shame because his actions during the transition were lawful. There was nothing to hide!

This tweet gave his staff and lawyers plenty of anxiety, and Trump was relatively quiet throughout Saturday, but on Sunday, he really felt the need to overcompensate about the former national security adviser Michael Flynn’s guilty plea for lying to the FBI about his contacts with the Russians during the 2016 campaign.

The message he wants every American to know? He’s not worried about it. Not at all. Zero percent. Nada. Zilch.

Since Flynn’s guilty plea on Friday morning, Trump has tapped out double-digit tweets making clear that Flynn’s decision to cooperate with special counsel Bob Mueller’s investigation has no impact on him and, oh yeah, the FBI is super corrupt and bad. Also, the Russia investigation is a hoax. And Hillary Clinton got off easy. The media is bad and dishonest too.

When someone goes overboard like this, it only calls more attention to the thing they don’t want attention on.

It all started Saturday morning with this tweet — that Trump attorney John Dowd now claims he wrote: “I had to fire General Flynn because he lied to the Vice President and the FBI. He has pled guilty to those lies. It is a shame because his actions during the transition were lawful. There was nothing to hide!”

The obvious problem here for Trump — if that tweet is taken as accurate — is that the day after he fired Flynn, he reportedly asked then FBI Director James Comey to see if he could find a way to “letting this go,” meaning the bureau’s investigation into Flynn. If you take Trump/Dowd’s tweet literally, then Trump did so while knowing that Flynn had lied to the FBI.

Thus began a string of Trump tweets (and retweets) in which he seemed to lash out in five directions all at once — which is either an attempt to distract from that first tweet or just Trump tweeting whatever comes into his head at any given moment.

The first strain of this next Trump Twitter tornado was the “Why aren’t we talking about Clinton?” narrative.

“So General Flynn lies to the FBI and his life is destroyed, while Crooked Hillary Clinton, on that now famous FBI holiday ‘interrogation’ with no swearing in and no recording, lies many times…and nothing happens to her?” Trump tweeted. “Rigged system, or just a double standard?”

He followed that one up with this: “Many people in our Country are asking what the ‘Justice’ Department is going to do about the fact that totally Crooked Hillary, AFTER receiving a subpoena from the United States Congress, deleted and ‘acid washed’ 33,000 Emails? No justice!”

Then came the media portion of the tweets.

“Congratulations to @ABC News for suspending Brian Ross for his horrendously inaccurate and dishonest report on the Russia, Russia, Russia Witch Hunt,” tweeted Trump. “More Networks and ‘papers’ should do the same with their Fake News!”

That tweet is in reference to an erroneous report by Ross that Flynn had told the special counsel’s office that Trump as a candidate had instructed him to reach out to Russia. Ross later corrected that to say Trump had done so as president-elect. Ross was suspended four weeks by ABC for the error.

On Sunday morning, Trump turned his focus back to Flynn and Comey. “I never asked Comey to stop investigating Flynn,” he tweeted. “Just more Fake News covering another Comey lie!”

And then, this one an hour later: “After years of Comey, with the phony and dishonest Clinton investigation (and more), running the FBI, its reputation is in Tatters – worst in History! But fear not, we will bring it back to greatness.”

That’s a sampling of the tweets. (You can check out Trump’s feed for the full accounting.) You get the idea.

If there is a method to this madness — and I am on record as being skeptical that there is some sort of deep strategy at work here — it is to muddy the waters, to distract from the Flynn guilty plea by insisting that he’s not at all worried about it and then throwing out lots and lots of other things for his base to focus on/be outraged about.

Which will work for some of Trump’s supporters. But, his rhetoric doesn’t match reality — and it’s important to note that because facts still matter (or at least they should.)

The broad message out of Trump’s tweets over the past 24 hours is that the entire Russia investigation by Mueller is a fraud — run out of a Justice Department that can’t shoot straight.

Here are the basic facts on the matter at hand:

There are more, but those are five key facts that — unless you believe Comey is lying under oath — are indisputable. No amount of Trump tweets or red herrings change those facts.

That Trump is working overtime to insist he is innocent in the entire Russia investigation and to undermine the investigation itself is without question. He has been doing it for months, but that effort appears to have kicked into a much higher gear in the last 72 hours.

The unanswered — and, at the moment, unanswerable — question is why Trump is doing this. Is it purely borne of his reflexive defensiveness and insistence on always seeking to discredit anyone and anything that says something less than nice about him? Or is there something more — or more nefarious — at work here?