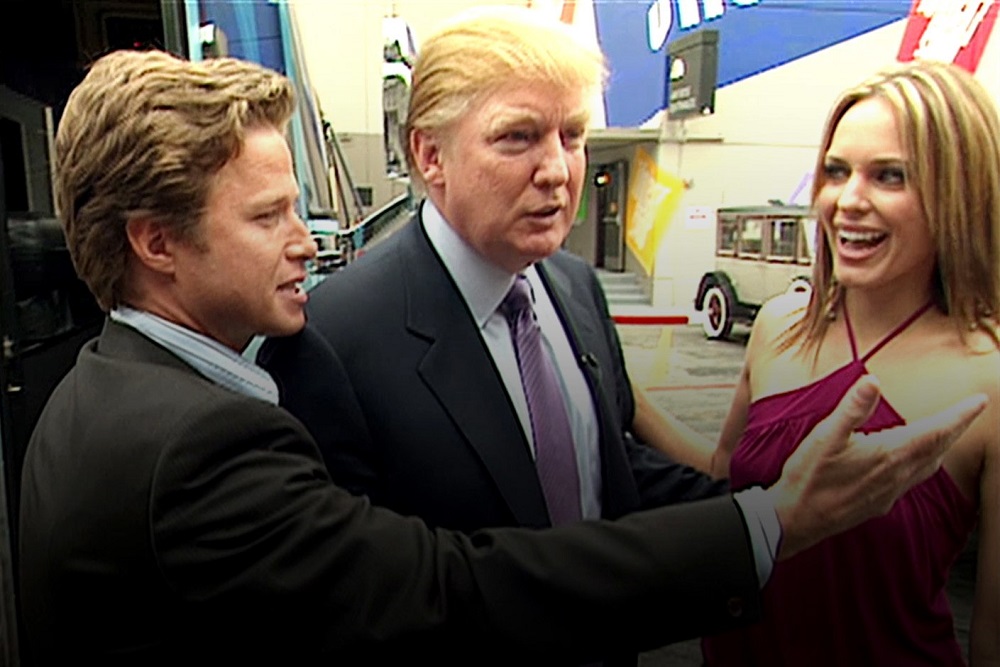 After a very long silence, former “Today” co-host Billy Bush has spoken out on Donald Trump, the man responsible for his being fired for laughing along during the infamous “Access Hollywood” tape that surfaced October 2016.

Trump wound up moving into the White House while Bush got to see his long-term career go up in flames. He’s remained silent, but recently as Trump has commented that the tape ‘didn’t even sound like his voice,” this seems to have inspired Bush to talk.

Billy Bush has pushed back at President Donald Trump’s reported statements suggesting that the voice on the infamous “grab ’em by the pussy” “Access Hollywood” tape was not his, writing that Trump did indeed make the comment in his presence and seven other men.

“Of course he said it. And we laughed along, without a single doubt that this was hypothetical hot air from America’s highest-rated bloviator,” Bush wrote in a New York Times op-ed published Sunday. “Along with Donald Trump and me, there were seven other guys present on the bus at the time, and every single one of us assumed we were listening to a crass standup act.”

Bush recounted several of the sexual harassment allegations against Trump, including those of Jill Harth and Kristin Anderson, stating that he believes the women.

“President Trump is currently indulging in some revisionist history, reportedly telling allies, including at least one United States senator, that the voice on the tape is not his. This has hit a raw nerve in me,” he explained. “I can only imagine how it has reopened the wounds of the women who came forward with their stories about him and did not receive enough attention.”

Bush continued, expressing remorse for his part in stroking “the ego of the big cash cow along the way to higher earnings,” referring to Trump’s tenure on “The Apprentice,” which at the time made him NBC’s “biggest star.”

He also affirmed his solidarity with the women reporting stories of sexual harassment from Trump, acknowledging the difficulty of “being summarily dismissed and called a liar…You have my respect and admiration. You are culture warriors at the forefront of necessary change.”

He finished on a personal note, stating that after being fired from “Today,” the “last year has been an odyssey, the likes of which I hope to never face again: anger, anxiety, betrayal, humiliation, many selfish but, I hope, understandable emotions.”

Bush’s op-ed for the New York Times comes amid rumblings that the host is preparing to emerge from his post-Trump exile and seek new TV work. He is booked to appear on Monday’s edition of “The Late Show with Stephen Colbert.”

On Oct. 7, 2016, The Washington Post published the details of the 2005 tape and posted the audio, in which Trump, in a conversation with Bush, made the remarks about Nancy O’Dell, then the co-host of “Access Hollywood,” as well as women in general. He and Bush had been riding on a bus, but they were both wearing microphones as a camera crew captured their arrival to the NBC Burbank lot, where Trump was to do a cameo on “Days of Our Lives.”

The release of the recording created a crisis for the Trump campaign, as a number of Republicans urged him to drop out of the presidential race. Trump dismissed it as “locker room talk.”

But Bush was fired by NBC over the audio, as he was heard going along with Trump’s remarks. It’s still unknown how the tape was leaked to the Post. As stories have recently surfaced that Trump is questioning the authenticity of the recording, “Access Hollywood” released a statement saying, “The tape is very real.” A member of the production crew also confirmed to media outlets that he recalls hearing the audio of the conversation as it was taking place. 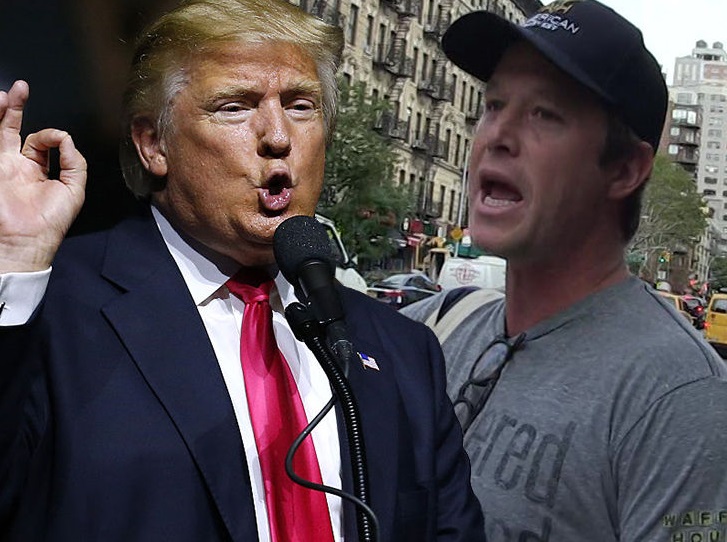 Of course he said it. And we laughed along, without a single doubt that this was hypothetical hot air from America’s highest-rated bloviator. Along with Donald Trump and me, there were seven other guys present on the bus at the time, and every single one of us assumed we were listening to a crass standup act. He was performing. Surely, we thought, none of this was real.

Recently I sat down and read an article dating from October of 2016; it was published days after my departure from NBC, a time when I wasn’t processing anything productively. In it, the author reviewed the various firsthand accounts about Mr. Trump that, at that point, had come from 20 women.

Some of what Natasha Stoynoff, Rachel Crooks, Jessica Leeds and Jill Harth alleged involved forceful kissing. Ms. Harth said he pushed her up against a wall, with his hands all over her, trying to kiss her.

“He was relentless,” she said. “I didn’t know how to handle it.” Her story makes the whole “better use some Tic Tacs” and “just start kissing them” routine real. I believe her.

Kristin Anderson said that Mr. Trump reached under her skirt and “touched her vagina through her underwear” while they were at a New York nightclub in the 1990s. That makes the “grab ’em by the pussy” routine real. I believe her.

President Trump is currently indulging in some revisionist history, reportedly telling allies, including at least one United States senator, that the voice on the tape is not his. This has hit a raw nerve in me.

I can only imagine how it has reopened the wounds of the women who came forward with their stories about him, and did not receive enough attention. This country is currently trying to reconcile itself to years of power abuse and sexual misconduct. Its leader is wantonly poking the bear.

In 2005, I was in my first full year as a co-anchor of the show “Access Hollywood” on NBC. Mr. Trump, then on “The Apprentice,” was the network’s biggest star.

The key to succeeding in my line of work was establishing a strong rapport with celebrities. I did that, and was rewarded for it. My segments with Donald Trump when I was just a correspondent were part of the reason I got promoted.

NBC tripled my salary and paid for my moving van from New York to Los Angeles.

Was I acting out of self-interest? You bet I was. Was I alone? Far from it. With Mr. Trump’s outsized viewership back in 2005, everybody from Billy Bush on up to the top brass on the 52nd floor had to stroke the ego of the big cash cow along the way to higher earnings.

Ten years later, I did speak up. Soon after Mr. Trump declared his candidacy, I let it be known on “Access Hollywood Live” that I thought this was an absurd idea.

In the days, weeks and months to follow, I was highly critical of the idea of a Trump presidency. The man who once told me — ironically, in another off-camera conversation — after I called him out for inflating his ratings: “People will just believe you. You just tell them and they believe you,” was, I thought, not a good choice to lead our country.

I tried to conduct a serious interview with him as a candidate; each time I requested one I was turned down.

This moment in American life is no doubt painful for many women. It is especially painful for the women who have come forward, at the risk of forever being linked to one event, this man, this president of the United States. (I still can’t believe I just wrote that.)

To these women: I will never know the fear you felt or the frustration of being summarily dismissed and called a liar, but I do know a lot about the anguish of being inexorably linked to Donald Trump. You have my respect and admiration. You are culture warriors at the forefront of necessary change.

I have faith that when the hard work of exposing these injustices is over, the current media drama of who did what to whom will give way to a constructive dialogue between mature men and women in the workplace and beyond. The activist and gender-relations expert Jackson Katz has said that this is not a women’s issue — it’s a men’s issue. That’s a great place to start, and something I have real thoughts about — but it is a story for another day.

Today is about reckoning and reawakening, and I hope it reaches all the guys on the bus.

On a personal note, this last year has been an odyssey, the likes of which I hope to never face again: anger, anxiety, betrayal, humiliation, many selfish but, I hope, understandable emotions. But these have given way to light, both spiritual and intellectual. It’s been fortifying.

I know that I don’t need the accouterments of fame to know God and be happy. After everything over the last year, I think I’m a better man and father to my three teenage daughters — far from perfect, but better.