Home All News Politics Who wins and loses with Donald Trump’s Christmas gift aka Republican tax... 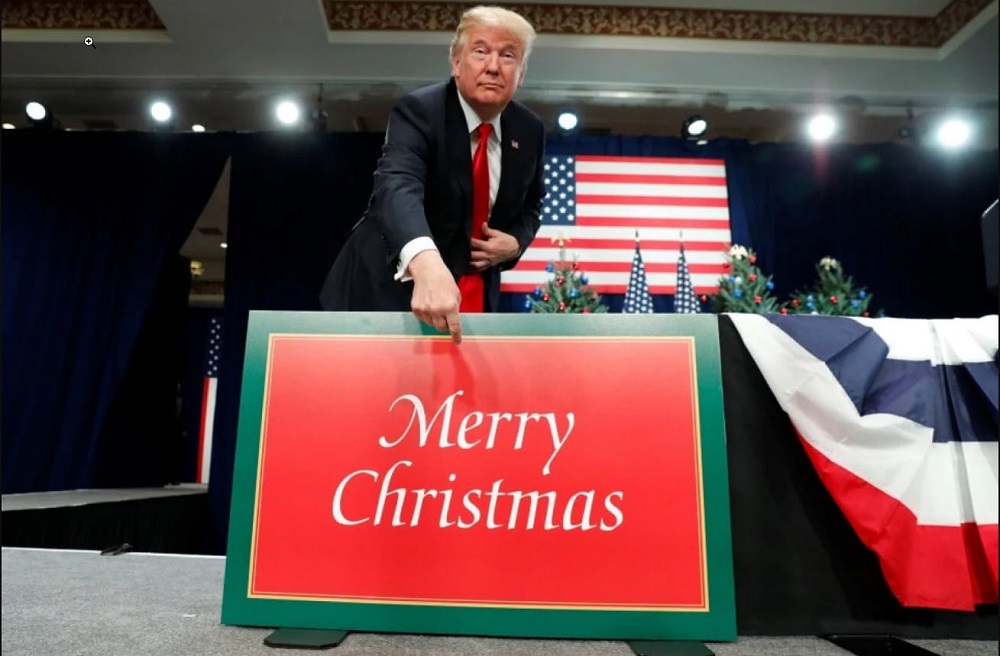 Senator Mitch McConnell has been stating over the past 24 hours that the Senate has the votes to pass the Republicans‘ sweeping tax overhaul, but as more Senators like Sen. Susan Collins signs on, it is looking more than likely.

This will give Donald Trump a much-needed victory after former National Security advisor Michael Flynn pleaded guilty today about lying to the FBI and will now be working with Bob Mueller on the Russia investigation. At this point, Americans will be tested on their support for Trump if the plan does pass with the expected results.

Delighted that the Senate has agreed to include my property tax deduction amendment, that will allow 166,000 Maine taxpayers who itemize to deduct a total of $725 million in property taxes each year. #MEPolitics

With several important changes still expected Friday evening, here’s a rundown of the winners and losers so far:

President Trump. He promised a “big, beautiful” tax cut by Christmas. It’s the centerpiece of his “MAGA-nomics” agenda, and he looks likely to get it (at least by early 2018) as both the House and Senate have passed the major hurdles of passing bills. In fact, it might even end up being a tax cut AND a repeal of the individual health care mandate, one of the least popular Affordable Care Act provisions. Most economists also expect the bill will juice economic growth, at least for the next year or two. The economy has been growing around 3 percent for the past two quarters. If it jumps to 4 percent (or more) in coming quarters, Trump can claim an even bigger victory heading into the 2018 mid-term elections and the 2020 presidential election.

Big corporations. America’s largest companies are about to get the biggest tax cut ever. Both the House and Senate bills slash the top corporate rate from 35 percent to 20 percent. While few corporations actually pay 35 percent, the average is around 25 percent; most still get a break. Profitable companies like Apple and Microsoft also get the bring back the piles of cash they have sitting in offshore accounts to the United States at a very low tax rate (currently just 10 percent in the Senate bill). There are other goodies in the bill for them as well such as the ability to fully deduct the cost of new investments for the next five years. But perhaps the biggest win of all for big business is a change from a worldwide tax system where businesses have to report income earned all over the world to the IRS to a territorial system where they mainly pay taxes only on what was generated in the United States.

People with money in the stock market. The Dow surged above 24,000 for the first time ever this week. The stock market is up about 600 points (2.6 percent) just this week as investors cheer the the tax cuts getting closer to reality. If Trump is able to sign the bill, investors are likely to get a very good deal. Many companies plan to bring cash home from abroad and give a lot of that extra money to investors in the form of higher dividends and stock buybacks (which increase stock prices). Overall, tax cuts mean more larger profits for businesses, which means more money in the pockets of investors.

Many in the middle class (at least for awhile). Republicans have sold the tax plan as a boost to middle-class paychecks. According to the non-partisan Joint Committee on Taxation, 80 percent of Americans earning $50,000 to $75,000 would get a sizable reduction in their taxes by 2019 (the average cut would be about $850, according to the Tax Policy Center). Overall, about 62 percent of Americans would pay at least $100 less in taxes in 2019. But the tax cuts for families don’t last forever. The Senate bill has the lower rates for individuals going away after 2025. Republicans argue a future Congress is likely to extend the cuts, but there is no guarantee that will happen.

Sen. Mitch McConnell (R-Ken.). He did it on taxes. The Senate Majority Leader took a huge blow over the summer when the Affordable Care Act repeal failed. Trump appeared to give him the cold shoulder for awhile, but McConnell is the man of the hour now. He managed to rally GOP senators to deliver the biggest priority of all: tax cuts. It turned out to be a surprisingly difficult task with many senators demanding last-minute changes, but McConnell got the 50 votes he needed.

Sen. Pat Toomey (R-Penn.). The Pennsylvania senator was one of the main authors of the Senate tax bill, and he defended it vigorously on the floor of the U.S. Senate. As Democrat after Democrat slammed the bill, Toomey calmly stood up and sold the bill as a way to make American companies more competitive and profitable so they will invest more in the United States and hire more workers, hopefully raising wages as well. Toomey played an especially large role in crafting the tax changes for small and large businesses, a very complex tax.

Rich kids. The GOP tax bills make it a lot easier for wealthy parents to pass property and money to their kids. Under current law, up to $5.5 million can be passed down tax-free. After that, there’s a 40 percent tax, known as the “estate tax” (or the “death tax” by critics). The House bill eliminates the estate tax entirely. The Senate bill allows rich parents to pass up to $11 million onto their heirs tax-free.

Maybe Dreamers? Senator Jeff Flake (R-Ariz.) says he is voting for the tax bill despite his concerns about what it would do to the national debt because GOP leaders promised him they would pass legislation soon to allow “Dreamers” (young people in the country without documentation who have gone to school in the United States and followed the law) to stay.

Senate Democrats/Filibustering. Democrats panned the bill as a “tax scam” that gives away a ton to the wealthy and corporations, but they were not able to stop the bill. Republicans were able to pass this massive legislation with just 50 votes in the Senate. Normally it would take 60 votes, but Republicans side-stepped any trouble from Democrats by using a clever tactic known as reconciliation where they are allowed to tack one major bill a year onto the budget and pass it with a simple majority vote (the tie is then broken by Vice President Mike Pence — we know how he will vote).

Sen. Bob Corker (R-Tenn.) He made a brave last stand Thursday night to try to force Republicans to change the bill so it wouldn’t add so much to the deficit. He was upset to learn that even after accounting for economic growth, the bill is still expected to cost $1 trillion. That was too much, Corker said, but in the end, his Republican colleagues passed the bill without him. Corker has already said he’s retiring from the Senate after his term expires after the 2018 election. It could be lonely for him in the Senate lunch room for awhile.

People who care about the debt. For years, many Republicans have railed against America’s growing debt that ballooned under President George W. Bush and then President Barack Obama because of wars, tax cuts and the Great Recession. The total debt is now $20 trillion (about $15 trillion is actually held by the public). The tax bill is likely to add at least $1 trillion more, according to the Joint Committee on Taxation, the official scorekeepers in Congress. In other words, all signs indicate the debt will continue to get worse in the coming years.

The poor. The Senate bill cuts tax rates across all income levels, but 44 percent of Americans don’t pay any federal income tax, so it doesn’t help them. Some senators — notably Marco Rubio (R-Fl.) and Mike Lee (R-Utah) — pushed to give more money back to lower-income families in the form of refundable tax credits. Rubio and Lee wanted to make a lot of the Child Tax Credit refundable. But that didn’t happen, meaning the poor won’t get much benefit from the bill. If anything, they might lose a lot — some won’t be able to afford health insurance anymore, and some are likely to lose other government benefits as Republicans look for ways to trim the federal budget in the coming months.

Puerto Rico. The island that was devastated by Hurricane Maria this fall now might lose some of the few big businesses that remain on the island if the GOP tax bill gets enacted. The reason is that Puerto Rico would no longer look so advantageous as a place to do business compared to the rest of the United States. Puerto Rico’s governor is trying to push for the island to be deemed a “free trade zone,” but that doesn’t look likely.

Harvard. The House and Senate bills create a new 1.4 percent tax on private college endowments worth over $250,000 per student. Only a handful of universities have such large endowments. Most are Ivy League schools like Harvard.

College students. The House bill scraps many popular deductions for college students and college grads with student loans. The House bill eliminates the popular student loan debt write off, and it forces graduate students who receive tuition waivers (sometimes as much as $20,000 or more) to count that money as income for tax purposes, even though they don’t actually receive money in their pockets. It would be a big hit, and many universities are saying it could heavily dissuade graduate study. The Senate bill does not make these changes.

Elderly with high medical expenses. The House bill gets rid of the deduction for huge medical expenses, which 8.8 million Americans (mostly elderly) currently use. The Senate keeps this deduction in place, setting up a major conflict to be worked out.