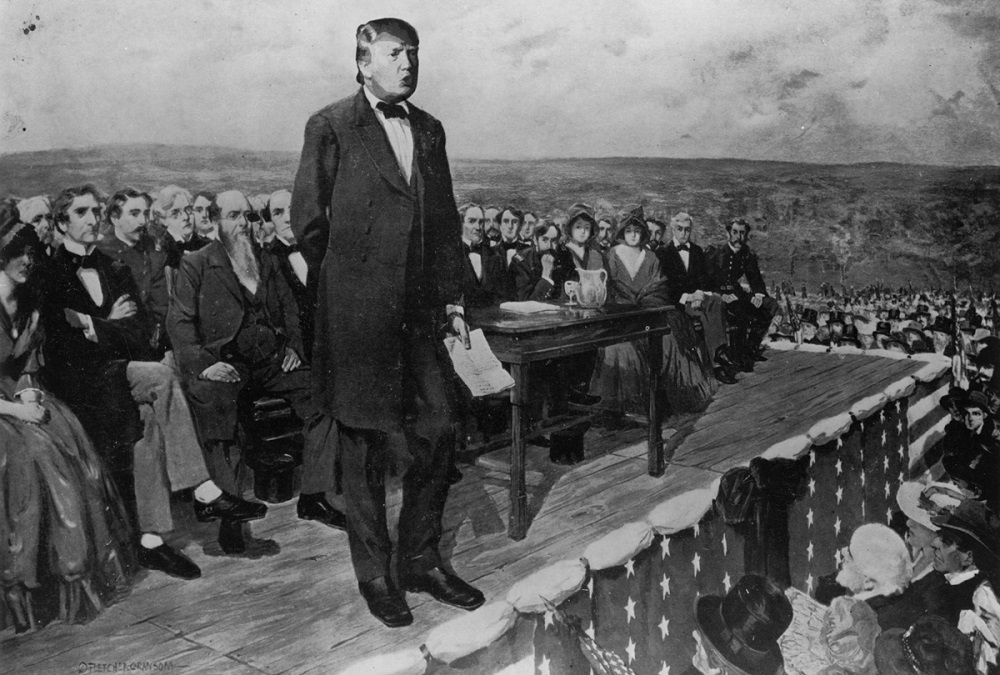 Donald Trump can obviously hear that clock ticking down to election day so he’s pulling out all the stops. At least, he’s ramping up his antics to the next level.

On Saturday, he decided to travel to Gettysburg to steal some thunder from where Abraham Lincoln gave his most famous speech. Trump has chosen to give what he calls another ‘historical’ speech to his people laying out his 100-day plan if he’s elected President. His chances of becoming the next President of the United States may be getting smaller by the week, but you’d never know it according to Trump and his diehard supporters who have come up with some of the craziest excuses ever for his comments and actions.

Below is a breakdown timeline of Donald Trump’s Saturday:

Donald Trump is laying out a 100-day plan he says will guide him if he makes it to the White House in 2017.

In the symbolic setting of Gettysburg, Pennsylvania, the Republican nominee on Saturday summarized the policy proposals he’s introduced over the course of the campaign.

Trump says he’ll clean up corruption by pushing for new congressional term limits and by increasing restrictions on lobbying by former government officials.

He says that he’ll deport without delay immigrants who are imprisoned for violent crimes. And he says he will cancel visas for countries that refuse to take such people back.

Democratic vice presidential candidate Tim Kaine has hired a transition director to help him prepare to take office should he and running mate Hillary Clinton win the election.

Turnage was Kaine’s chief of staff when Kaine was governor of Virginia. Turnage now is director of the District of Columbia’s Department of Health Care Finance.

Kaine says he asked Turnage to help because in recent weeks, “the prospect of winning is such that we better start doing some thinking about practicalities.”

Donald Trump is threatening to sue all of the women who have come forward in recent days accusing him of groping and sexual assault.

Trump says in a speech intended to make his closing argument to voters that the women are “liars” attempting to undermine his campaign. And he says all will be sued once the election is over.

Trump spoke in Gettysburg, Pennsylvania, on Saturday to lay out his earliest priorities should he become president.

He’s continuing to make the case that the election is rigged against him, and complains that “corrupt” media are fabricating stories to make him look “as bad and dangerous as possible.”

The Republican vice presidential hopeful told a Faith and Freedom Coalition gathering in Circleville that Trump is the right man to pick Supreme Court justices. He emphasized that Trump supports overturning the 1973 Roe v. Wade decision that legalized abortion nationwide.

The Indiana governor also says Trump would roll back a longstanding federal ban on churches engaging in explicit political activity, including endorsing candidates.

Some polls suggest Trump is falling short of GOP presidential nominees’ usual performance among white evangelicals. Pence told his listeners they would be “the difference makers in Ohio and all across America.”

Evangelical leader Ralph Reed says the political arm of his Faith and Freedom Coalition is engaged in an unprecedented outreach to conservative Christians in presidential battlegrounds.

Reed told a gathering Saturday at Crossroads Church in Circleville, Ohio, that coalition volunteers already have knocked on 772,000 doors in 10 states. He says a digital campaign has placed 32 million online ads on the devices of voters.

Reed was speaking at an event headlined by GOP vice presidential candidate Mike Pence. The Indiana governor is a favorite of evangelicals and sought to reassure them about GOP presidential nominee Donald Trump.

As of Saturday, more than 5.3 million votes have been cast, far ahead of the pace at this time in 2012.

Balloting is underway in 34 out of 37 early-voting states, both in person and by mail.

Hillary Clinton so far appears to be showing strength in pivotal states such as North Carolina and Florida. Donald Trump has shown promise in Iowa and Ohio.

In all, more than 46 million people are expected to vote before Election Day – or as much as 40 percent of all votes cast.

A new GOP ad in the Missouri Senate race acknowledges that Hillary Clinton is likely to be president and warns against sending a Democratic senator to join her.

It’s the latest example of an ad strategy that Republicans have begun employing as Donald Trump’s defeat looks increasingly likely.

Here’s the message: Elect Republicans to be a “check and balance” against Clinton.

The ads show the Democratic candidate in Missouri, Jason Kander, morphing into Clinton and claims the two are identical on issues including immigration and liberal Supreme Court justices.

The narrator says: “One Hillary in Washington would be bad enough, reject Jason Kander.”

Mike Pence is praising agriculture as an economic and cultural pillar of the United States.

The GOP vice presidential nominee is appearing at the Future Farmers of America convention in Indianapolis.

Pence received an enthusiastic ovation from 10,000 high school students when he mentioned: “the extraordinary opportunity my little family has today” on “a national ticket.”

According to federal data, that includes about 740,000 crop laborers who are immigrants working in the U.S. illegally. Those workers and their employers could be affected by Trump’s immigration proposals.

Look for Donald Trump to lay out his to-do list for the first 100 days of a Trump administration.

The Republican presidential nominee is set to give what’s being billed as a major speech on Saturday morning in Gettysburg, Pennsylvania.

Trump is trying to shift attention back to his priorities after weeks of campaign controversy.

Aides say the address is a first glimpse at the closing argument he’ll being making in the final two weeks of the race.

Hillary Clinton’s campaign says four people have been examined by medical personnel after a white powdery substance arrived in an envelope at a New York campaign office – and no health issues have been reported.

Police say preliminary tests showed the substance found Friday in an envelope at Clinton’s Manhattan office, where mail is received, wasn’t harmful. A police spokesman declined to identify what the substance was.

The envelope arrived late Friday afternoon. It was taken to Clinton’s Brooklyn headquarters and the 11th floor there was evacuated.