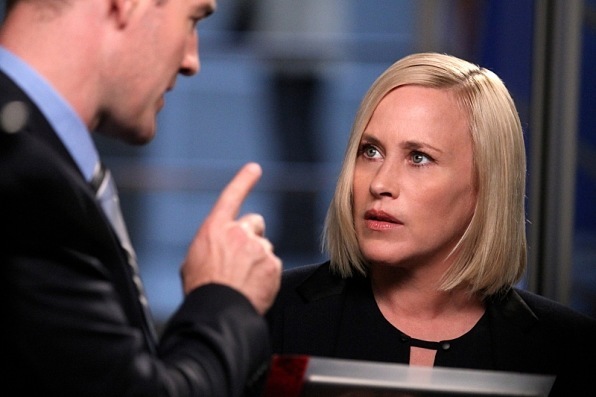 On this week’s episode of CSI: Cyber Agent Ryan got an urgent phone call from the mother of a missing 17-year-old woman named Zoe. A team of officers along with a police dog scoured a park in Washington D.C. where the young woman was photographed shortly before she disappeared.  Rescue workers found her cell phone lying on the ground in the park. Her father, Jordan Tan, then received a phone call from Zoe even though the FBI now had possession of her phone. Agent Ryan asked Mr. Tan to call back the number that Zoe had seemingly called from. When the call showed up on her phone as a call from Mr. Tan, Agent Ryan told him that Zoe’s phone must have been hacked into.

While Agent Ryan was talking about the case with Agent Mundo she told him that Jordan Tan was now a friend of hers and had been a patient of hers when she was working as a therapist. Agent Ryan balked at the idea that Jordan Tan could have had anything to do with his daughter’s appearance.

Raven and Agent Mundo searched Zoe’s bedroom for clues and found a tablet with a badly damaged screen. They then noticed that the cursor on her laptop screen moved even though no one had touched the computer mouse, leading Agent Mundo to deduce that not only was her cell phone hacked into, her laptop computer was too.

Daniel discovered a spoofing website was used to make it look like Zoe has gotten a call from her father when she hadn’t. He proved it when he called Agent Ryan’s phone from his phone and the incoming call on Ryan’s phone appeared to come from Nelson. Nelson also discovered that a text Mr. Tan received earlier that day looked like it was sent from Zoe even though it wasn’t.

Agent Mundo told Agent Ryan that Zoe’s laptop was connected to a malware program that lets hackers control the computer without its owner’s knowledge. Through a social media search Raven found hundreds of posts online from people commenting on Zoe’s disappearance. Some of the social media messages were directed towards Zoe telling her that if she was dead no one would miss her.

At FBI Headquarters Agent Ryan showed Mr. Tan the messages people online had written to Zoe. As they talked about whether or not Zoe was mad at anyone in her life Mr. Tan said that earlier in the year he had begun dating someone and that Zoe was not happy about it. As a result, Mr. Tan ended that relationship.

Nelson discovered that Zoe had an Internet boyfriend, Owen, for several months and that the last message he had sent to her on social media was sent the day before she disappeared. Nelson found the North Carolina address of the online boyfriend and Agents Mundo and Ryan went to pay him a visit. When Ryan confronted him about the last message he sent Zoe, which told her to come to North Carolina, he showed her proof that he hadn’t sent the message.

Agents Ryan and Mundo then determined that the person who had sent Zoe a message only pretended to be Owen. He then confessed that Zoe had unexpectedly shown up at his house that morning while he was hanging out with his real girlfriend and that the woman was upset with Zoe’s arrival.

At FBI Headquarters Raven was monitoring messages posted online concerning Zoe when she discovered a new post from Zoe. Raven also pulled up a video of Zoe in which she stated she was being bullied by hackers humiliating her on the internet. She said she believed the strangers who told her the world would be a better place without her. Zoe went on to say she knew who had created a website encouraging her to kill herself and that person had 24 hours to confess or they would be sorry.

Simon, the Deputy Director of the FBI, was given a list of usernames of people who were bullying Zoe through a social media network similar to Twitter. He was shocked to see his son Aaron’s screen name as one of the bullies and went to Aaron’s school to confront him about it. He told Aaron that if Zoe committed suicide he could be held partly responsible as one of her bullies. Simon then found out that Zoe’s classmates knew she knows how to shoot a gun and were afraid she would come to school and shoot them.

Agent Ryan received a phone call from Simon stating that Mr. Tan’s credit card had just been used to purchase a gun and that Zoe was the one who purchased it.

As Agent Ryan and Mr. Tan went to look for Zoe, Ryan realized that Mr. Tan himself was the hacker’s target, as opposed to Zoe. This sent Agent Mundo and Daniel to Zoe’s high school, where they realized Ariana Peterson, her guidance counselor, was the hacker. Zoe’s guidance counselor was the woman Mr. Tan was dating that he broke up with because Zoe didn’t like her. The woman blamed Mr. Tan for choosing Zoe over her. Since she confessed to Agent Mundo she was arrested for cyber fraud. Agent Ryan and Mr. Tan found Zoe alive at a cabin the family-owned. Zoe had accidentally shot herself in the gut trying to retrieve the gun she was keeping in her trunk. At the hospital, she announced she was leaving social media.