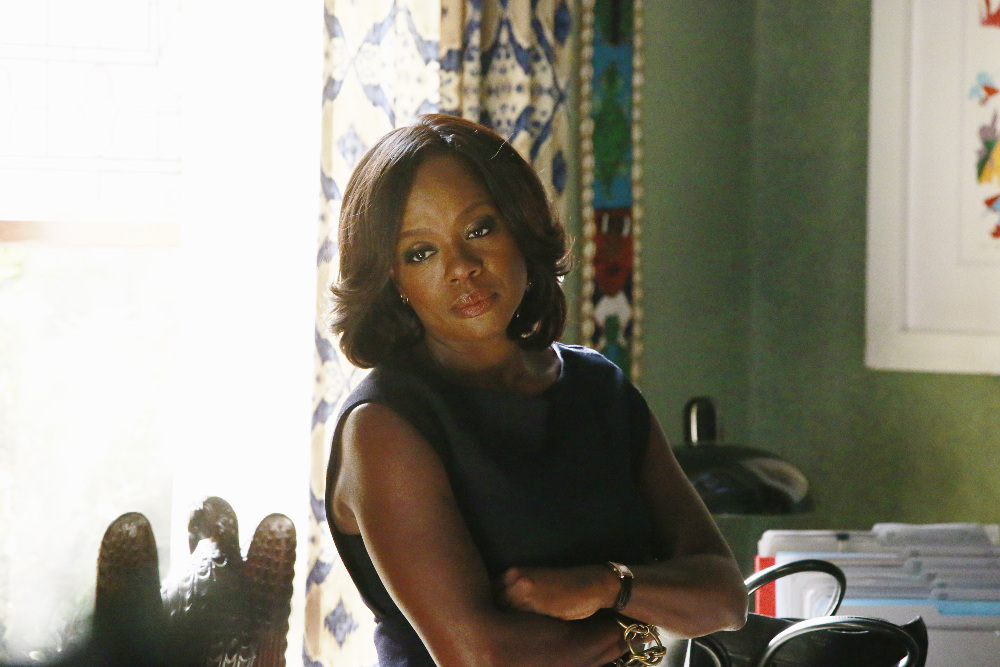 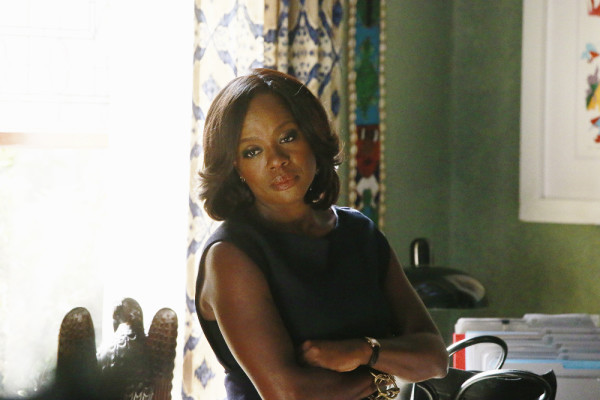 How To Get Away With Murder is on and popping this week with so much revealed. Nothing better than a title like ‘Skanks Get Shanked!’

We are given an extended view into the night in question in which Annalise and ADA Sinclair have been stabbed. The ambulance makes it to the house and gets Annie onboard but does she make it? We are still yet to know.

As for the story this week, which is four weeks before the incident at the Haptalls’, Annalise is in her tub, holding her breath under water when she gets a call, on Nate’s phone, from Nate’s wife. You know the one in the hospital dying. She requests her to come to her bedside, which Annalise does. When she gets there, she reveals, “I was afraid to come. I’m not a woman that gets afraid.”

Nate’s wife tells her how she feels about her screwing her husband and asks her an important question, “Do you love him?” Annalise doesn’t know how to answer that. “I need you to love him.” She then puts her hand out to Annalise and asks her for a favor. “I want you to help me end it; I want you to kill me.”

We don’t see her answer and are immediately taken back to Annalise’s house where they have a new client. A young college girl named Zoe, who has been accused of murdering her best friend.

Annalise takes the case and goes with the defense that Zoe met bad influences (two other girls) who made her kill her best friend. “An innocent girl that doesn’t deserve jail.” She goes the mental instability route.

Back at the house, after opening statements, Connor points out how everything Annalise said was done to Zoe, she did to them. Just then, Annalise walks into the room and calls Michaela to help her get to the bottom of the Hapstall case while Laurel and Connor try to find info to discredit the expert witness the prosecution is putting on the stand the next day. She sends her to find out if the Hapstalls are screwing.

Meanwhile, Asher is MIA because he is with his father, a lawyer, who is helping him make a deal with ADA Sinclair about the Lake Trotter mystery. Bonnie continues to call him, and he continues to lie to her about where he is. This prompts her to ask Frank about his guy who can trace calls. You see where that storyline is going.

As Annalise sits in the court, she flashes back to her conversation with Nate’s wife, and we are clued into what was said. She asks Annie to get her pills so that she can “end it” herself. Annalise is hesitant, but his wife tells her, “You owe me this.” Annie brought back from her zone out when the judge calls her to cross-examine the expert witness, a psychologist. She is given a recess being that she needs to regroup and during that time finds that the physiologist misdiagnosed a patient before who turned around and killed his own family.

During the recess too, Zoe’s friends are seen talking to her and walk away when Laurel and Connor come over. Connor sits down to talk to her and after speaking to her gathers that “she’s not a sociopath.”

At the Hapstall’s house, Michaela tries to reason with Caleb, and he’s pretty uncooperative. He doesn’t believe that anyone is on his side and gives her a hard time. She tries to find common grown with him, telling Caleb that she’s adopted too, and it appears she may be falling for him.

At the courthouse, Zoe’s phone has come up missing, and we later find that Laurel took because she just didn’t buy her story. She finds an app that young people use to share videos and in the video, it is clear that Zoe is the ringleader of the little group, killed her best friend and suggests killing someone else.

They show the video to her parents who demand that it be destroyed. Annalise obliges and lets Connor and Laure know. But Connor is not having it and can’t believe they are going to let it go. Annalise turns to Frank and tells him to get rid of all videos. He follows her into her office and gives her a bottle of pills.

We find out that Connor is the one who gave the prosecutors the video as he just couldn’t deal with letting Zoe get away with murder. Annalise finds this out and brings up the fact that Connor’s car, which has Sam’s blood stains, wasn’t stolen by Frank and that he better not EVER mess with her case again. I mean, literally, she put the fear of Zeus in that man.

Later than night, Michaela shares that she “has a boyfriend” referring to Levi and immediately West leaves to find him. When he does, tells him to stay away from Michaela because he’s playing with her emotions. Levi says that he will do anything to find out what happened to Rebecca and has found a lead. The lead ends up being connected to Frank, and somehow they find the place where Rebecca was buried.

Michaela takes another stab at interviewing the Hapstall siblings this time speaking to Catherine. She eventually finds out that she is a Virgin. They tell Annalise, take her to the hospital to see if it’s true and find out that it is. So no incest.

During the trial, the video that Annie had Frank destroy is brought in to evident by the prosecution Zoe’s mom is livid. She tells Annalise that she better fix it.

Nate shows up at the courthouse, and Annalise tells him that she went to see his wife. He asks her why and a flashback shows his wife telling her not to tell Nate that she plans to take the pills. So Annalise doesn’t.

Back on trial, Annalise cross-examines one of the girls accused of brainwashing Zoe. The girl says that they never liked Zoe they only wanted to be friends with the dead girl and Zoe can’t take it. She blows up in the courtroom yelling that they were nothing without her and that she better watch her back as she will be next. That bitch is hauled off to prison.

Annalise makes the trip to visit Nate’s wife one more time. And tells her that if she, Annalise Keating, who has done some messed up shit, doesn’t deserve to die, then neither does she. “Sorry, I can’t.” His wife is disappointed and tells her,  “I thought you’d do it, you’ve killed before.” She mentions Sam and Annalise walks out.

Whatever deal Asher worked out with the help of his father, is done. As his dad’s drives away, Bonnie has found him thanks to Frank’s friend. Asher tells her he knows that Nate killed Sam and Annalise is covering it up and “she needs to go down for it.” Bonnie tells him, “You’re wrong, I killed Sam.” Asher is shocked.

Back at the hospital, as Annalise walks out, she sees Nate and West having an intense conversation. Nate tells him that he should not have trusted Levi because he could have lied about being Rebecca’s foster brother.

In the end, with a flashback to the night Annie is stabbed, the crew, minus Asher, and Nate stop at an apartment and Michaela goes out to go inside. A man waits for her, and we see it is Caleb Hapstall who asks her, “How is she.”

Lord, I have no idea where it’s going, but I plan to find out.