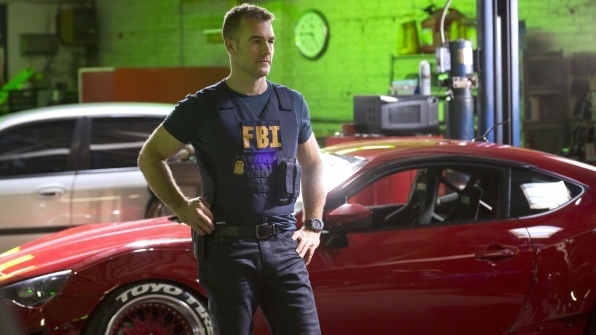 It’s Fast and Furious time on this week’s episode of CSI: Cyber, where the police broke up an illegal street race in L.A. In an attempt to run from one police one of the cars in the race hit a car head on. When the police looked in the race car, there was no driver. Brad Harper, the man driving the car that was hit head-on was killed instantly. Agent Ryan said someone had been playing Grand Theft Auto in real life.

Agents Ryan and Mundo went to a repair shop where the self-driving car was taken after the crash. They had found out that the repair shop was owned by a group involved in a huge drug ring. A woman there told him a driver went by the name smokescreen, and no one in the group knew his real name.

A man, Steven, stuck in traffic noticed his car was acting weird. When the traffic light change and he accelerated, he found he no longer had the ability to stop the car or even slow it down. The incident made national news and Russell and Raven saw the report. Agents Ryan and Mundo, as well as Nelson, then went to the scene to talk to Steven, who said the car seemed possessed and didn’t slow down until police showed up. They found a black box in this car too. They went to the repair shop and found a car hacking tool in one of the cars in the shop. Two of the people working there were arrested. Agent Ryan found out that of the two people, one named Carmen was working undercover for the LAPD. She told Agent Ryan she was going to blow their sting operation. She gave him information on Paul, the other person working at the repair shop that was under suspicion.

Raven realized one of the cars that was hacked into had a mirror in it that puts the car back in its lane when it veers away. Daniel logged activity in both the cars that had been hacked. He traced activity to a Los Angeles car wash. One of the guys working at the car wash was putting a tracking device in a car. Agents Ryan and Mundo suspected smokescreen worked at the car wash and told the owner they needed to talk to the employees. The guy that had put the tracking device in the car then left the car wash without telling anyone.

They figured out that a man confined to a wheelchair was a former drag racer that was the one hacking into other people’s cars. Mundo met with Carmen and said they needed her to race the suspect in the case so they could prove he was guilty. Carmen got the hard drive from Paul’s laptop and gave it to Mundo.

Smokescreen was revealed to be using ToggleFly to hack into cars. Agent Ryan said they had to find the cell number the car hacking tool was using to help the hacker find new victims. Daniel said he was going to control a self-driven car and have it race Smokescreen’s car. He hacked into the car Nelson rented in Los Angeles so he could steer it himself.

At FBI headquarters, they had a live feed of the car race between Nelson’s rental car and Smokescreen’s car, which he controlled remotely. Nelson was supposed to be out of the rental car before the race started, but he was in the car when Daniel started remotely driving it from D.C. They tracked the hacker’s phone and found out he was five minutes from where they were. Nelson disabled the computer and managed to stop the car before anyone was hurt or killed. Then Agent Ryan caught Smokescreen and confronted him about what he did. He was then arrested by FBI officials. Mundo found the original self-driving car but had to fight off Paul after he discovered Carmen tied up in the car’s trunk.