If you are a mover and shaker in Hollywood, want to be a mover and shaker in Hollywood or follow the happenings in Hollywood just for kicks, then you know that the last few months have been a whirlwind of craziness. This is mostly due to the outing and ousting of hundreds of powerful Hollywood men who have been found to be sexual predators to the 100th power. After the Harvey Weinstein story, we saw an onslaught of accusations followed by firings, criminal charges, ethics investigations, and dismissals. Needless to say, the women who finally stepped up and made their voices known started something that was a long time coming.

Emotions have been all over the place since. The initial shock by industry professionals and fans quickly turned to outrage, anger, disgust and for some, relief. For people like actress Rose McGowen, who has never been quiet about much of anything, the attention given to the prevalent rape culture or the pay to play (of sorts) policy that countless Hollywood heavy hitters used to get their rocks off is bittersweet. While most allegations against Weinstein were attempts at sexual assault, unwanted harassment, or inappropriate behavior, in her case, according to the actress, the man actually raped her. Her story, along with that of other well-known and not so well-known women, have shaped the current conversation about this awful open Hollywood secret.

The breaking of the Weinstein story has inspired several hashtag movements; the most popular of them being #metoo, long created by social activist Tarana Burke and made popular by Alyssa Milano in October 2017, and #timesup, which became a rallying cry for women during the 2018 Golden Globes. Other women who have been fortunate enough to escape the grips of famous sexual predators have stood in solidarity, especially during the industry’s first big awards ceremony of the year where the thing to do was wear black this past Sunday. I am here for the support that the victims/survivors are finding in those that sympathize with their plights, but solidarity is not enough. At this point, as fewer men are accused on a daily basis in the media of being monsters, where do we go from here? What now?

I ask this question because I believe in seizing the moment so that the impetus gained from such a powerful movement can be capitalized on for the greater good. We have pinpointed the people who have done wrong (and are still doing so as James Franco was recently found to be a sexual predator as well). Most of them are out of positions of power, thankfully. Folks have stepped up and shown their support emotionally, physically, and some even monetarily. Also, using individual platforms to bring awareness to the things that were happening behind closed doors in the offices and hills of Hollywood is helpful. But what can be done to turn the tide? How can we ensure that the kind of behavior that has crippled woman after woman and robbed many of their dignity, careers and, unfortunately, lives, ceases to be a thing within the coming years? Well, it all comes down to access.

Men are the gatekeepers to reaching the top of the latter in Hollywood. As such, many of those who have amassed the most power and the most money monopolized a woman’s ability to have access as an actress, writer, producer, etc. by abusing their positions. To really move forward from this point and to maintain that gross Hollywood men’s time is truly up, it’s going to take women in powerful positions to create opportunities so that the up and comings don’t have to go through questionable men to get ahead in their careers. This is how #metoo and #timesup will be more than trending hashtags for a few months. Reese Witherspoon gets this and is a great example of an A-List actress who knows a thing or two about creating avenues for women creatives to travel that are less likely to land them in someone’s hotel room or in someone’s dimly lit office.

Witherspoon had a noteworthy professional year in 2017, and a big part of it seems to have something to do with the creation of her production company, Hello Sunshine. According to the multitalented actress,

“…Hello Sunshine is all based on telling stories about women by women. So, we want to create more opportunity and hire more female directors and more female writers.”

She told People that her goal is to promote and elevate women in 2018 and beyond. Her HBO, female-led show Big Little Lies was not only a huge hit, but it also showed just how powerful and effective talented women can be when given the chance to lead. Witherspoon, along with other popular female actresses, has made it her goal to provide ways for women to have the access they need to do things on their terms and succeed. It’s this kind of action that is going to stop Hollywood sexual predators in their tracks. Imagine a situation where women don’t need to go through men to make things happen or have their stories told.

Rose McGowan highly criticized Meryl Streep’s idea to wear black at the Golden Globes in solitary of the #metoo movement. She addressed the veteran actress, via Twitter (the tweet has since been deleted),

“Actresses, like Meryl Streep, who happily worked for The Pig Monster, are wearing black @goldenglobes in a silent protest. YOUR SILENCE is THE problem. You’ll accept a fake award breathlessly & affect no real chance. I despise your hypocrisy. Maybe you should all wear Marchesa.” (Marchesa is Weinstein’s ex-wife’s clothing line).

Her relentlessness and position on the subject are understandable, and her call out of other female actresses to do more than lip service is not shade or pettiness on her part. It’s a real response from someone whose life has been turned upside down as a result of sexual assault and serves as a valid point of contemplation. And it’s a point that more people are finding solutions for thanks to the women who were brave enough to speak their truths. 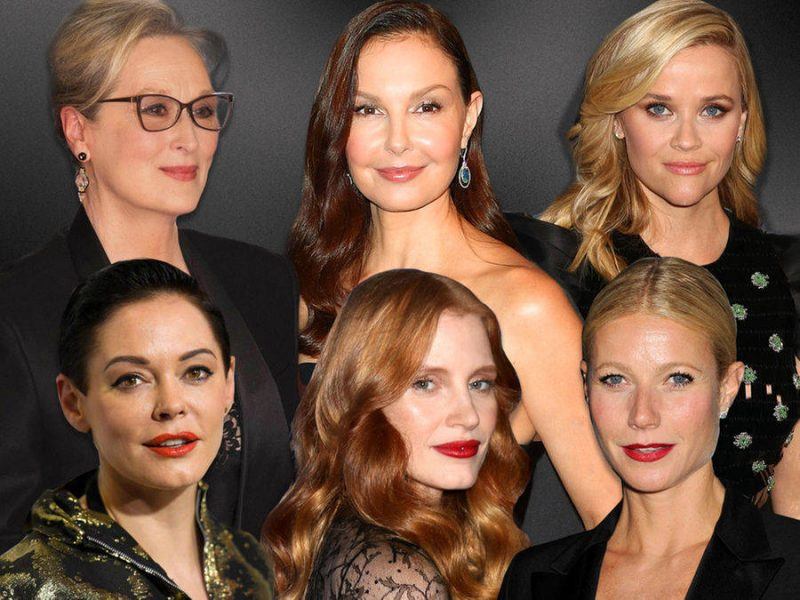 As the overall situation continues to unfold, I am looking to the Witherspoons, Streeps, Jada Pinkett-Smiths, Shona Rhimes’ and more to throw their influence behind initiatives and programs that put women in the driver seat of their professional destinies; creating a glorious world where we no longer having to rely on the intentions of famous, powerful men to live out our Hollywood dreams.