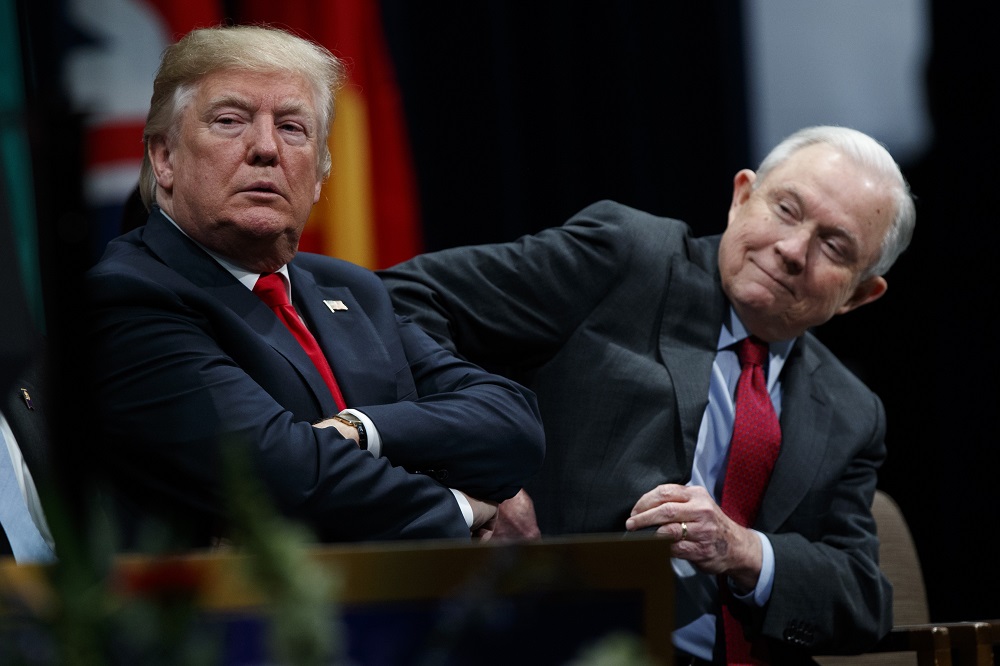 Donald Trump knew how to bring in the drama this week as his Supreme Court controversial pick Brett Kavanaugh continues picking up problems by picking on his favorite recent target, Rob Rosenstein. Washington was waiting with baited breath as the deputy attorney general visited the president not knowing the outcome but anticipated it wouldn’t be good.

This served as a great distraction as more women stepped up about Kavanaugh, but at today’s all over the place press conference with Trump, he let it be known that he’d rather keep Rosenstein now. We all know that this means ‘keep’ until the midterms and then fire him before the new people are sworn into office.

Most people in America barely know their congressperson’s name, but in the age of Trump, civics has become something many are back in the loop on. Many of us have made it a point of better understanding our government and how it works.

Another big point to understand is that Rosenstein also oversees things like the southern district of New York which has opened investigations into Donald Trump’s company and charity. If Rosenstein were to quit, Trump could easily put whomever he wants to oversee more of the investigations into himself. That would be like you being on trial and being able to choose your own judge. That’s how important his role is.

Rosenstein’s fate as deputy attorney general remains in the air after reports last week that he floated the idea of recording President Donald Trump. Rosenstein went to the White House on Monday expecting to be fired, but the president gave him a three-day reprieve, and the two are set to have a face-to-face showdown on Thursday.

So what happens to the Russia investigation if Rosenstein loses his job after Thursday’s meeting?

Here are a few questions and answers on most people’s minds:

WHAT IS ROSENSTEIN’S ROLE IN THE MUELLER PROBE?

Rosenstein is Mueller’s boss. Attorney General Jeff Sessions has recused himself from the Russia probe, to Trump’s great frustration, and left the duties of overseeing the investigation to Rosenstein. After Trump fired FBI Director James Comey, Rosenstein appointed Mueller as special counsel to take over the investigation. Rosenstein is acting in Sessions’ place to oversee the probe and has the power to fire Mueller — for cause — under Justice Department guidelines.

Rosenstein makes nearly all the pivotal decisions in the Mueller investigation, including signing off on indictments. In an interview with USA Today in March, Rosenstein said Mueller was “not an unguided missile.”

In an investigation kept decidedly out of the public spotlight, it was Rosenstein — not Mueller — who briefed the president and then stood before the microphones when indictments were announced. He did so most recently in July, when the Justice Department charged 12 Russian intelligence officers in the hacking of Democratic Party and Hillary Clinton campaign emails during the 2016 election.

WHO WOULD REPLACE ROSENSTEIN IF HE IS OUSTED?

Under the Justice Department’s succession plan, control of the Russia probe would be turned over to Solicitor General Noel Francisco.

He is the highest-ranking official after Rosenstein who has been confirmed by the Senate — a requirement for the position. The acting associate attorney general is actually ranked higher but would be ineligible because it is not a Senate-confirmed position.

But Francisco wouldn’t take over as acting deputy. Sessions would likely move his chief of staff, Matthew Whitaker, into that position. He would take over Rosenstein’s responsibilities outside the Mueller probe.

That would be a departure from the department’s regular succession plan, which would make Rosenstein’s chief deputy, Edward O’Callaghan, the acting deputy.

WHO IS NOEL FRANCISCO?

As solicitor general, Francisco is the president’s top lawyer who has successfully defended controversial Trump policies, including the travel ban, before the Supreme Court.

Francisco served in President George W. Bush’s administration, was a law clerk to Justice Antonin Scalia and was an attorney at the Washington law firm Jones Day, where he took on a number of conservative causes. The firm represents the Trump campaign, which could raise questions about whether he would have a conflict overseeing the Russia investigation. Francisco has recused himself from Supreme Court cases in which Jones Day represents a party.

If Francisco recuses himself from the Mueller probe, Steven Engel, the head of the Justice Department’s Office of Legal Counsel, would be next in line to take over the investigation.

WHY IS IT SIGNIFICANT WHETHER ROSENSTEIN RESIGNS OR IS FIRED?

The circumstances of Rosenstein’s departure would affect Trump’s ability to pick a replacement.

Under a law known as the Federal Vacancies Reform Act, if Rosenstein resigns, the president would have the power to temporarily move any Senate-confirmed appointee into the vacant post.

But Trump has less flexibility if he fires Rosenstein. The Justice Department would likely need to adhere to its succession plan, appointing Francisco as the overseer of the Mueller probe and Whitaker as deputy attorney general.

COULD THIS CHANGE THE COURSE OF THE MUELLER INVESTIGATION?

If Rosenstein were to depart, Mueller and his investigators would be losing the oversight of an official who has protected their work despite the relentless attacks of Trump and his congressional allies. Time and again, Rosenstein has signed off on critical investigative steps they have taken.

There is also no guarantee that Rosenstein’s successor would be willing or able to withstand the political pressures and be similarly supportive and protective of the work of Mueller’s team. 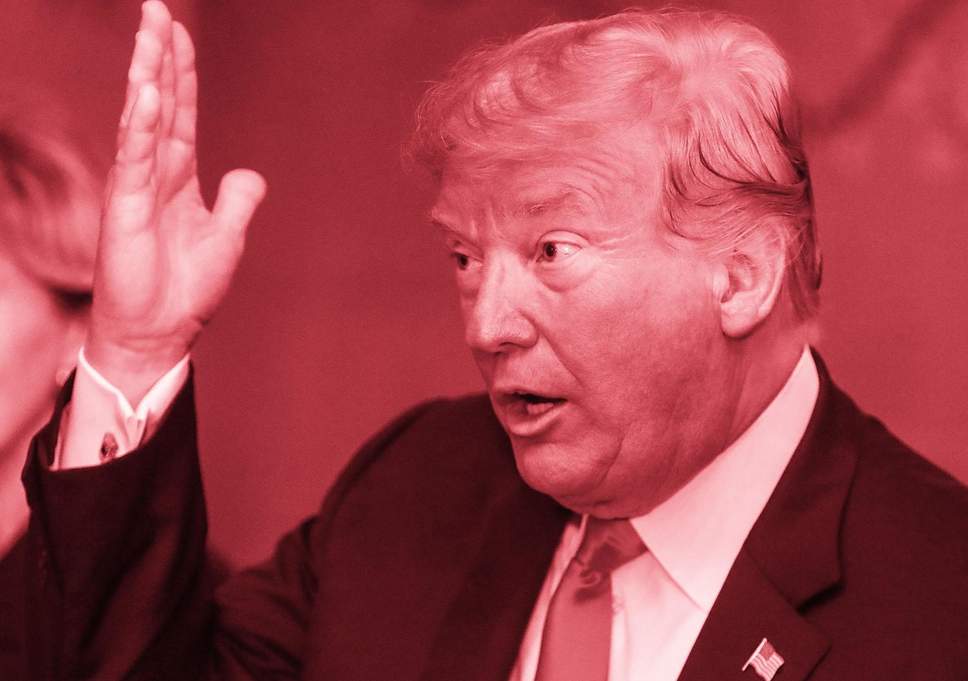 President Donald Trump said Wednesday that he would “certainly prefer not” to fire Deputy Attorney General Rod Rosenstein and that he may delay a highly anticipated meeting with the Justice Department’s No. 2 official.

Trump said Rosenstein denied making remarks first attributed to him in a New York Times report, including that he had discussed possibly secretly recording the president and using the Constitution’s 25th Amendment to remove Trump from office.

“I would much prefer keeping Rod Rosenstein,” Trump said at a news conference in New York. “He said he did not say it. He said he does not believe that. He said he has a lot of respect for me, and he was very nice and we’ll see.”

Trump added, “My preference would be to keep him and to let him finish up.”

Rosenstein is overseeing special counsel Robert Mueller’s investigation into Russian interference in the 2016 election and his dismissal would put that probe in jeopardy and create a political storm.

In suggesting that he might postpone Thursday’s meeting, Trump said he was focused on the extraordinary Senate Judiciary Committee hearing set for the same day with Supreme Court nominee Brett Kavanaugh and a woman who has accused Kavanaugh of sexual assault when they were teenagers.

“I may call Rod tonight or tomorrow and ask for a little bit of a delay to the meeting, because I don’t want to do anything that gets in the way of this very important Supreme Court pick,” Trump said.

The Justice Department referred questions about the scheduling of the meeting to the White House.

Any delay in the meeting would prolong the uncertainty of Rosenstein’s status. Rosenstein headed to the White House on Monday morning preparing to be fired and had discussed a possible resignation over the weekend with White House officials. But after meeting with chief of staff John Kelly and speaking by phone with Trump, he got a reprieve with the Trump meeting scheduled for Thursday.

Since then, the White House has sought to tamp down anxiety that Rosenstein would be fired.

White House officials called senators Monday to say Trump had said he wouldn’t be firing Rosenstein at the meeting, according to two people familiar with the conversations who spoke on condition of anonymity to discuss private discussions. Aides have advised Trump against taking any extreme actions ahead of the midterm elections with his party’s majorities in Congress already under threat.

“Not wanting to fire Rod Rosenstein is consistent with what I have understood for weeks, not just days,” said Rep. Mark Meadows, a North Carolina Republican who talks to Trump often.

Friends and former colleagues of Rosenstein say they didn’t expect him to step aside and give up oversight of Russia investigation and the enormous swath of Justice Department operations for which he is responsible.

Rosenstein, who has spent his entire career in government, “has tremendous loyalty to the department,” said former Justice Department lawyer and longtime friend James Trusty.

“He’s a very long-run, historical-minded guy in a lot of ways,” Trusty said. “I think he may have some confidence that history will be kinder to him than politicians are.”

Trump’s remarks Wednesday followed a chaotic period that began Friday with reports that Rosenstein had last year discussed possibly secretly recording the president and invoking the Constitution to remove Trump from office. The Justice Department issued statements Friday aimed at denying the reports, including one that said the wiretap remark was meant sarcastically.

Rosenstein appointed Mueller in May 2017, oversees his work and has repeatedly defended the breadth and scope of the probe. Trump has been critical of Rosenstein’s oversight of the probe, but the two have at times displayed a warm working relationship, and Rosenstein has been spared some of the more personal and antagonistic broadsides leveled against Attorney General Jeff Sessions.

Even if Rosenstein survives the week, it’s not clear how much longer he’ll be around. Trump has signaled that he may fire Sessions after the midterms, and Rosenstein could go with him.

But it could be sooner: Some officials around Trump believe Rosenstein’s reported musings about invoking the 25th Amendment could make it defensible for Trump to part with him, even during the final sprint to Election Day.

Rosenstein’s friends and former colleagues describe him as exceptionally committed to the Justice Department — one said he “bleeds” for the agency — and unlikely to leave on his own, though they say he respects the chain of command enough to resign if asked.

He joined the department in 1990, serving as a public corruption prosecutor, a Tax Division supervisor and a member of independent counsel Ken Starr’s Whitewater team. He was named U.S. attorney in Maryland by President George W. Bush and held the position throughout the Obama administration — remarkable longevity for a position that typically turns over with changes in political power.

Within weeks of being confirmed as deputy attorney general, he was engulfed in controversy by writing a memo critical of then-FBI Director James Comey, which the White House cited as justification for Comey’s firing.