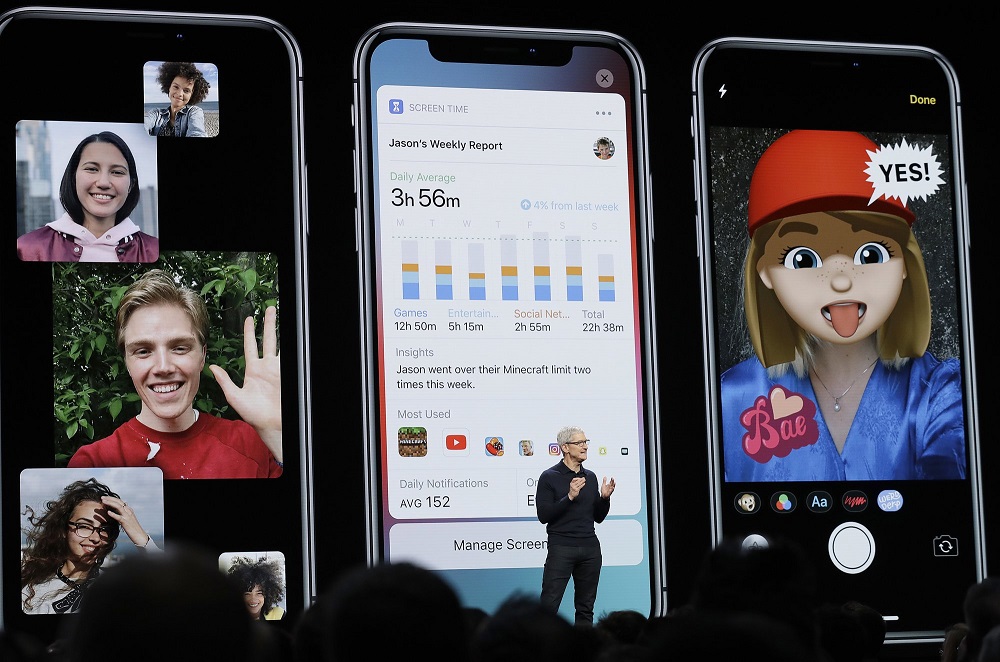 Let’s face it; it’s not just our kids that spend all their time on smart phones. We adults are just as guilty and usually have set the example of overusing screen time, but tech giants Apple and Google are working to change that.

Apple and Google want to help you spend less time on their phones — really. Like that time you checked Facebook at 3 a.m. Stats don’t lie.

Their new tools for managing screen time will let you see how often you picked up the phone after bedtime or how long you’re on Instagram at work (shame on you). Apple’s tools also let you control how long your kids spend on their devices, if you’re concerned that screens are taking time away from sleep, homework or exercise.

Apple’s tools launch Tuesday as part of the free iOS 12 software update for iPhones, iPads and the iPod Touch. Google’s controls are being tested on its Pixel-branded Android phones.

Here’s how the controls work.

Apple’s new controls for kids let you manage their time on their own devices, such as an iPad or a hand-me-down iPhone. Once you’ve got them set up, you can use your iPhone to check when your children are on their devices and what apps or websites they’re using. You can restrict particular classes of apps and even establish a quiet period when most apps shut down.

That latter “Downtime” feature is promising, though it has a few shortcomings. For one thing, it only lets you choose a single block of time each day, so if you’re blocking late-night hours, you can’t set a separate downtime for school hours. Plus, your selection applies seven days a week; you can’t set different hours for weekends unless you want to manually change the settings every Friday and Monday.

A new “Screen Time” feature lets you establish time limits for categories of apps, such as entertainment or games. In this case, limits can be different on weekends. You can also set limits app by app, or for specific websites, but it’s tricky. From the Screen Time settings, tap the chart at the top to get a list of apps and websites. Tap on an app or site, and look for “Add Limit” at the bottom.

Songs or podcasts playing in the background don’t count toward limits. If your kid has both an iPhone and an iPad, Screen Time can track time spent on both devices against your limits.

When apps run out of time, their icons go dark and the apps won’t send notifications. You can exempt useful apps, such as e-books or homework sites — or messaging and phone service for emergencies — from downtime and other limits.

It’s best to configure all this from your own device using Apple’s “Family Sharing” feature. You can set up limits directly on your children’s devices, though remote monitoring features might not work properly. Either way, you’ll need a passcode specifically for Screen Time. Be sure to pick one that’s different from your phone’s passcode, which your kids probably already know.

Kids can ask for more time with a few taps. If you ignore or decline the request, Screen Time isn’t supposed to let them keep asking. But for the moment, kids can just reopen the app to bug you with another request. Get ready for a digital version of “Are we there yet? Are we there yet?”

Apple already had parental controls for blocking R-rated movies, adult websites, and podcasts with explicit language, but the settings were buried. In iOS 12, they’re part of Screen Time. You’ll need to them on manually, or your kid can still watch R and NC-17 movies.

What you won’t get from Apple is any help in determining what kinds of limits to set. In fact, the clock is initially set to zero, forcing parents to make choices right off the bat instead of working from default limits. Apple says recommendations among experts vary.

Ultimately, it’s best to have a conversation with your kids about screen time. But having software block an app can be easier than pulling a device out of a child’s hands.

You can set the same limits for your own device, but it requires self-discipline. Want more Instagram? No problem — just tap for extra time. If you really need help, ask a friend or family member to set that Screen Time passcode and keep it secret.

Google has similar controls, called Digital Wellbeing, but they’re intended for adults (among other things, there’s no passcode, which limits their usefulness for setting limits on kids). This feature is currently only available on the company’s own Pixel phones, although Google plans to make it more broadly available in a forthcoming Android update called Pie.

ALL ABOUT THE SCREEN

Another Android feature will let you leech the color from your screen after a certain hour. This option, called “Grayscale,” turns everything monochrome, rendering apps — and, heck, the entire phone to some extent — less appealing, presumably making it easier to put the phone down. Apple has a similar setting, although it’s buried in the Accessibility settings for disabled users.

Google and Apple features also let you turn your screen amber during designated times. That reduces blue light, which can suppress melatonin and make it tougher to go to sleep.

Ultimately, though, technological tweaks can only go so far in helping you resist technology’s allure. It’s just like your desire to exercise more, eat better or get more sleep: It comes down to priority and discipline. At most, these tools can nudge you in the right direction.