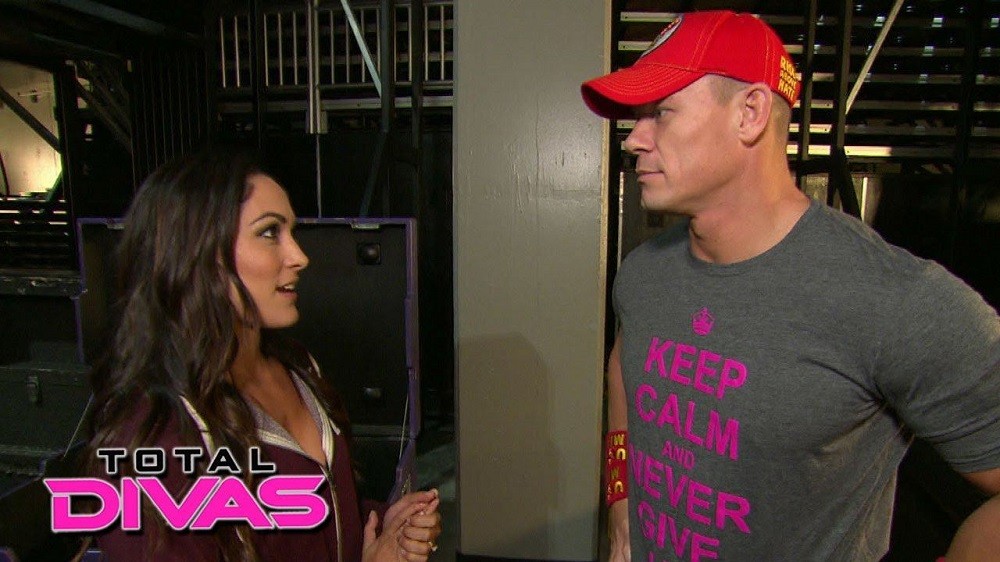 On this week’s episode of “Total Divas,” backstage at Smackdown Rosa talked to the girls about her baby shower. Paige said she loves Rosa but she can only take so much baby talk. She also said since her breakup with Kevin she had been doing badly in her matches and she didn’t want to keep hearing about the baby shower. Brie said she and Daniel Bryan were going to Washington State to look at properties to buy and she said she wanted to take Nikki with her.

Alicia said Team Bella has been dominating the Divas division but they might be taken off the road for a while due to Nikki’s injuries. Alicia said she was flying her mother and sister to her home in Jacksonville to deal with family issues. She needed to tell them that Preachy, a friend of the family is very sick and it makes her sad. Paige said she wished she could be there for Alicia but Paige’s family needed her more.

In Washington, Brie, Nikki, their brother and Daniel Bryan went to look at houses. Brie said she wanted a house there but Nikki said she couldn’t imagine living there. Alicia said she and her mother and sister have grown apart and that she has to spend time with them instead of going to Rosa’s baby shower.

Nikki said she was shocked Brie was considering a property that was practically in the woods and that she didn’t know if she’d be able to visit them there. When Nikki saw the property was empty she asked where the house was and Daniel and Brie said they wanted to have their own house built.

Alicia drove her sister Christina to the airport to get their mom and talked to Christina about how their family doesn’t communicate anymore. She said her mom has a history of bailing on her and that she hoped she didn’t do so again. Christina said she didn’t think their mom knew how to cope with life.

Brie, Nikki, their brother and Daniel arrived at a cabin Brie and Daniel were renting in Washington while they looked for a property. Backstage at RAW Rosa said Paige had been withdrawn. Rosa then found out that Eva Marie and Mandy were not coming to her baby shower. Paige admitted she had been standoffish with Rosa lately and wanted to tell her why. The Big Show asked Paige if she was OK and she said she was. Paige said she didn’t want to deal with the baby shower because of a huge secret she has that no one knows about. She then confessed that before she came to America and started wrestling for the WWE she had gotten pregnant and lost the baby before it was born.

Alicia and her mom and sister met with Preachy, their family friend. Alicia said she had been holding the weight of his illness on her shoulders and then found out her mom already knew Preachy was sick.

Nikki said Daniel Bryan looks at her like a glam girl that is high maintenance so she would camp out overnight with him and Brie to prove him wrong. When Daniel told Nikki she’d have to use an outdoor restroom that night she refused to. Nikki said she didn’t want to put her girl parts on the line. There was a bet between Daniel and Nikki that Nikki wouldn’t spend the night outside and she caved and said that he had won the bet.

Paige said she had to make an MTV appearance the same day as Rosa’s baby shower, giving her an excuse to ditch it. Rosa said it sucked that she couldn’t come and that no one was coming even though she invited all the divas in the locker room.

Alicia and her family went out for dinner and she said she was made that her mother knew Preachy was sick but hadn’t said anything to her about it. She said that it really hurt her feelings that she wasn’t a priority for her mother.

Nikki and her brother Jay went fly fishing and Nikki said she wanted to prove to Daniel Bryan that she could catch dinner. Brie said their town in Washington was perfect and living there was going to be amazing. Nikki said everyone in her life had grown up in the past year and it was making her feel insecure because she wasn’t ready to.

Alicia said her mom loved to play the victim and her mom was upset with Alicia because Alicia was upset with her. Alicia said she made her mother cry and that upset her because she didn’t want her mother to be upset. She said she was tired and wanted to be the daughter for once. Her mom then told her Alicia better hope she never has to be a single parent and that she had raised Alicia on her own as best she could.

At Rosa’s baby shower the guests took photos in front of a green screen. She said she was putting on a big smile even though the divas were not at the party. Paige met with the host of Ridiculousness and said that as the special guest she had to view pre-chosen YouTube videos.

Much to Rosa’s delight, Paige showed up at her baby shower afterwards. Paige then confessed to Rosa that she had been pregnant and lost the baby. She then hugged Rosa and said she was sorry. Paige confessed she had named picked out for her baby but it didn’t work out for her.

Daniel, Brie, Nikki, and Jay went to a wine bar for dinner. Jay said the Northwest was beautiful and he was sure that Brie and Daniel would love it. Brie said Nikki is always negative and she felt like Nikki was being selfish. Nikki said she felt like Brie and Daniel were moving to Washington because they didn’t want Nikki to be around. Brie and Daniel said they both loved having Nikki as their third wheel.